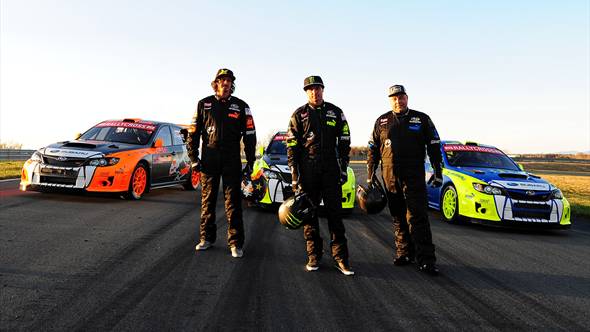 The team will compete in 2012 Subaru WRX STI rally cars that have a fresh new look for rallycross featuring a unique Zombie Cat graphic. PUMA brings a fun and colorful design aesthetic that, when mixed with the adrenaline of the sport, is sure to excite drivers, fans, and spectators alike. Mirra, Lasek, and Isachsen will sport official fireproof PUMA racing suits emblazoned with Zombie Cat graphics, and a new performance-racing shoe called the PRX Subaru. PUMA will be releasing lifestyle footwear, tees, and accessories inspired by the team and rally cars beginning in June.

“The sportlifestyle that PUMA represents is a great fit for Subaru, owners, and motorsport fans”, said Dean Evans, Chief Marketing Officer for Subaru of America, Inc. “We are pleased to align with another global brand, and one that will enhance the image and awareness of our rallycross team.”

“Subaru builds incredible sports performance vehicles and in working with them, we were able to apply our creative design approach with the graphics and color application,” said Antonio Bertone, Chief Marketing Officer for PUMA. “We are thrilled to be working with Subaru, they have a long, successful motorsports history that matches well with our brand.”

Rallycross debuted in the United States at Summer X Games 16 in 2010. Modeled after the popular European sport of rallycross, the US version pits drivers against each other for side-by-side racing on surfaces that vary from dirt, asphalt and a 70-foot gap jump. Competitors progress through a series of timed heats to the final race where winner takes all. Multiple drivers start at once and fight for position in the final four-lap race. The GRC takes the best attributes of circuit, off-road, and rally racing that results in intense competition in venues that are fan-friendly.

The six-round 2012 GRC will be in venues across the United States including the Charlotte Motor Speedway, Texas Motor Speedway, New Hampshire Motor Speedway, Las Vegas Motor Speedway, and Summer X Games 18 in Los Angeles. GRC has teamed up with the NASCAR Sprint Cup Series, NASCAR Camping World Truck Series, and the IZOD IndyCar Series at popular racetracks to provide weekends of action-packed, racing excitement for the fans. ESPN will broadcast the races live, channel information and times to be released at a later date.