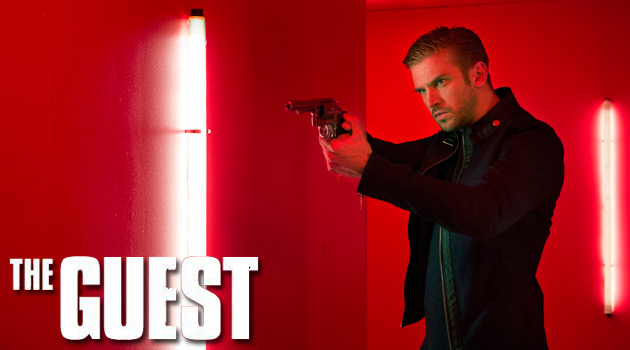 Adam Wingard’s new genre-bending film The Guest is screening at Sundance Next Fest in Los Angeles on August 10th at 4pm at the Theatre at Ace Hotel, and we’re giving away a pair of tickets to one lucky winner!

In The Guest, a soldier (Dan Stevens) introduces himself to the Peterson family, claiming to be a friend of their son who died in action. After the young man is welcomed into their home, a series of accidental deaths seem to be connected to his presence.

You can watch the teaser trailer below:

This thriller / homage film is unlike anything you’ve ever seen and features a haunting performance by Dan Stevens. If you’re in the Los Angeles area and are interested in going to the screening, it’s super easy to enter. All you have to do is follow Guys Gab on Twitter and re-tweet our contest message (below).

Want to win tickets to a screening of #TheGuest at Sundance Next Fest in LA on August 10? RT for your chance to win! pic.twitter.com/J7VNsGH2eK
— Guys Gab (@GuysGab) July 29, 2014

Related Topics:Dan StevensThe Guest
Up Next