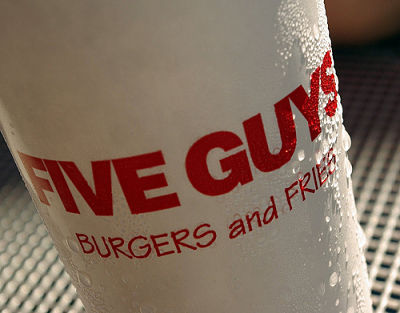 A few years ago, a friend told me about this wonderous burget joined called Five Guys. I had never heard of it before, but apparently they were pretty huge in the South. I checked their website, and I saw that one had opened up about 10 minutes away from home. So we decided to check it out. And so began my obsession with Five Guys Burgers!

Most fast-food burgers barely resemble a burger, and most “upscale” burgers try too hard to be something they’re not. Five Guys keeps things simple, using high quality meat to put out great burgers that remind you of home. Ever grill burgers in your backyard? That’s what these taste like. It’s a hard thing to describe, but all it takes is a single bite to see what I’m talking about.

Five Guys is pretty barebones. It has just three menu signs hanging above two registers. Behind that is an open kitchen with a griddle, fry station, and a center island. I thought “Wow this is it?” I am not sure what I was expecting but in my mind I thought it would be some kind of hamburger wonderland.

When you look at the menu, you’ll notice a few things right away. One, there are not a lot of options – Hamburger or Cheeseburger, Hot Dog, or Grilled Cheese. If you get a burger, do you want a Junior (one patty) or Regular (two patties)? How about Bacon? And lastly, do you want fries with that? (A word of warning, they give you a TON of fries.. Go with the small size unless you’re 400lbs)

You also get to choose what toppings you want for your burger. They’ve got quite a selection, but I keep it simple – Just put some ketchup and mustard on my Junior Cheeseburger! 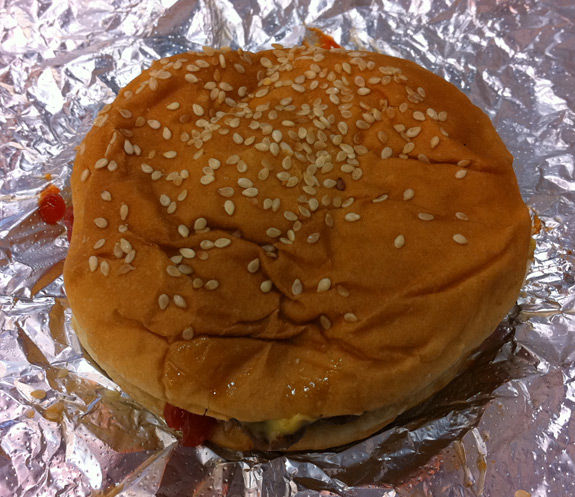 But you can load your burget to the gills with toppings if you like. My buddy ordered his with lettuce, tomatoes, and ketchup. 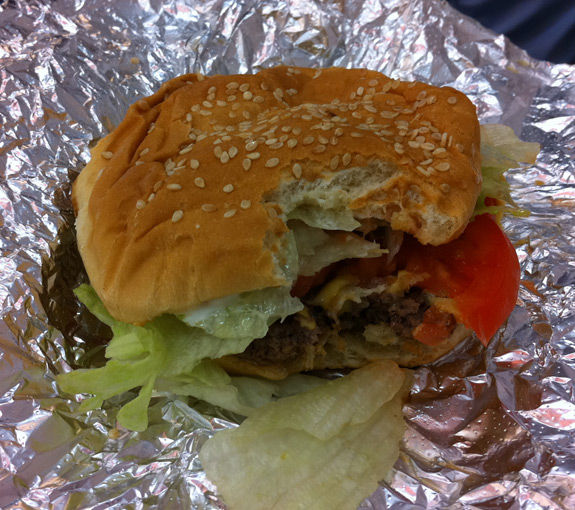 The burgers are a little pricey – A Junior costs around $4, and a Regular costs $5.50 or so. But you get what you pay for.. Most of us don’t think twice about spending $10 on a burger at Red Robin or Houlihan’s, because that’s just the cost of eating a burger at a proper restaurant. Think of it like that, and eating at Five Guys is an absolute bargain! 🙂

Lastly, there’s an East Coast / West Coast battle that’s been going on forever. West Coasters think In-N-Out is the second coming of Jesus. I think their burgers suck! But don’t take my word for it, check out the California Burger Wars, where Five Guys wins the battle!

Still reading this? Get off the computer, get in your car, and head down to your local Five Guys. Afterwards, come back and tell us how much you enjoyed it!

Related Topics:Five Guys Cheeseburger
Up Next