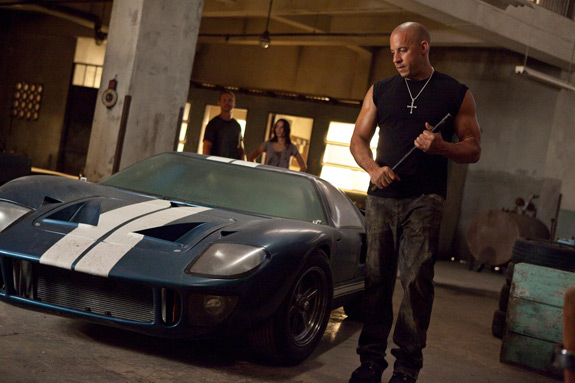 More than you can afford.. GT40

I’ve been a huge fan of the Fast and The Furious franchise, even if there were a few mis-steps along the way (Tokyo). But the trailers for Fast Five had me concern that they had shifted the focus away from the cars, and turned it into another generic action movie. So when the movie came out last Friday, I decided to wait and see what the reviews were like before plunking down $12 for a ticket.

Fast Five grossed $83.6 million over the weekend, making it the highest grossing film of 2011. With impressive numbers like that, I had to see what all the fuss was about. My wife set my DVR for The Voice, and we headed down to the movie theatre!

And here’s the official synopsis:
Since Brian and Mia Toretto (Brewster) broke Dom out of custody, they’ve blown across many borders to elude authorities. Now backed into a corner in Rio de Janeiro, they must pull one last job in order to gain their freedom. As they assemble their elite team of top racers, the unlikely allies know their only shot of getting out for good means confronting the corrupt businessman who wants them dead. But he’s not the only one on their tail.

Hard-nosed federal agent Luke Hobbs (Johnson) never misses his target. When he is assigned to track down Dom and Brian, he and his strike team launch an all-out assault to capture them. But as his men tear through Brazil, Hobbs learns he can’t separate the good guys from the bad. Now, he must rely on his instincts to corner his prey…before someone else runs them down first.

I thought the movie fired on all cylinders. (Pun intended) The movie brings back cast members from the earlier movies, and brings them together for “one last job” worth $100 million. Think Ocean’s Eleven or The Italian Job, with a lot more action and violence.

Whether you’re in it for the action (my buddy saw it for The Rock, even though he hadn’t seen the previous FF movies) or the cars (plenty of souped-up cars, racing scenes, etc), you’re sure to walk out of the theatre happy. There’s even some new eye candy to compete with Jordana Brewster! (And ladies love Vin Diesel and Paul Walker, so it’s a win-win)

Now, I wasn’t 100% sold on the car choices, but I have a feeling some of the decisions were corporate-driven. Seriously, automatic Dodge Chargers for the final chase sequence?! I guess we’re supposed to be impressed with the power of the Hemi, and rush down to our local Dodge dealerships now. And don’t even get me started on the 4-car “race”, that might have been the lamest thing I’ve ever seen in the entire franchise.

Seeing that Knight XV roll off the plane was pretty awesome, as I’d only seen that bad-boy on the pages of the DuPont Registry. But the highlight for me was the 2011 Subaru STI. I was hoping that the STI would get more screen time, but I was happy that it was included at all. As a former Porsche guy, seeing the 996 GT3 was pretty cool, but I would have preferred if they had used a 997 GT3 instead.

As for the race during the credits, c’mon now. An R35 GT-R against a Challenger? Not even close! (But be sure to stay through the end of the animated race, as there’s a bonus scene afterwards with a pretty huge jaw-dropper)

Final Thoughts: Definitely worth the price of admission, great to see the old gang back together, and something for everyone. Go see Fast Five!

Upcoming Movie Releases That Have Me Excited