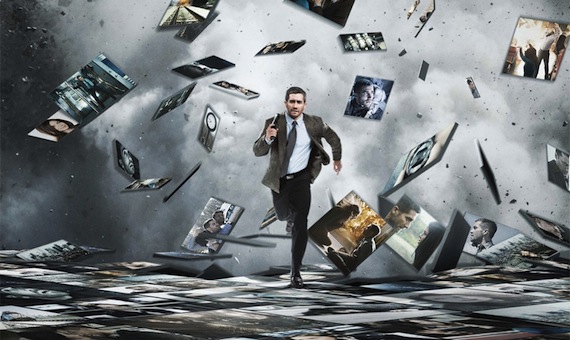 Personally, I thought the trailer looked ridiculous.. But IMDB gave the movie a 7.9/10 with nearly 9K votes, and Rotten Tomatoes gave it a 90%. Figuring all those people couldn’t be wrong, I decided to give the movie a chance..

And here’s the official synopsis:

When decorated soldier Captain Colter Stevens (Jake Gyllenhaal) wakes up in the body of an unknown man, he discovers he’s part of a mission to find the bomber of a Chicago commuter train. In an assignment unlike any he’s ever known, he learns he’s part of a government experiment called the Source Code, a program that enables him to cross over into another man’s identity in the last 8 minutes of his life. With a second, much larger target threatening to kill millions in downtown Chicago, Colter re-lives the incident over and over again, gathering clues each time, until he can solve the mystery of who is behind the bombs and prevent the next attack.

It sounds like an interesting premise, but it just didn’t work for me. The whole science behind the Source Code is flawed, and the movie suffers as a result. There are so many plot holes and unanswered questions, and there are dozens of threads on the IMDB boards talking about it. I was most curious about Dr. Rutledge. Who was he, and what was up with his leg? Why give him an obvious physical ailment if it’s never going to be explored any further?

The movie itself just dragged on for me. The train sequence was shown over a dozen times, and I felt like I was in Groundhog Day. I was bored out of my mind. Ironically, my wife loved the movie (though I think Jake Gyllenhaal might have had something to do with that). While I was yawning, she was crying. Chicks, go figure!

And then there’s the ending, which caused the guy behind me to yell “What the hell just happened?” My wife was equally confused.

By the time I left the theatre, I had a better sense of how the ending was supposed to be interpreted. But that’s because I’ve watched enough episodes of Hereos to understand the dynamics of time travel, and how changes in the past affect the future. Clearly, the audience was confused.

I’ve read a lot of reviews that compared Source Code to Deja Vu and Inception. If you liked those movies, you’ll probably enjoy Source Code as well. But it just didn’t work for me.