We hear a lot about cars that want to be airplanes, but what about the airplanes that aspire to be cars?

Man has dreamed of flying since the day he began walking. The urge to take flight has manifest in many forms, from Icarus and his wings to the Montgolfier brothers in their balloon. this urge has taken.. well.. flight. Eventually, the Wright brothers figured out how to get themselves airborne and aircraft as we know them were born.

Once airplanes became relatively commonplace and capable of doing something other than making controlled crashes, automotive designers immediately began looking to them as inspiration whenever words like “streamlining” or “air flow” were muttered.

About a decade after the Wright brothers made their first glorified puddle jump, a man named Marcel Leyat invented a propeller-driven car that looked suspiciously like an airplane without wings.

From there, it was mostly downhill. With no brakes. 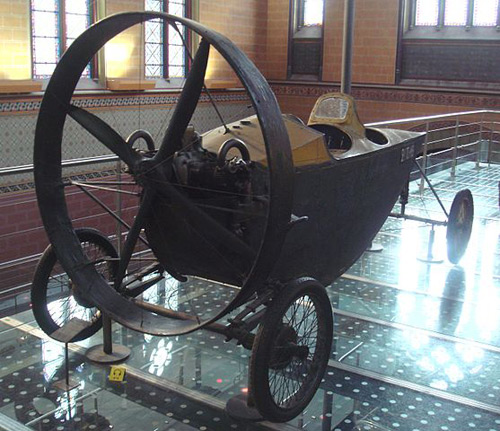 Known as “the plane without wings,” the nickname was appropriate to the car’s design. Basically a fuselage with tandem seating, four bicycle wheels, and a huge four-spoke propeller encased in a “protective” ring, the Helica was ugly, unsafe, and totally impractical. In short, it was the perfect experimental machine. A real man’s experiment, if there ever was one.

This was a weekend garage build gone horribly right. Built out of plywood, the Helica weighed a whopping 550 pounds, some of which was due to its horrendously overpowered 8 bhp engine. It took a while, but in 1927, the Helica was allowed to drive on the Monthery circuit and reached a top speed of.. wait for it.. 106 miles per hour. Yep. 550 pounds, 8 bhp, and 106 miles per hour. He immediately sold thirty of the things to people willing to risk getting pureed so they could fly on the ground. 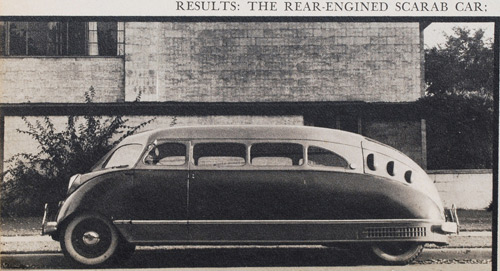 With safety in mind and air travel now a firm part of human nose-flipping at the gods, new automotive ideas were largely a mix of designs based on fish, yachts, and occasionally flightless birds. Then came an aircraft manufacturer named William Stout. With such a robust name, he was destined to become the next big thing in automotive. Unfortunately, he was not so good at coming up with catchy monikers for his creations, so the aircraft-inspired Stout Scarab was doomed from the beginning.

Most of us would love riding around in a beetle-shaped car modeled after the safety and efficiency of aircraft at the time were it named the Zephyr or the Angel or some such. But scarab? Even Volkswagen wasn’t stupid enough to get overly literal with the naming of their cars. Er..

Anyway, the Scarab was shaped like the beetle from which its unfortunate name comes from, but inside it was all about air flight on four wheels. It was piloted by a driver who was separated from his passengers like pilots in an airplane are and had seating for many, but didn’t come equipped with stewardesses. It was powered by a rear-mounted Ford V8 and Stout managed to sell a few of the things before giving up. To this day, it’s believed he blamed the Scarab’s failure on its Ford engine rather than his ill-advised naming of the car.

When all else fails, blame the outsource personnel. Still works today. 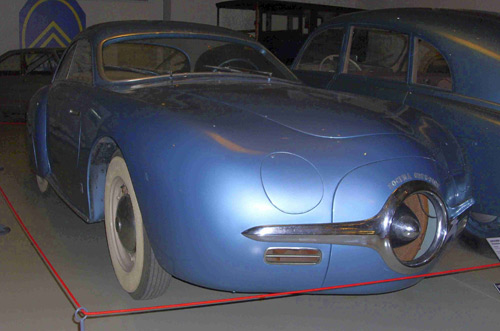 Interestingly, the fish trends in automotive design continued, as fins and O-shaped grille work began to dominate. During this, however, a dreamer named Jean-Albert Gregoire came up with an idea. The Frenchman was already an automotive legend since inventing front-wheel drive in 1920, pioneering the use of light alloys and aerodynamicism in the 1940s (largely based on fish, coincidentally) and so forth. In an epiphany of thought, however, he copied the English and decided to put a jet engine into a car.

Unlike the staid folks at Rover, who farted around with gas turbine engines and then saw them as nothing more than explosions waiting to happen, Gregoire was undeterred by mere threats of immolation. After all, France had only just won the war a few years before, so it made sense that they would once again show the world how it was done and build a car powered by jets. The uncouth Americans would totally rip this off a few years later with the Chrysler Turbine, those scabs.

Gregoire turned to aicraft maker Socema (Societe de Construction et d’Equipments pour A’Maginotnoworkons I think) and gathered some engineering buddies from various French firms whose names we can’t pronounce. Over escargot and cheap wine, they concocted an aerodynamic body that would make Elon Musk green with eco-envy and stuffed a jet turbine inside it.

Cranking its turbine to a mere 25,000 RPM, the aluminum-bodied car was capable of no miles per hour because it was in danger of baking itself and whoever was in it. Plus it didn’t have any brakes, which to anyone designing in the realm of badass should be an afterthought anyway. The good news? The Socema-Gregoire is still up with the times, having its own Facebook page and everything. 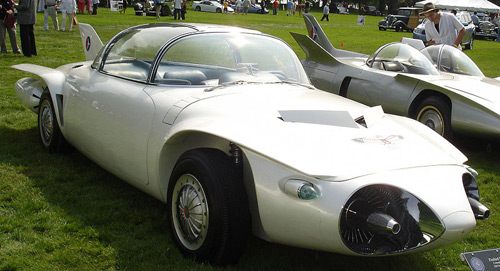 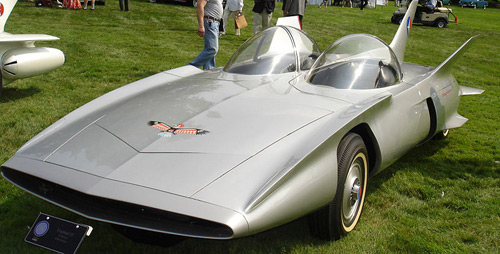 Of course, great ideas rarely happen in a vacuum. While the French were busy building rocket cars, we Americans couldn’t be leaving well enough alone either. Harley Earl, possibly the greatest automotive designer of all time, was working at General Motors, which at the time didn’t have “government” in its name. Name your kid Harley and it’s guaranteed that he’s either going to wind up trailer trash or bitchin awesome. It’s kind of a coin toss, but adventurous parents everywhere have taken the plunge.

In Earl’s case, having two first names probably helped him avoid a lot of confusion, so would-be parents take note. His idea was to make something really, really cool, call it a Firebird, and then make a movie about it involving beer and a big rig. Ever since Einstein had solved the beer atom splitting problem, the beer drinker’s worries had moved on to issues of transport. So why not fly it on the ground?

Thus the Firebird I was born in 1953. Although it would be years before Harley’s dream would manifest in the personage of a Pontiac, the idea was all there. Looking distinctly jet-like, the Firebird I had several problems: it only sat one person and it had no cargo space for beer. A few years later, still hard at it, Earl released the 1956 Firebird II, which was far more practical. Plus it had two turbine intakes at the front and a bubble canopy, ensuring that it would forever be associated with comic books. Still not good enough, mostly because the tail fins were way too understated, Harley hit the workbench again and in 1959, the Firebird III was showcased. Much to the chagrin of beer runners everywhere, though, the vision of hauling bottles of suds had been forgotten in favor of lots of tail fins and big breast-shaped cock-pit bubbles. Which is how the GM marketing department described the car’s appearance. In their heads.. 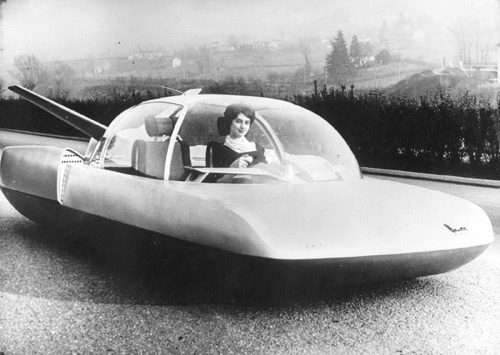 While Alfa Romeo was busy building cars that looked like bats, the folks at now-defunct Simca were envisioning grand things involving electricity and radar and “electronic brains.” These visionaries, who were later quelled by Chrysler before they could get too uppity, came up with a car that had all of that and more. In fact, it was so futuristic that it was nothing more than a plastic shell with a glass bubble on top and dreamy literature about a future filled with self-driven cars and electronic brains capable of bringing up maps of anywhere in the world and seeing what was happening on the street when the last car festooned with cameras and gadgetry floated by to beam the information to satellites through a network of electronic brains and intelligent telephones. These people were obviously nuts. 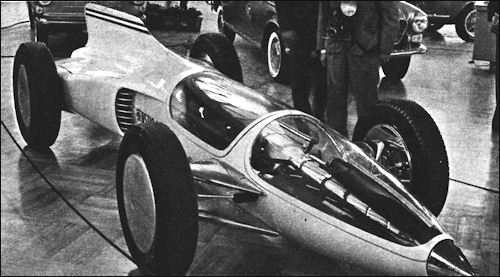 While the Star Jet wasn’t the last car to be made that involved a lot of aircraft influence, it was the last one that made people go “Holy fat guy on a pogo stick, Batman, that is as cool as it gets!”

Will Ford Succeed In Making The Fusion The World’s Best-Selling Car?