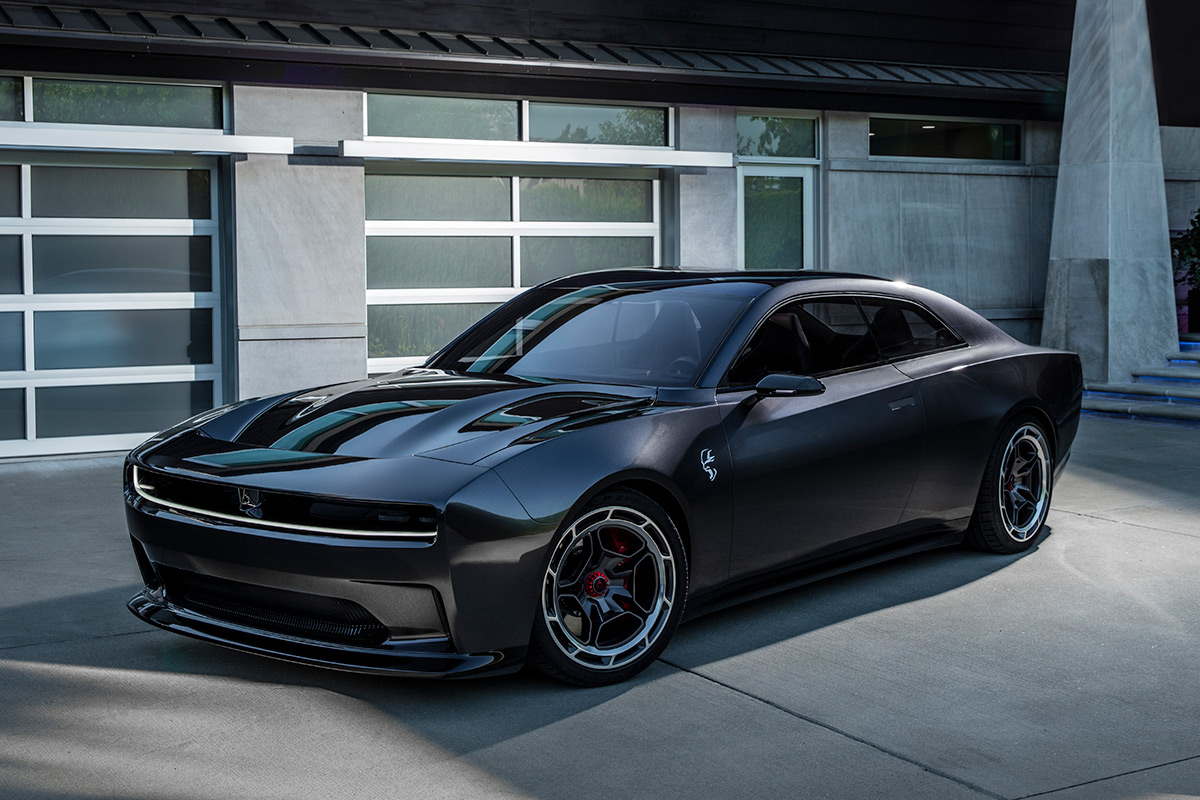 When Dodge announced earlier this week that they would be discontinuing the Challenger and Charger next year, MOPAR enthusiasts the world over were up in arms. But we weren’t exactly surprised, because as much fun as these cars are, they are gas-guzzling dinosaurs living in an ever-growing green world.

But fear not, because as Dodge showed us tonight, they’re not about to turn their back on their muscle car heritage as they transition to an electrified future.. they’re just changing the rules a bit, debuting an exciting new eMuscle car that’s a total game changer for the world of EVs! 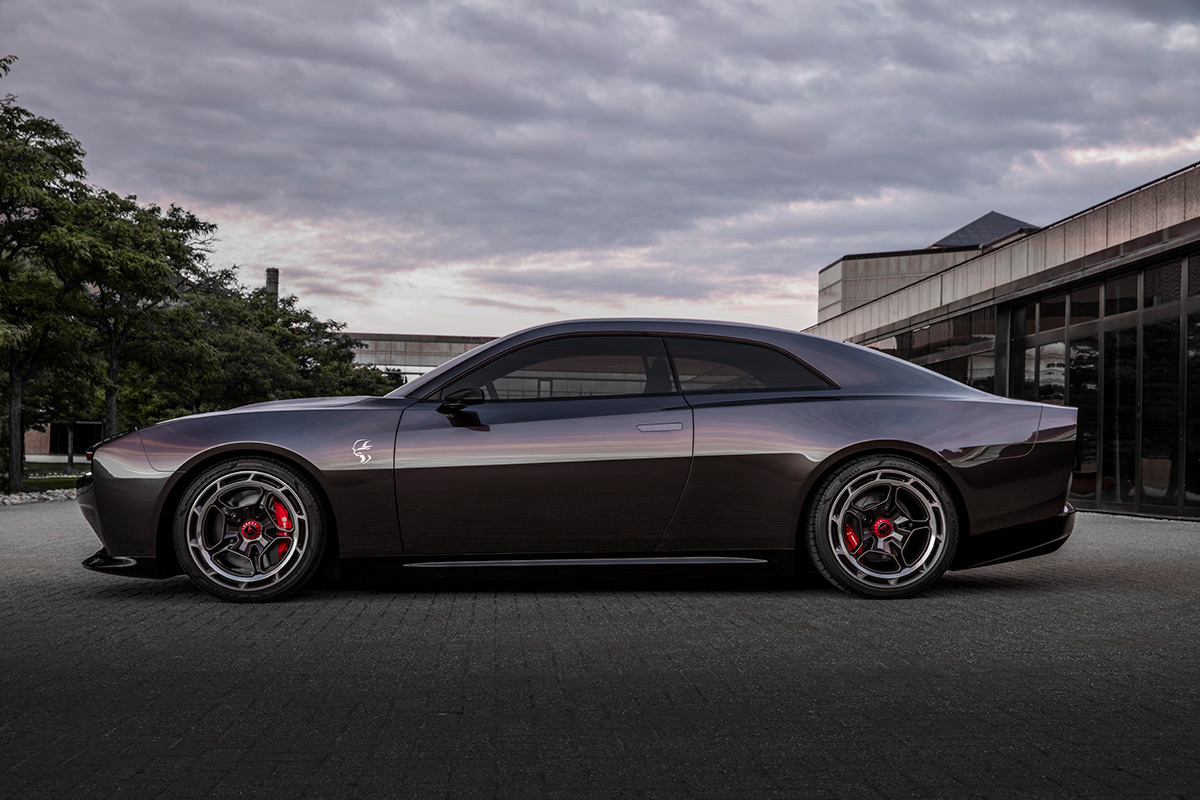 The concept’s modern exterior styling incorporates subtle Dodge heritage cues while also exceeding aerodynamic targets. Interior design elements connect to create a driver-centric, immersive experience through sounds, displays and lighting features that change inside and out at the push of a button.

Core to the Dodge Charger Daytona SRT Concept are three game-changing, patent-pending features that will rewrite the rules of the BEV segment: 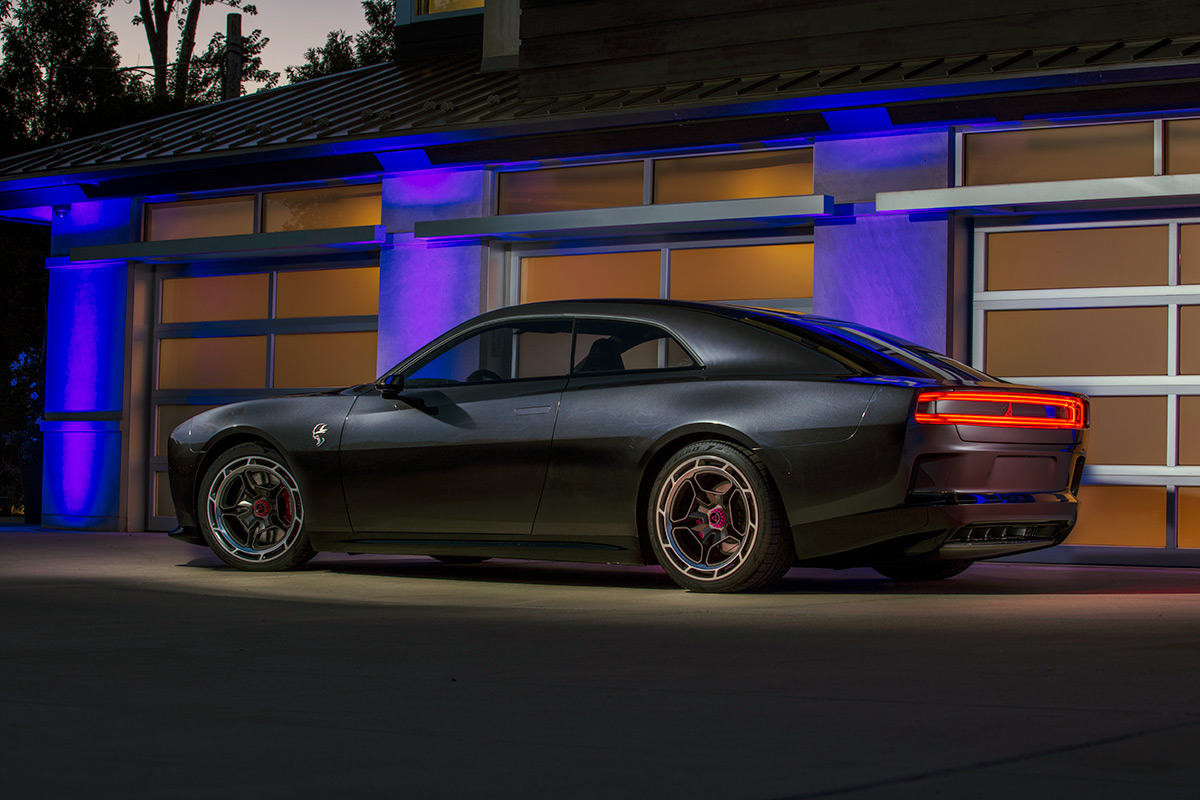 “The Dodge Charger Daytona SRT Concept exists because performance made us do it,” said Tim Kuniskis, Dodge brand chief executive officer, Stellantis. “Dodge is about muscle, attitude and performance, and the brand carries that chip on its shoulder and into the BEV segment through a concept loaded with patents, innovations, and pertformance features that embody the electrified muscle of tomorrow. The Charger Daytona SRT Concept can do more than run the car show circuit; it can run a blazing quarter-mile. And when it comes to product cycles, it outruns Darwin. The Charger Daytona does more than define where Dodge is headed, it will redefine American muscle in the process.” 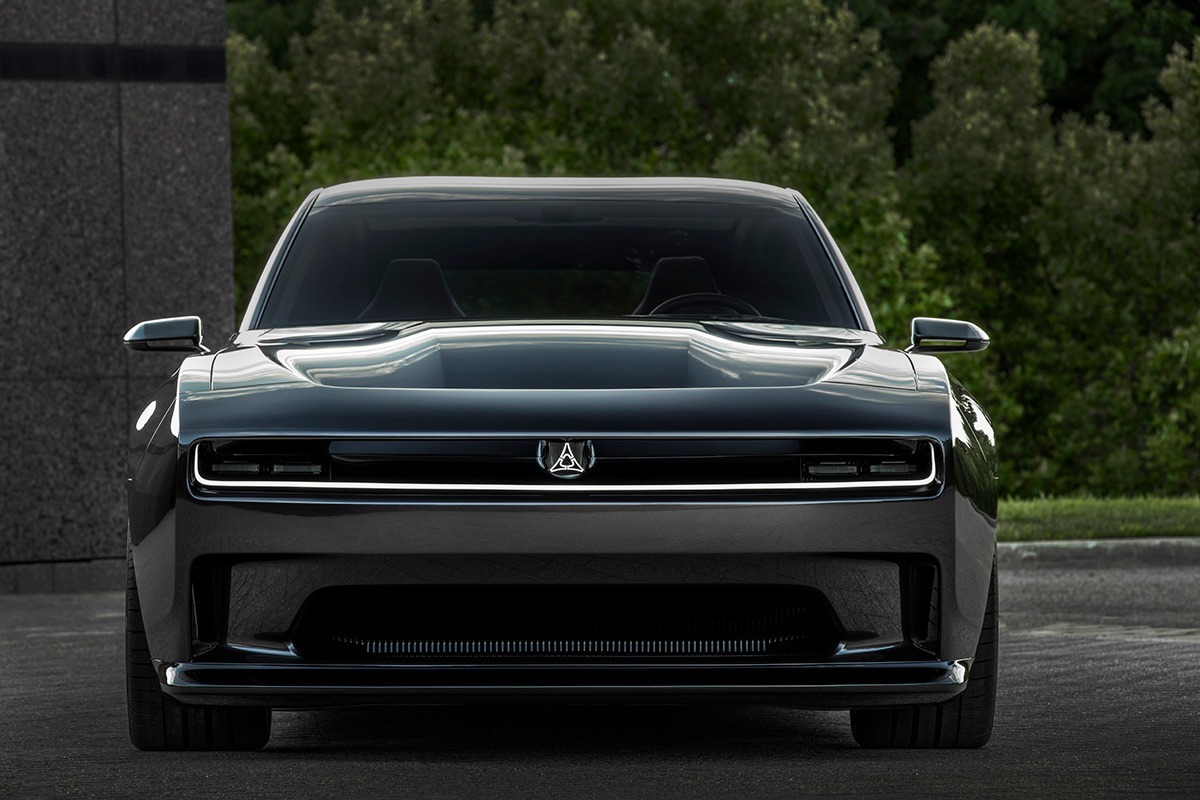 It does so courtesy of a new propulsion system that joins high-horsepower household names such as HEMI, Hellcat and Redeye. There’s a new pinnacle of performance in the Brotherhood of Muscle: Banshee. 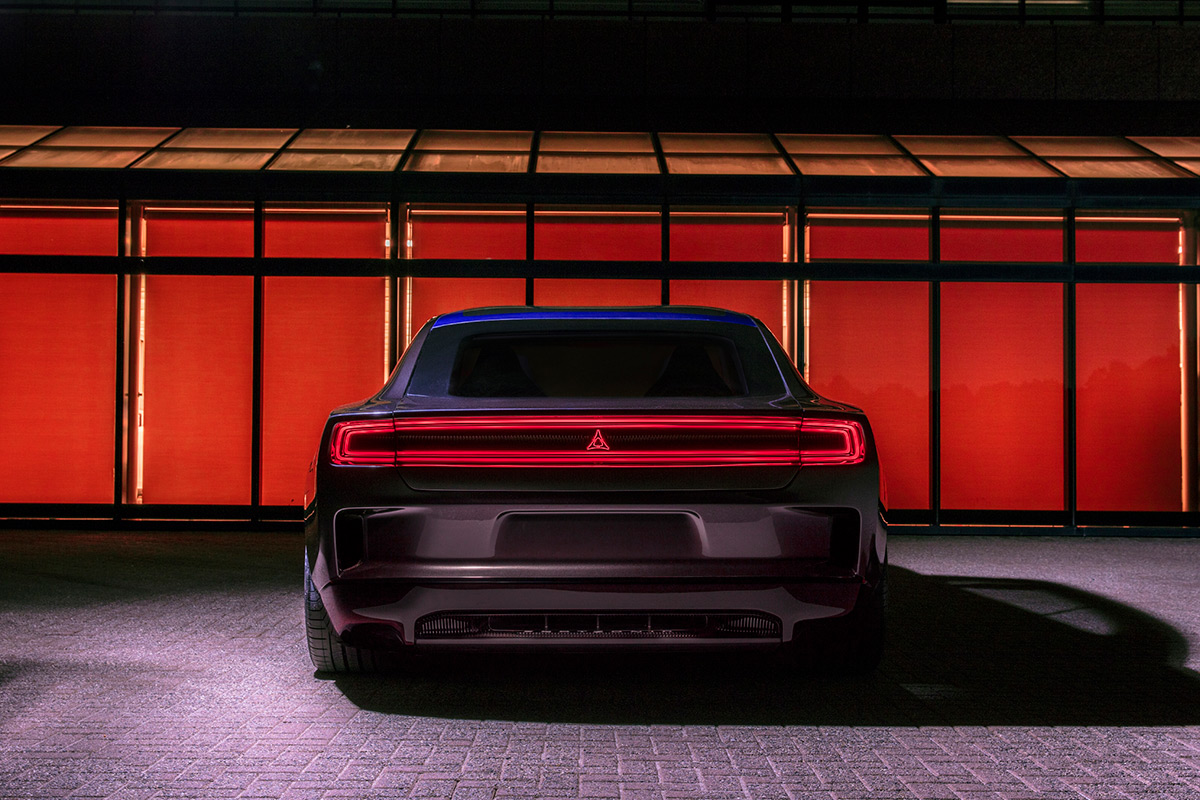 The industry-first Fratzonic Chambered Exhaust pushes its one-of-a-kind performance sound through an amplifier and tuning chamber located at the rear of the vehicle. The Fratzonic Chambered Exhaust represents the next generation of tactile, bone-shaking, muscle attitude, creating a visceral “Dark Matter” sound profile experience in concert with the eRupt transmission. 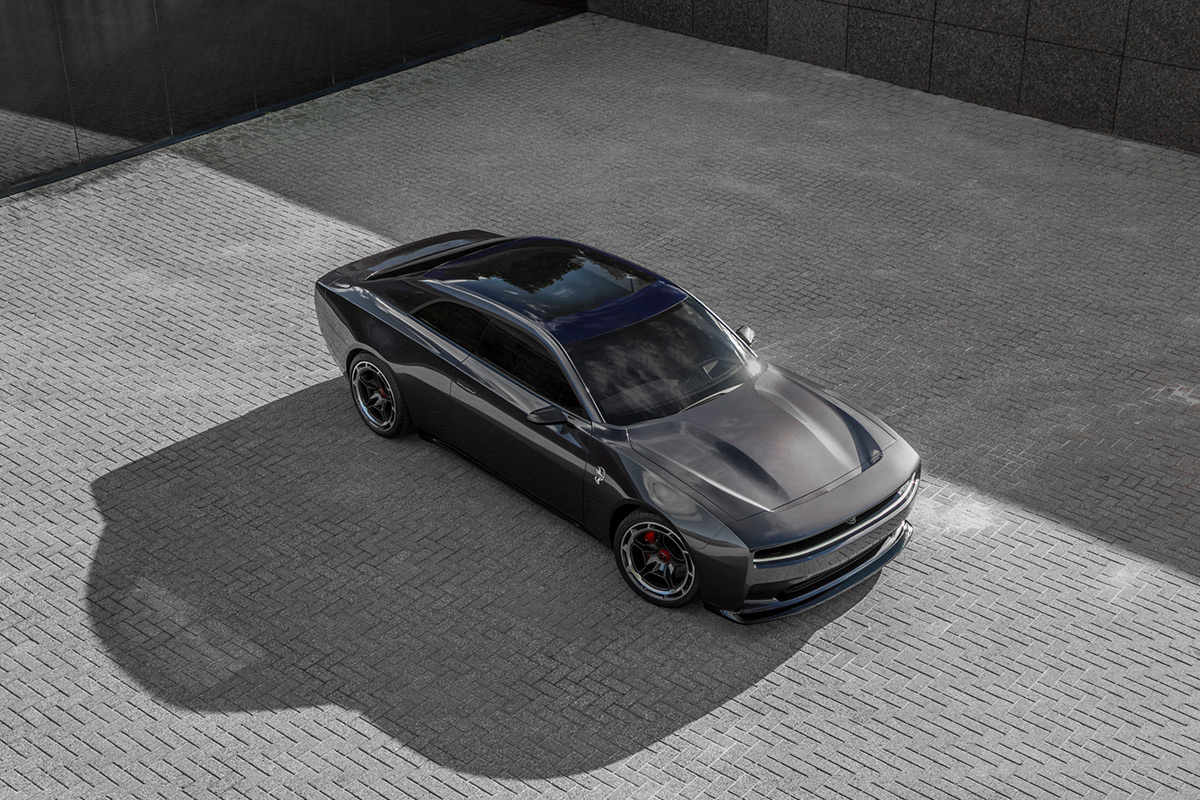 Dodge Design, First and Foremost
The Dodge Charger Daytona SRT Concept features inspired design that takes on the challenge of revolutionizing the look of a BEV while offering subtle nods to the brand’s muscle car past.

The R-Wing, an homage to the original Charger Daytona design and to a key figure behind development of the original vehicle, allows air to flow through the front opening, enhancing downforce. Incorporated into this functional performance hood, the front R-Wing holds true to the brand’s dramatic exterior themes while delivering an aerodynamically improved pass-through design. Carbon-fiber intakes tucked into both sides of the front and rear lower fascias provide an air curtain to assist in aerodynamic performance. 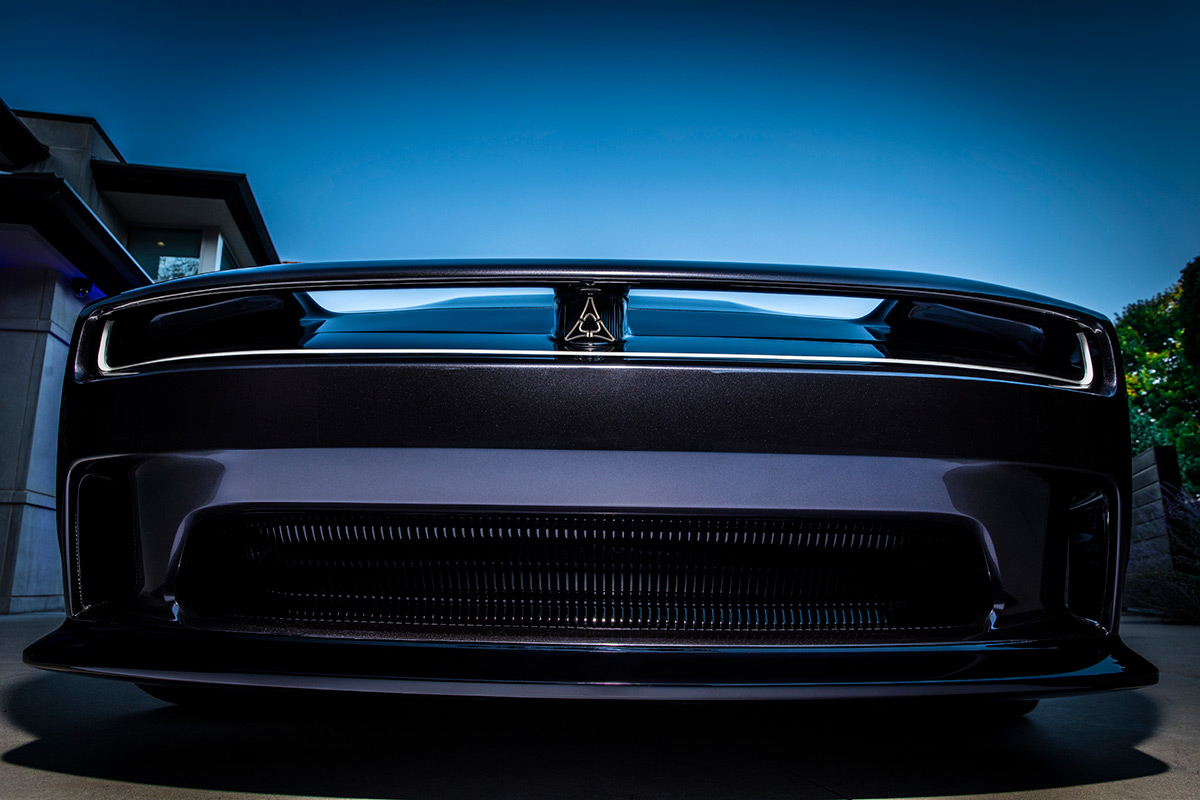 The Charger Daytona SRT Concept combines modern looks with a long, wide and confident road presence. The front grille stands out with cross-car illuminated lighting centered by a white illuminated Fratzog badge, a symbol teased last year by the Dodge brand. The three-pointed Fratzog badge, originally featured on Dodge muscle cars from 1962 through 1976, was previously used without any meaning or context — until now. The return of the Fratzog logo represents the electrified future of Dodge and signifies the brand’s unwavering commitment to its performance heritage, but with new technology capable of pushing limits well beyond the cars of today.

Simple, vertical details on the front grille add texture while calling back to the brand’s heritage, specifically the iconic 1968 Dodge Charger. The concept distills performance to its simplest form, enhanced by a typically playful Dodge exterior color name, Greys of Thunder, that gives a high-gloss graphite feel with deep textures. The concept’s “waterline” tracks around the sides and gives a planted look while emphasizing the upper portion, keeping the visual weight up high. Subtle, muscular shaping of the wheel fenders accent the body styling. 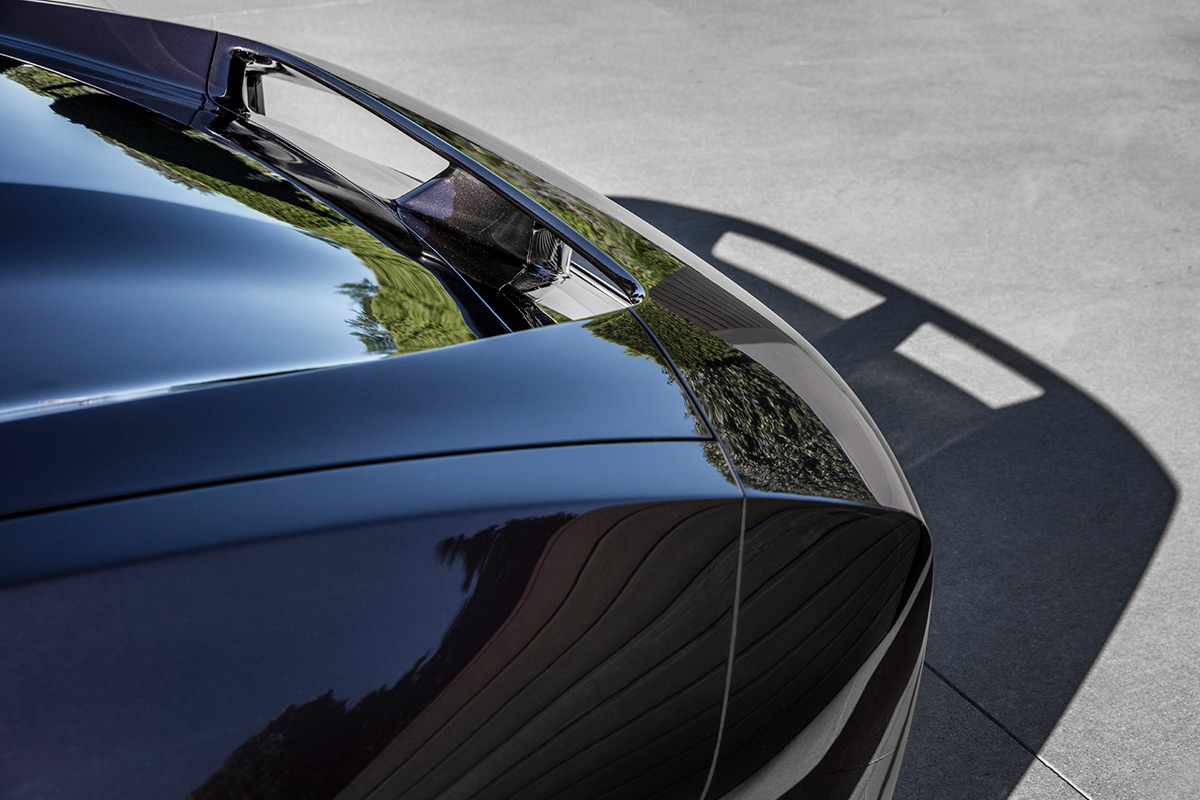 A new hatchback design is highly functional, giving the concept a dual personality: a beast at the track that can still meet every day needs. The design, along with rear seats that fold flat, offer unexpected utility and storage capacity from a muscle car. 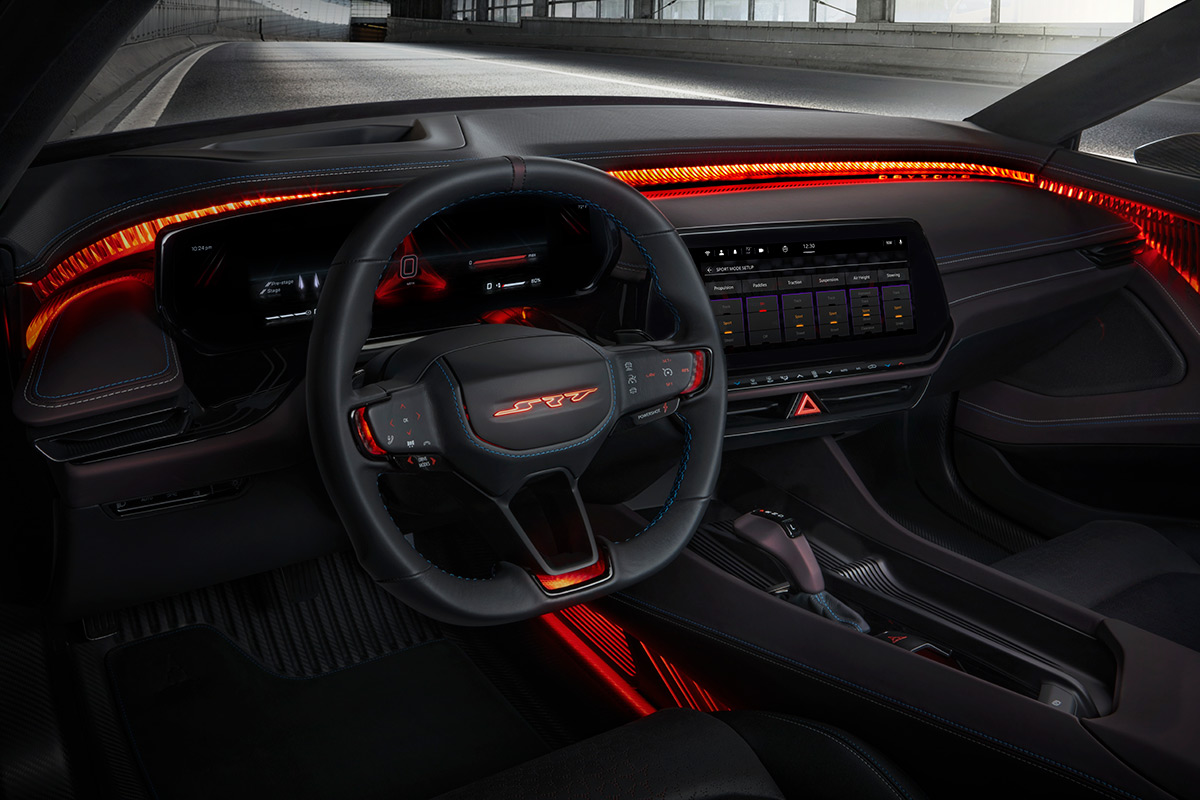 The 12.3-inch center screen, the largest featured in a Dodge vehicle, angles nearly ten degrees towards the driver, and the 16-inch instrument cluster is curved, creating a cocooned, driver-focused feel. An 8-by-3-inch Head-up Display (HUD) puts additional vehicle information where the driver needs it. The slim, instrument panel (IP) and mid-bolster in Ultraviolet color with blue and silver accent stitching feature a “waterline” that extends cross car. The upper IP is a step higher, an elevation change that creates a sculptural surface floating above the cluster. The Ultraviolet color also touches multiple interior surfaces, such as the console, doors and seats, creating a halo that works with the Attitude Adjustment Lighting™ to enhance shadows and highlights.

A parametric texture unites the interior and provides a connection to the exterior by continuing the inspiration of the 1968 Charger grille detail on the inside. The parametric pattern adds fluidity and sculpture, spanning from the IP to door appliques, beneath the console and continuing to the rear armrests and rear console. The dynamic interior texture has a three-dimensional quality that bounces light and is reactive to the environment, with lines that radiate as they move rearward. Ambient Attitude Adjustment Lighting illuminates the texture from below, playing with depth and dimension. 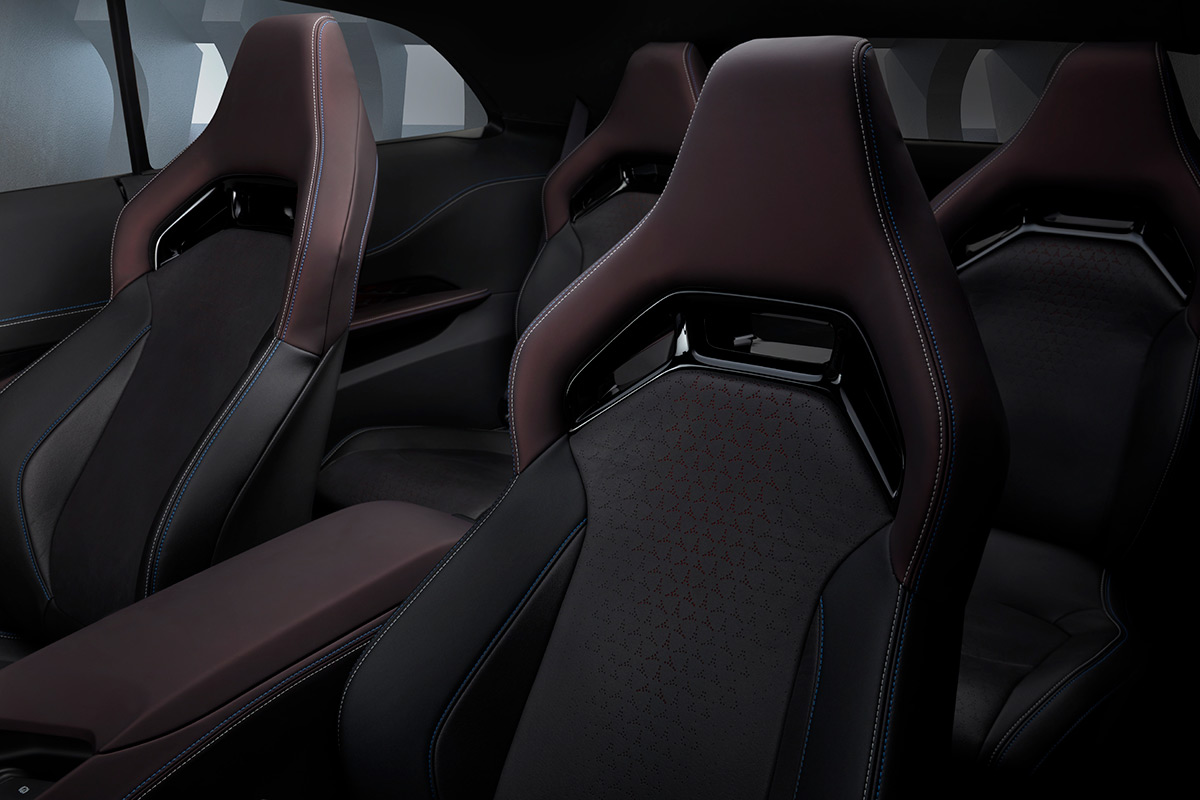 Circuit-like graphics originate on the carbon fiber floor and are strategically placed to surround occupants, flowing under the seats, moving to the center console and IP, and coming back to the driver, a subtle detail that acts as a circuit board, connecting one to another. A unique lightning bolt shape on the accelerator pedal hints at the concept’s electrified powertrain, as does the dual Blue Plasma and Silver stitching that surrounds the entire interior. Carbon fiber door sills feature illuminated white Daytona lettering, with lighted Daytona lettering also found at the top right of the mid-bezel.

Doors and center console follow the sculptural design theme, including only the needed elements. A pass-through area under the console creates a much lighter feel, and clever center console touches include a jet-fighter inspired cap that flips up when engaging the start button. The unique pistol-grip shifter is inspired by the past but with a modern execution, functioning as a mechanical precision piece that delivers an effortless shift experience when squeezing the pistol grip’s trigger. 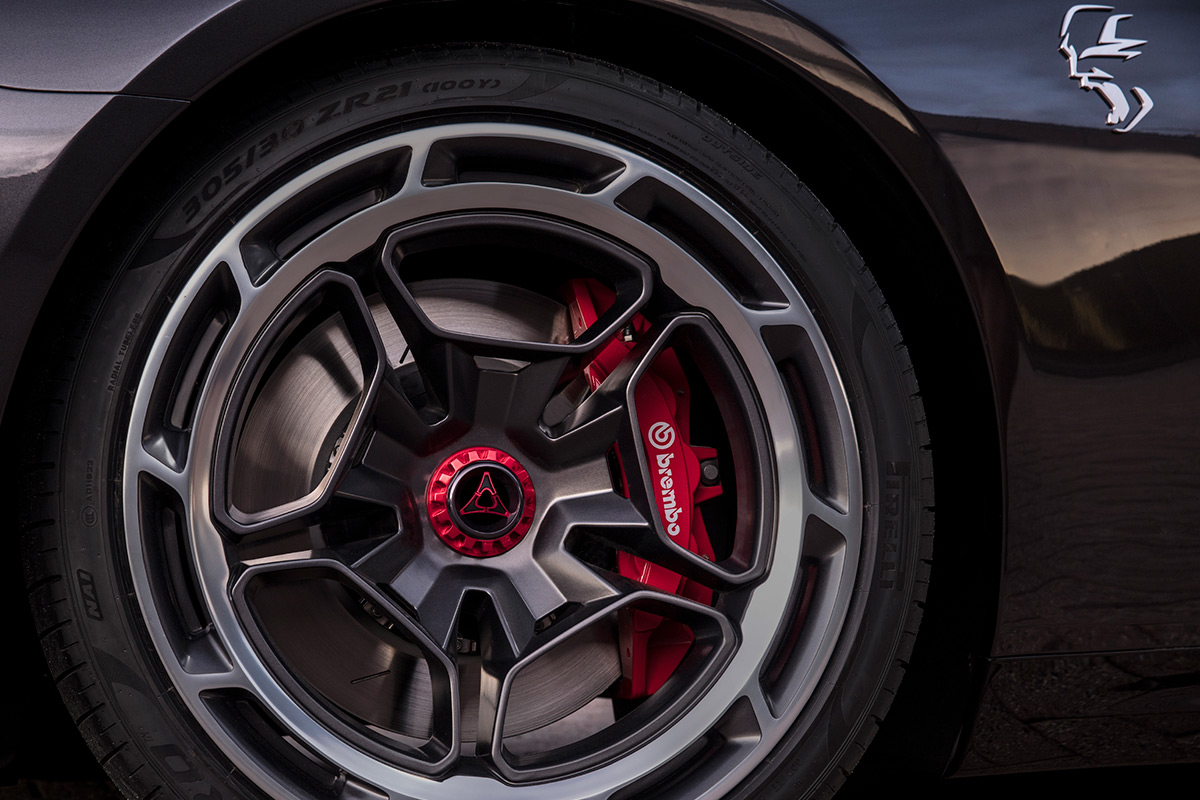 Dodge Charger Daytona SRT Concept seats are lightweight, race-inspired and slim in design, with an insert that features an abstract, perforated pattern of the Fratzog logo. The unique pattern fades out as it travels down the seat and reappears as it flows toward the center of the seatbacks. The upper seatbacks feature openings and seat bolsters that provide an airy, race-oriented feel, while holding occupants.

The panoramic glass roof gives an open-air feel to the Charger Daytona SRT Concept, helping to include rear passengers in the vehicle experience. The parametric interior texture extends to the headliner surrounding and accentuating the glass area. The carbon fiber “tub” floor and hatch are race-inspired lightweight features, and the large cargo area along with fold-flat rear seats provides more storage space than any previous Dodge muscle car. 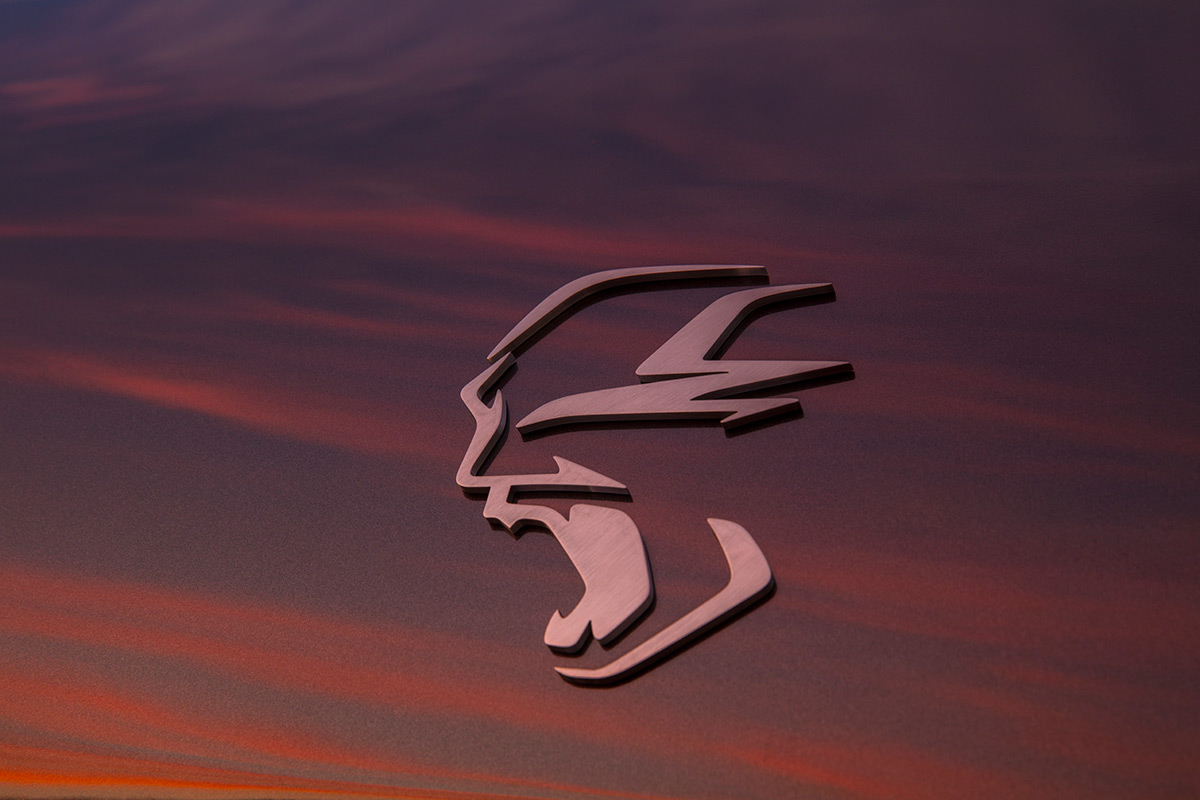 —
While Dodge is rather late to the EV game, the Dodge Charger Daytona SRT Concept proves that sometimes makes sense to sit back, see what others are doing, and then build something better. We think Dodge has a smash hit on their hands, and we’re excited to see what the brand’s electrified future looks like!