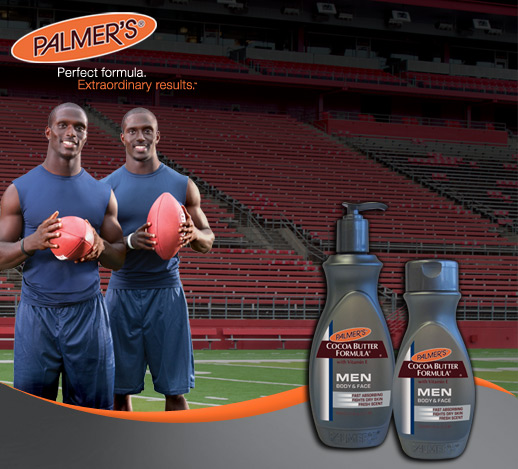 Last week, our friends from Palmer’s sent us their new Palmer’s Cocoa Butter Formula Lotion for Men. That’s right men, no longer do we need to sample products that our wives, girlfriends, or sisters use, us men now have a product to call our own. Palmer’s realizes that men have different skin care needs and concerns than women, and they’re placing men first with Palmer’s Cocoa Butter Formula Lotion for Men!

Even Devin McCourty of the New England Patriots and Jason McCourty of the Tennessee Titans are using Palmer’s lotion. And just encase you’re wondering, yes Devin and Jason are twins, and yes they are both NFL cornerbacks even though they play for different teams.

As the directions state, Apply to skin, daily, as needed – especially after shower. Well after several showers last week, I’m still impressed with Palmer’s! It comes in a masculine gray bottle, so there’s no need to feel embarrassed in the locker room anymore. It’s fast-absorbing, its scent isn’t overpowering, and it can be used on your face as well. Palmer’s Cocoa Butter Formula Lotion for Men contains pure cocoa butter, a skin protectant with superior soothing properties, and Vitamin E, an antioxidant that is said to promote the healing of skin blemishes such scars and rough, dry skin. I was really impressed with how Palmer’s had volume to it; it didn’t feel watered down such as other lotions, and a little bit of Palmer’s went a long way. I especially liked how my skin felt refreshed without that glossy shine that other lotions tend to leave on your skin. Overall Palmer’s Cocoa Butter Formula Lotion for Men is a product that I’m proud to add to my cabinet.

Palmer’s is giving one sample away to one of our lucky viewers. Leave a comment below, and next Sunday we’ll choose a winner to be selected at random. Comment away!