The Coca-Cola Carmike 2012 NASCAR program (running Aug. 1 – Sept. 30) offers fans the opportunity to purchase Coca-Cola Racing Family collectible cups exclusively at Carmike Cinemas, with a donation from Coca-Cola and Carmike going to the USO to help support our troops and their families.

Along with these collectible NASCAR cups, fans can also enter Coca-Cola’s Carmike 2012 Sweepstakes where one grand prize winner will win a trip for 2 to the 2013 DAYTONA 500! Make sure you visit a Carmike Cinemas before September 30th to enter the sweepstakes. Click here to view complete rules for the sweepstakes.

To help spread the word about this great cause, Coca-Cola has provided us with this great prize pack, which consists of 4 Collectible Cups, 2 Carmike Cinemas movie passes, a Coca-Cola cooler and t-shirt and a $50 AMEX gift card. 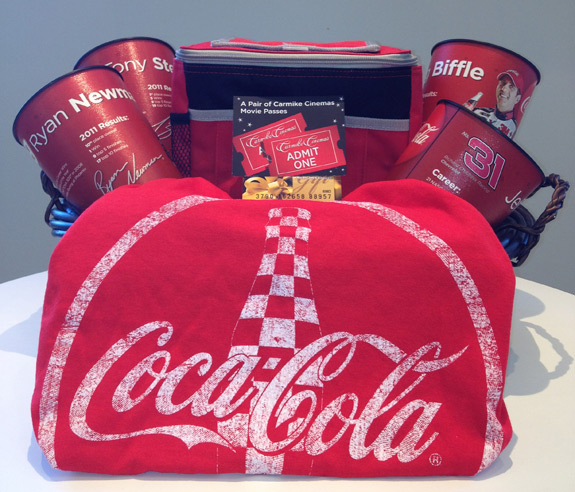 To enter, simply do the following:

We’ll pick a winner at random next Thursday. Good luck!

Disclosure: The prize was provided by Coca-Cola. Neither Coca-Cola nor its program partners (NASCAR + Carmike Cinemas) are sponsors, administrators, or involved in any other way with this giveaway. All opinions expressed in the post are my own and not those of The Coca-Cola Company or aforementioned partners. Winner to be chosen by Guys Gab.

The Beauty Inside – Your Chance To Star In A Movie!

Mike’s Hard Lemonade: Labor Day With Bear In A Bikini