Last week, we featured the trio of tuner challenge Scion TCs that are headed to SEMA. Turns out that’s not all Toyota’s got planned for us. They’ll also be showing off a slew of tricked out trucks at the show, a BMX-influenced Corolla, a rally-style Camry (yes, you read that right), and a buttload of Scion FR-S’s. 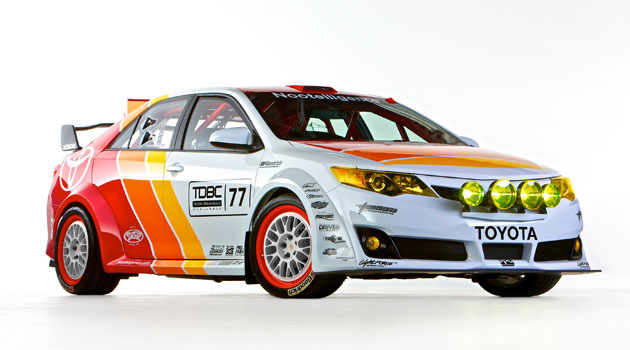 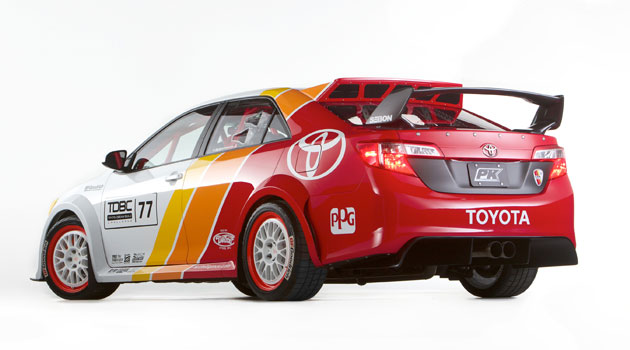 In my opinion, the 2013 Camry SE CamRally might be the most interesting car of the bunch, just because of how crazy it is. NASCAR driver Parker Kligerman and Kyle Busch Motorsports plunged into the rally racing world to transform the Camry into the “CamRally” for the Toyota Dream Build Challenge.

The exterior of the Camry turns heads with the vintage Toyota Racing color combination of red, orange and yellow. The rest of the modifications create a real, road-ready rally car. Racing seats, turbos, racing windows, a roll cage, powerful brakes and heat protection add functionality and safety to the car for rough terrain. Fog lights and an aerodynamic package enhance the ability of the car when it hits the road. There’s also a special CamRally logo with Kligerman’s racing number 77. 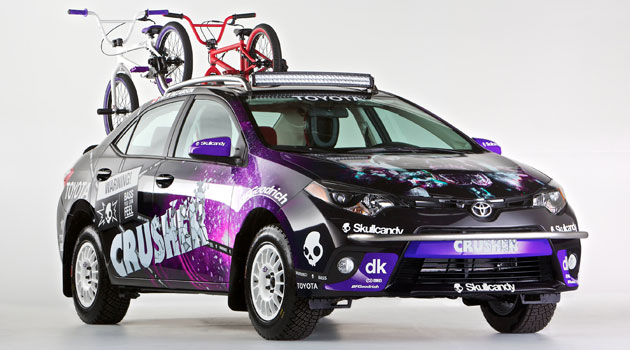 Next up is the Crusher Corolla, another car from the Toyota Dream Build Challenge. BMX rider and Team Toyota athlete Drew Bezanson joined Toyota and Skullcandy to design a car that infused BMX riding into the Corolla’s design. They accomplished this by adding custom grind rails added to the front and rear of the vehicle, rally wheels and a rack that mounts two bikes along the vehicle’s back window. When the bikes are removed and the trunk opened, there are nesting locations for bike tools, plus a pair of mountable speakers with light bars. 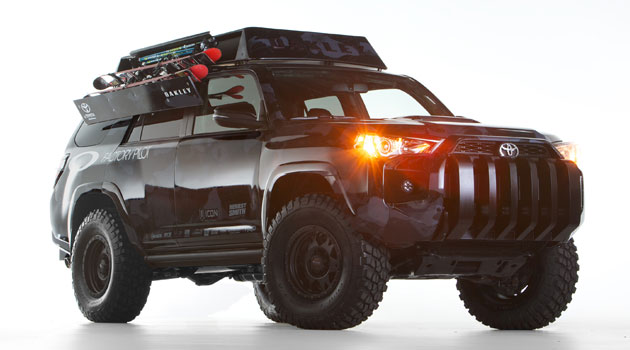 Skiers should check out the Ultimate Dream Ski 4Runner, which was dreamed up by athlete Simon Dumont and Oakley, again for the Toyota Dream Build Challenge. They wanted a 4Runner as aggressive as freestyle skiing, yet with the comforts appreciated by an athlete at the end of a long day.

They created an aggressive look through oversized front grill work, a dark Oakley camouflage-patterned vehicle wrap, LED lights and a rugged, metal roof rack designed to electronically lower and open to store two sets of skis. Comfort is in all the details. The doors, music, windows and other interior features are controlled by three separate iPads for a high-end, customized experience. After a cold ski run, there is a coffeemaker, a dryer for each glove and boot and a mountable grill stored in the rear cargo area. 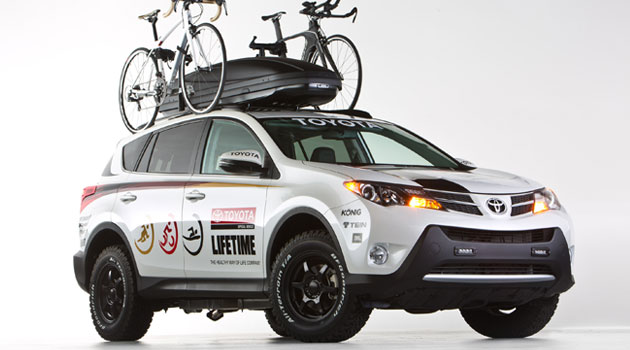 After the elation of a triathlon finish wears off, the wet gear and aching muscles remain. Climb into the LifeTime Fitness RAV4 and kick back. The fitness company teamed up with Team Toyota triathletes Sarah Haskins, Andy Potts and Hunter Kemper to build a 2013 RAV4 with perks that not only soothe tired athletes, but also provide training intelligence. Custom features include a hot water shower with a 5-gallon fresh water tank, a spin dryer and gear storage compartments in the rear cargo area. While the wetsuit drips into the drain, the athlete can enjoy a shiatsu massage in the front seat while reviewing race statistics and tracking data through the integrated iPad.

The relaxation doesn’t end with the massage. In the rear seat, a refrigerator holds water and recovery drinks near the Blendtec blender and cupboard full of snacks. A wireless Bluetooth speaker allows music to move with an athlete around the vehicle. And a custom roof rack keeps two bikes secure, yet easily accessible.

Other noteworthy Toyota vehicles on display at SEMA include the Snow-Ready DC Shoes Tacoma, the ‘Let’s Go Moto’ Tundra, and four custom FR-S vehicles and a unique xB.

Kudos to Toyota for shedding their conservative image and fully embracing the tuner market. We can’t wait to see what the rest of the aftermarket has in store for these cars!