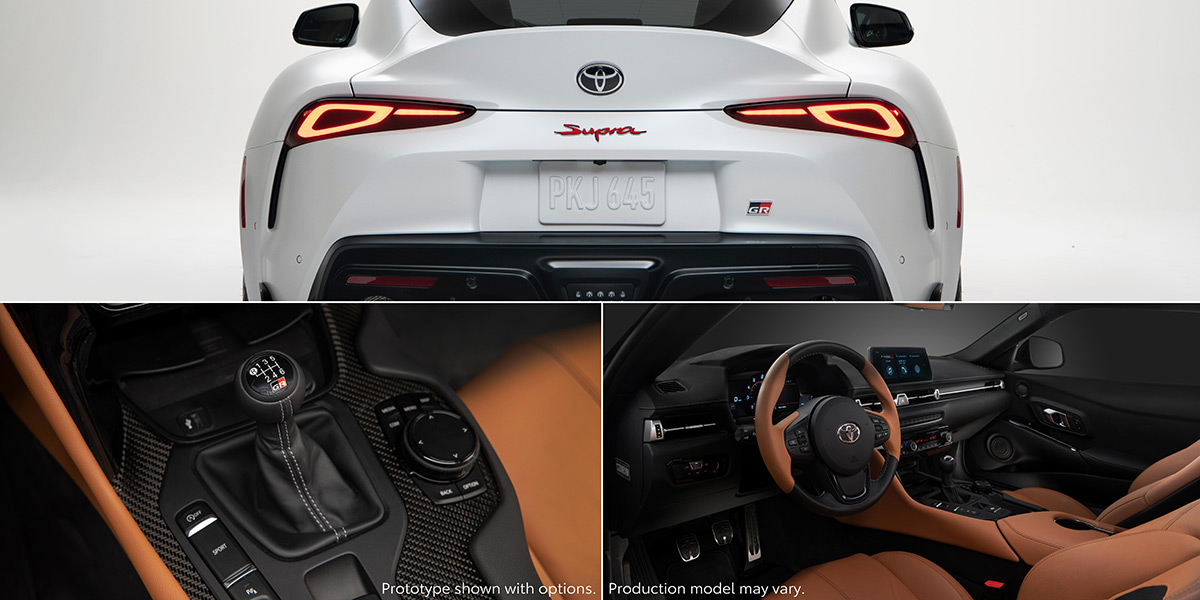 They say good things come to those who wait, and that’s most certainly been the case with the new Supra. Officially launched in 2020, Toyota gave the ’21 models a huge power bump, which understandably annoyed those early owners who “only” had 335HP on tap instead of 382HP.

For 2023, there’s been an even bigger development, one that enthusiasts have been clamoring for ever since the Supra was first released.. the availability of a six-speed manual transmission for those drivers who prefer to row their own gears. This is a sports car after all!

True to the GR Supra’s thoroughbred engineering quality, this development wasn’t simply a matter of using an off-the-shelf solution. Engineers developed a manual tranny specifically for GR Supra, with components designed specifically to suit the power and torque characteristics of its 3.0-litre 382 horsepower engine. At the same time, the GR Supra’s braking control systems and suspension have been retuned for even better performance – changes that are being introduced throughout the model range.

The engineering team modified an existing transmission housing, driveshaft and gear set and removed elements that were not required, such as the acoustic package, which reduced weight. At the heart of the transmission is a newly engineered large diameter clutch with a reinforced diaphragm spring. With a larger friction area and a stronger spring, this new component has the high-performance capability appropriate for use with the GR Supra’s high-torque engine.

The new 6-speed manual gearbox also features an intelligent Manual Transmission (iMT) programmed with new software that prioritizes sporty performance. When upshifting, the parameters are tuned to optimize engine torque at the moment of clutch engagement and release; on downshifts, the software has been fine-tuned for consistent performance. The iMT is set as the default but, if the driver prefers, it can be switched off in Sport mode.

To avoid a sluggish take-off and a low in-gear acceleration feel, the final drive ratio has been shortened, from 3.15 (in the GR Supra automatic) to 3.46 (in the GR Supra MT). The result is response and gearing appropriate for sports car performance. In addition, the GR Supra’s traction and braking have been optimized for operation with a manual transmission.

Close attention was also paid to how a manual shifter could be accommodated in the driver’s cockpit. The lever ratio was specifically set to minimize the effort required to make shifts and engage reverse gear. While the weight and shape of the 200g gear knob, along with the quality of shift engagement, have all been precisely defined. Ergonomics were also top-of-mind, as the console unit and position of the drive mode selector were adjusted to provide a 1.7-inch clearance between the shift knob and the control panel.

Rumor has it that the automatic is slightly faster than the manual (0-60 in 4.3 seconds vs. 4.6 seconds), likely due to the 1-2 shift. But still, most enthusiasts I know would gladly give up a few tenths for the extra control and engagement that it delivers.

The manual transmission will be available as an option on the Supra 3.0 and 3.0 Premium and a limited A91-MT Edition model will also be produced for model year 2023 only.

The 2022 Jaguar I-PACE Is Damn Near The Perfect EV, Except For One Major Issue!