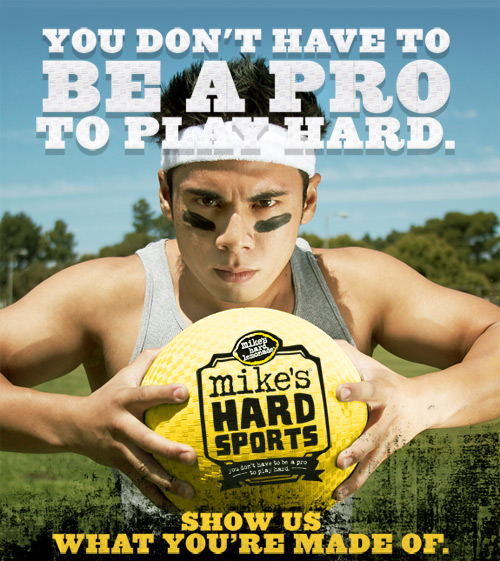 Mike’s Hard Lemonade recently launched Mike’s HARD SPORTS, a campaign that challenges “hard” athletes and teams around the country to show their stuff and demonstrate their unrivaled passion for their sport this summer. The video contest salutes athletes and teams who stand out from the crowd with the chance to win a Grand Prize of $10,000 and a starring role in an upcoming Mike’s ad.

From June 28 through August 16, 2011, teams and individual athletes can submit a short video (two minutes or less) to the Mike’s Hard Lemonade Facebook page, demonstrating their love of their sport and how they stand out from the crowd. From August 17 through August 30, 2011, athletes, friends and fans alike can vote daily for their favorite videos, narrowing the entries down to 20 finalists. A panel of Mike’s judges will then choose the top three winners, crowning the Grand Prize champion with $10,000 and their winning footage featured in future Mike’s Hard Lemonade advertising. The First and Second Prize winners will also win the opportunity to be included in future Mike’s ads, and will receive $5,000 and $2,500, respectively. Limited edition Mike’s branded sports gear will be rewarded to the top 20 finalists.

All athletes are encouraged to enter the Mike’s HARD SPORTS video contest to highlight their sport, be it kickball, dodgeball, cornhole, or Ultimate Frisbee, just to name a few. Video submissions should be funny, exciting, memorable and above all, unique. All contest entrants must be 21 years of age or older.

For more information or to enter the Mike’s HARD SPORTS contest, please visit the “HARD SPORTS” tab on www.facebook.com/mikeshardlemonade.

Wouldn’t it be great if a Guys Gab reader won the contest? What are you waiting for, grab your cameras and get cracking – They’re only accepting video submissions until August 16th!

Related Topics:mike’s HARD SPORTS
Up Next

Now You Have The Freedom To MountMe (Contest)