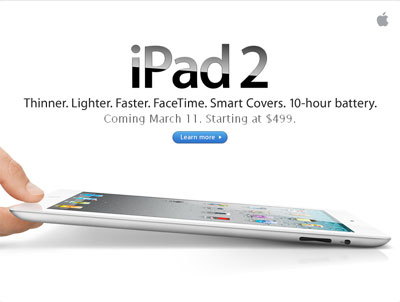 I’ve been a bit of an iPad hold-out. Now don’t get me wrong, I’m not an irrational Apple hater or anything. (I’ve actually had an iPhone for 3+ years now, and it does everything I could want and more) But to me, the concept of a tablet just seems too limiting. But I’ve recently had some time to use the iPad while traveling, and I’m starting to see the appeal of it. It won’t replace my laptop, but it’s good for a quick trip.

I knew that the iPad 2 was right around the corner, so I decided to wait and see what new features would be introduced before picking one up. (I’ve been burned by Apple before, like when I bought the iPhone 2G only a few months before the 3G came out!)

The guys over at Engadget put together this nifty chart that shows the complete breakdown between the two iPads.

Overall, it’s a nice upgrade, but many people (myself included) were expecting more from Apple. The tablet market is starting to ramp up, and Apple needed a game changer to stay ahead of the crowd. Hopefully the iPad 3 will be the answer. 😀

Playboy is Making 57 Years of Content Available to iPad Users!