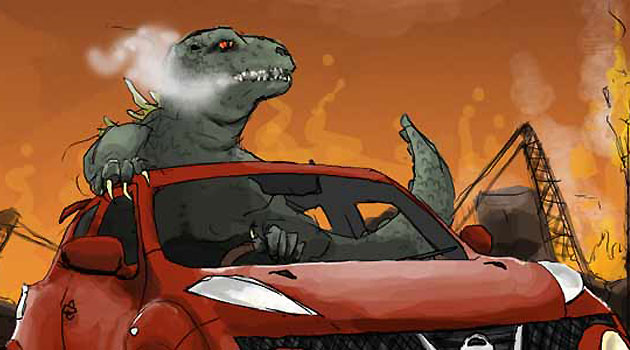 Monster movies are a staple of modern pop culture. Godzilla stomping around 1950’s Tokyo; Frankenstein just looking for acceptance in a cruel, harsh world; Darth Vader embracing the Dark Side of the Force (because red light sabers are much more awesome). We keep coming back to these fictional beasts for our entertainment fix.

In a great new article from Creditplus, some of the biggest (literally) and best movie monsters are paired off with some of the most beastly, terrifying and ugly specimens from the world of automobiles to create some great mash-ups sure to go bump in the night.

Those of you who have watched the fantastic Breaking Bad will be aware of the incomparable Pontiac Aztek driven by Walter White during the first few seasons – regularly hailed as the ugliest car of all time and a horrible example of design-by-committee. Though Walt becomes a terrifying monster throughout the show, there’s one famous beast even more suited to this American crossover – Frankenstein’s Monster. When Victor Frankenstein created life, he wished for beauty, but made a beast. Revolted by the monster’s vile visage, he cast it out into the world. This we already know – but the writers at Creditplus tell a different story from here. The monster finds solace in a lonely barn away from civilization, where he finds a car covered by cloth – itself abandoned by society. Removing the blanket, he finds the only object more grotesque than himself – the Pontiac Aztek. Godzilla might be a kaiju capable of leveling entire cities in one night, but even the king of all monsters will want to kick back in a sweet ride every now and then, but what would he drive? Something Japanese, something insane and something a little ugly. Step in, Nissan Juke R. The crossover-meets-supercar devised by a small team at Nissan would surely be the machine for the big lizard who has it all.

With 3 more monsters joined by some great illustrations to tie it all together, the article is a great read and can be found on the company’s blog. Take a look, and try and think of your own monster/car pairings!

Scion Unveils Trio Of Tuner Challenge tCs Ahead Of SEMA