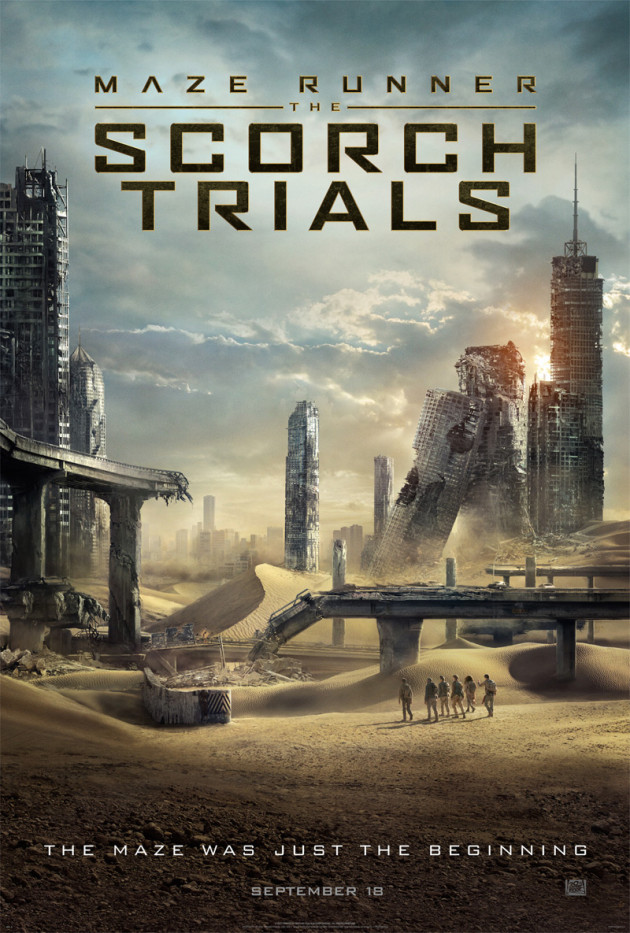 In Maze Runner: The Scorch Trials, it seems that the real runners here were director Wes Ball and crew. In a month, the queen bee of all young adult franchises The Hunger Games comes to an end. As such, we find all of its sibling franchises sprinting to do the same. Case in point, we have a second Maze Runner movie almost exactly one year after the debut of the surprisingly strong first one. Even with a talented team behind it, it’s almost always a mistake to rush a film to the finish line as hastily as this one. Assuming the existing source material does half the story crafting work for the filmmakers, ideally there would still be extra time to ensure that this is as tight and focused a story as the original. With that said, this is a series about running after all, so perhaps our creative forces are used to working under pressure.

The Scorch Trials picks up almost immediately after the end of the first film. Having just escaped the maze, Thomas (Dylan O’Brien) and his company of Gladers find themselves taken in by a mysterious faction that claims to be on their side. It seems a little too easy to trust the leader of this group, Janson (Aidan Gillen), who provides them with shelter and the first full meal some of these guys have had in years. Unfortunately, that suspicion is well founded when Thomas discovers that Janson is an agent of WCKD (the cooperation that created the maze) who performs deadly experiments on his refugees. Thomas and the group escape, and decide to take their chances out in “the scorch”, a dense desert filled with zombie-like creatures called “Cranks” who spread their disease by contact.

The most shining element of the first film was it’s claustrophobic and dynamic setting and electric pacing. The maze focused our characters around solving a puzzle, and we bonded with them over the sheer grander of their predicament. This time around, the story that has a lot more world building and question answering to do. The movement of the film suffers a great deal as a result, as we now have to spend a great deal more time stopping to explain the latest thing our young travelers have come across. The film eventually settles into a fairly predicable rhythm of action sequence, followed by long break, and that ultimately wears a bit thin as the film soars over the two hour mark.

Now that our characters find themselves in a more expansive trap, they start buckling under the lack of focus. Although this film is a solid twenty minutes longer than the first, a great deal of that extra time has been given to exposition as opposed to development. As such, we have a group of young actors without a whole lot to do besides run, look scared, and ask questions. It would help if there was a little more camaraderie between them, but the movie is ultimately a bit too grim for all that. O’Brien’s Thomas in particular takes a massive hit here, becoming more of a blank eyed cypher for the audience than the tenacious problem solver we met last time. However, there is a pretty colorful cast of supporting characters to balance things out. Gillen applies his naturally smug charm to a slightly underwritten villain role, but the real standout here is Giancarlo Esposito. His Jorge is essentially a more moralistic and unhinged version of Gus Fring, and is by far the most charismatic and fully realized character in the film. It’s a shame that all the characters aren’t granted the same amount of humor and heart that he is.

The greatest victory of The Scorch Trails is the absolutely spot on action direction by Wes Ball. This is a guy whose skills behind the camera suggest that he’s far above the material he’s been given here. The constant chase sequences here are absolutely thrilling, with Ball having the perfect sense of when the stakes need to be escalated. In sequences with a great deal of hectic motion, he moves his camera, but he lets us see everything when there’s some more extravagant platforming going on. Beyond that, the violence here is as brutal as a young adult story can be, giving every death a sense of consequence. While the story does have many sci-fi elements, the world feels tangible because of these sequences, along with the fantastic production design that blends practical and digital effects perfectly.

The Scorch Trials is essentially the middle part of a chess game. All the pieces are being moved into place for the climax, but nothing particularly crafty is happening yet. While it certainly manages to be entertaining through it’s near immaculate action and solid supporting cast, it feels weighed down by a rush to get to the next film. Here’s hoping that ‘The Death Cure’ provides a worthy payoff to a series with plenty of potential to escape the maze of adaption successfully, but seems to be getting a little lost along the way.

Related Topics:Maze Runner: The Scorch Trials
Up Next