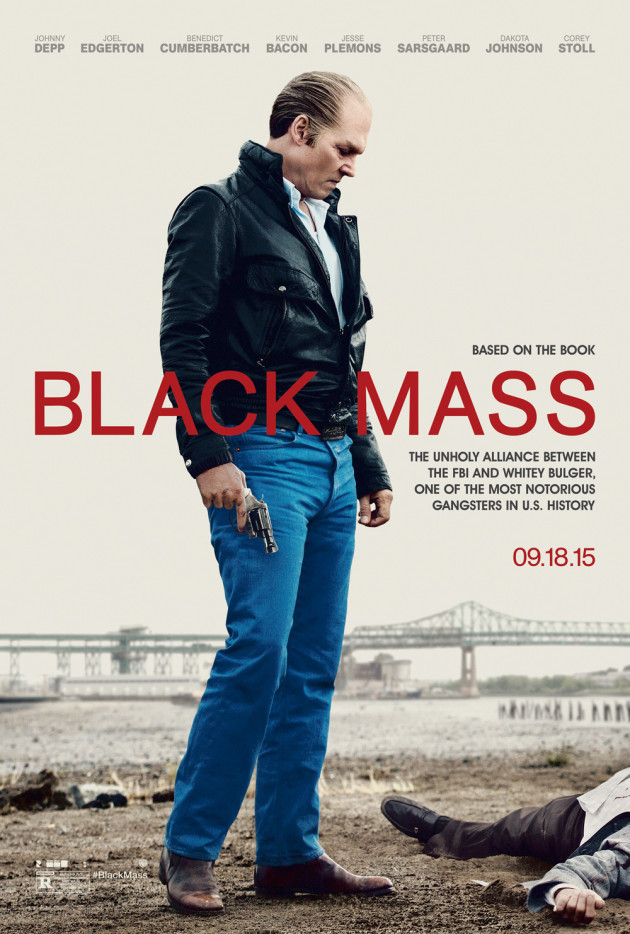 As soon as Scott Cooper’s gangster saga Black Mass begins, something feels a little off. It is not quite so easy to detect exactly what the misstep is right off the bat, as all the pieces for a great film seem to be in place. We’ve got a scenery chewing Johnny Depp, an all-star supporting cast, and a gritty Boston set 70s aesthetic that blends perfectly with the ever popular gangster genre. Even so, one can practically see Cooper’s little baby arms trying to fit into the suit sleeves of Uncle Scorsese and Grandpa Coppola. It wants desperately to be as delectable as the classics of the idolized crime genre as it waits for us to become consumed by it’s group of tough guy anti-heros and conflicted so called good guys. Unfortunately, it’s two hour quest to make an impression ultimately fizzles. It comes off more as a small scale drive-by than the opera of crime and death that it so desperately wants to be.

We begin in the early eighties inside an FBI interrogation room, with Boston criminal Kevin Weeks (Jesse Plemons) seemingly eager to give up information on the activities of his boss, James ‘Whitey’ Bulger (Johnny Depp). Over the course of the past decade, Bulger has terrorized South Boston with almost no consequence, despite performing most of his crimes right out in the open. You see, Bulger isn’t just a kingpin, but a connected kingpin. His younger brother Billy (Benedict Cumberbatch) is a state senator, and lifelong friend turned FBI agent John Connolly (Joel Edgerton) has made a deal with the criminal that promises him immunity as long as he agrees to inform against the rival mobs in Boston who are arguably even more dangerous.

In it’s marketing, Black Mass has made one definitive promise. This is the comeback of the wavering Johnny Depp. After a series of borderline humiliating roles in films such as The Lone Ranger and Mordecai, Depp depends completely into Bulger’s pulsating darkness and violence. He is almost snakelike with both his body and tongue, with every look and word cascading menace. However, it does still feel like Depp cannot escape his more eccentric tendencies. His insistence on once again caking himself in mounds of make-up does throw the realism of his performance a bit out of proportion at times, making him seem more like a cartoon villain than a genuine man who lived and breathed in real life. Even so, it’s by far some of his best work in years. It’s just a shame that the rest of the film does not even come close to meeting his efforts.

Ultimately, it’s the subpar screenplay that fails Black Mass. There is simply nothing that makes it unique from every other rise/fall gangster movie out there. It’s as if the troupes are being relentlessly shot out of a tommy gun. Sometimes this can be saved by crackling dialogue, but no such luck here. So much of the film is simply spent directly explaining exactly what deals and deaths need to be gotten to next, that we never really get to know these people as anything beyond props in the plot. Sure we get a few scary villain monologues from Bulger that slightly rise above the rest, but even those just feel like audition sides. Even through Bulger is on screen for the majority of the movie, we really learn nothing about him beyond his basic demeanor, leaving it entirely on Depp’s persona to carry the dramatic heft.

Meanwhile, there’s an eclectic group of A-Listers struggling with this shoddy material. Edgerton, coming off perhaps the best performance of his career in The Gift, gives us perhaps his weakest turn yet as the criminally underwritten Connolly. Despite the fact that this character is on screen nearly as much as Depp, he never escapes being a thin stereotype. Essentially, he’s only there to drive home the exposition, and to give about seven thousand long winded speeches about how he and Bulger grew up together. Cumberbatch does what he can with a fairly minimal role, but his hysterically bad Boston accent ultimately detracts from any notion of taking him seriously. The relationship between criminal and senator brothers could have been fascinating, but the film spends so little time on it that the audience may wind up forgetting the relation entirely. The parade of tinier roles fare a little better, with Kevin Bacon, Dakota Johnson, and Corey Stoll in particular shining in their limited screen-time.

Black Mass’ mediocrity certainly isn’t the product of a lack of effort. Depp very clearly is giving this everything he has, and Scott Cooper does occasionally show a flourish of the film the was ultimately going for. However, the narrative is weighed down by far too much plodding exposition and style-less action which ultimately make sitting through it a bit of a chore. Perhaps with a bit more humanity and heart, Black Mass could have joined the ranks of some of the great gangster films. As it stands, it feels more like an elaborate celebrity costume party that is only really a good time for those invited.

Related Topics:Black MassJohnny Depp
Up Next

Check Out The Epic Teaser Trailer For Divergent: Allegiant