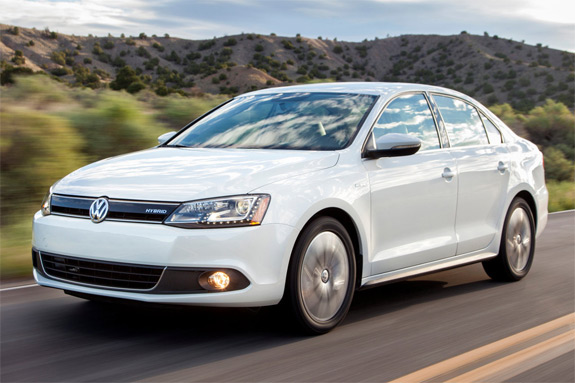 Where the TDI offerings in the Jetta, Passat and others are an excellent choice for those who do a lot of highway driving, the new hybrid option showcased in the 2013 Jetta Hybrid is perfect for the commuter who still wants that beautiful German feel on the road.

Normally, when we think Volkswagen efficiency, we think diesel. Few vehicles are better than the TDI offerings from VW and sister company Audi. They’re among the most beautiful meldings of German road engineering with high efficiency. Given the chance to try the new VW Jetta Hybrid, we weren’t sure what to expect. But once in the car, we found that it’s all German drive all the time.

It’s fitting that Volkswagen begins its serious hybrid offerings in this car, since the Jetta is the company’s best-selling small sedan. Whatever rendition of the Jetta you choose – diesel, gasoline, or this hybrid – you’ll find it to be a great drive. This sixth-generation of the car sees some improvements to appeal to today’s more demanding and connected driver.

Inside The 2013 Jetta Hybrid
The interior of the Jetta is roomy, though more cramped than the new Ford C-Max it competes with. It is better than the rest, however, being much more comfortable than the smaller hybrids (and sedans) in this class such as the Honda Civic and the Toyota Prius.

The Jetta seats five, four of which will be comfortable with the center rear seat being the usual in this group of cars: barely fit for the kids, let alone adults. Still, there is plenty of room and the trunk sports ample space.

The interior fittings are good and nicely done, though not anything we’d call “luxurious.” For the people who purchase this type of car, though, it’s mostly about the seats and the stereo anyway. The buckets are what you’d expect from VW: comfortable, but not cushy. In the higher-end accoutrement, they become much more comfortable thanks to the added lumbar and other controls.

The infotainment center in the console is one of the highlights of the Jetta Hybrid’s interior. It not only allows control of the display – including the addition of driving efficiency data – but is also relatively well-connected with smart phones, even in its base option. At the high end, the Fender Audio system is hard to beat and is one of the best-sounding systems on the market.

Under The Jetta’s Hood
The 2013 Volkswagen Jetta Hybrid has a small 1.4-liter, four-cylinder TSI gasoline engine at its base with an added 27 horsepower electric motor for the hybrid addition. The 1.4L is the latest in VW’s EA211 small engine series, replacing the outgoing EA111 generation. It’s fully aluminum in construction, uses variable intake timing, and has a shorter stroke and wider bore to improve efficiency with higher torque outputs. If it were powering the car all by itself, this would be great, but adding on the electric motor in parallel to the engine.

The motor has its own electronic clutch which allows it to be disconnected from the drive train when it’s not in use or will just be a drag (such as at high speeds when the gasoline engine does all the work). This clutch also allows the opposite, for the engine to be disconnected to act only as a generator for battery power or to be shut off completely. This also allows the motor to act as a regenerative brake to restore power to the batteries during slowing or stopping without adding in engine drag.

The battery pack sits above the rear axle, adding weight in the rear to balance the forward weight of the engine. This 60-cell, 220 Volt pack is rated at 1.1 kilowatt hours giving the car about two miles of all-electric range at city speeds (sub 35 mph).

Driving The VW Jetta Hybrid
While our time in the Jetta was short, it was breathtaking. True to the Volkswagen name, this hybrid is a joy to drive. It does 0-60 mph in about 8.6 seconds which may not be sports-car fast, but it’s faster than just about everything in this segment.

The balanced weight and legendary VW chassis (remember: these people also make Porsche) mean that the Jetta handles beautifully in every driving situation. Even better than that, the VW Jetta Hybrid gets 45 mpg all the time – city, highway, combined. Except when punching it to prove its speed capabilities, we easily achieved that throughout our short drive both on city streets, in traffic, and on the highway.

The only real downer to the VW Jetta Hybrid is its relatively boring style. It sits in a segment that isn’t generally well-known for great looks, though, and is better-looking than many offerings. If you’re in need of high efficiency in a small family commuter car and don’t want to sacrifice the fun of driving to get it, the Jetta Hybrid is a great option.

Official Launch Video For The LaFerrari