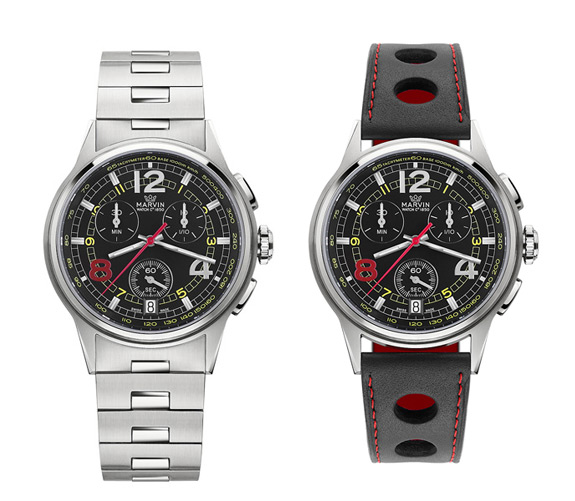 I’ve been a fan of Marvin watches for quite some time now. They have an unbelievable collection of watches, but right now my favorite watch is the Marvin M007. (Though their M120 has that understated sexy thing going for it)

This 41mm quartz chronograph model is all about auto racing as black, white, red and yellow colors adorn the technical dial. The leather strap option has aeration holes. It is the only model with visible red stitching from the outside. The chronograph is seconded by a tachymeter computer yielding vehicle speed based on known distance.

In this model, an oversized 8 o’clock and the seconds hand are color matched in Marvin red. Leather ($910) and stainless steel ($1080) bracelet versions are available. In each case, the dial is black with Superluminova C1 numbering.

Now unless you’re a watch nerd like me, Marvin’s probably not a a brand you’re familiar with. But they’ve been making watches since 1850! Here’s a quick history lesson for you:

In 1850, the brothers Marc and Emmanuel Didisheim created a watch company in St-Imier in the Bernese Jura. Thanks to the quality of its products and the dynamic nature of its distribution, the company experienced rapid growth.

At the beginning of the 20th century, the brand adopted the name “Marvin” after one of its American partners – a pocketwatch enthusiast. It took as its symbol a three-pointed crown, representing an inverted letter ‘M‘ and the ‘W‘ for watch.

After conquering America, Marvin emerged as a point of reference among Swiss brands in more than 70 countries. Over time, it has produced millions of watches including models that have become genuine collector’s items.

Marvin builds its success on the aesthetics of its products – A style both simple and refined, always ahead of emerging trends. This creativity, combined with the quality of its products, has earned the brand popular support from numerous celebrities, including motor-racing drivers Ascari, Stirling Moss and the renowned Fangio, Che and Marylin Monroe.

Related Topics:Marvin DN8 M007
Up Next