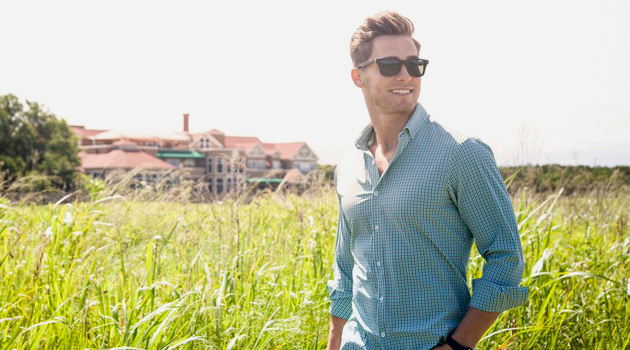 In SoCal, fashion isn’t dependent on the weather. But, it’s not entirely influenced by a surfboard, either. Believe it or not, (looking at you, Midwest) menswear isn’t all board shorts and sleeveless tops. It’s not all corduroy pants and cable knit sweaters, either. It’s something more eclectic than that, and there’s a lot of different styles because a lot of different men live in Southern California, and have to get dressed every day.

The following is a breakdown of some common menswear categories, and how the Golden Coast is keeping these traditional styles fresh.

There’s plenty of businesses being run in SoCal, and they’re not all relative to the movies. There are lawyers, real estate agents, and tax professionals – just like the rest of the world. And, no, these gents aren’t going to show up to the office in a wet suit.

During the dog days of summer, it’s somewhat impossible to comfortably wear a sports coat. Instead, professional men pair linen button­up shirts with ties and bow ties. You can keep a simple button­up professional by pairing it with an expensive watch, and a pair of tailored slacks. Everyday Oxford shirts remain popular with professionals because they’re lightweight and versatile.

The casual office dress code is simple – dress comfortably, but don’t come to work in jeans and sneakers. It’s more laid­back than tailored office wear, but more refined than jean shorts and old band t­shirts. The preppy style from Johnnie­O.com perfectly represents SoCal’s casual office attire, as the site is full of relaxed, but sophisticated prep­wear. 4­button men’s polo’s are perfect for a day at the desk, as are a pair of relaxed­fit khakis.

Sportswear is the style SoCal is best known for. It includes: board shorts, wetsuits, and tank tops. Other styles include: bomber jackets, letterman jackets, and performance wear. Basically, SoCal sportswear should combine performance features with versatile fabrics for a look that screams, “I work out,” or “I surf.” People assume Southern Californians dress like this every day, but in truth sportswear has its place: on the beach or at the gym.

There’s no definitive casual style in California. Everyone is different, you know? Do all the people dress alike where you’re from? Probably not. That being said, there are some definitive styles in terms of casual wear. Some men love the casual prep look; it’s basically the same as casual office, but on the street and away from the office. Some men are a bit laid back, and prefer jeans and t­shirts. You’re almost guaranteed to see an eclectic array of men’s fashions when hitting the streets in SoCal. Here’s just a sampling of the styles you’ll find: creative/artsy, rebel, performer (sunglasses, scarves, hipster-looking, etc.), tastemaker, explorer, social advocate, intellectual, and spiritual.

Accessorizing is big in SoCal, but accessories go out of style fast. Hit the streets to see what guys are wearing, or subscribe to a men’s fashion magazine… if you’re finding it difficult to keep up. Currently, GQ lists panama hats and Hodinkee watches among the top trends. If you’re not big on shopping for accessories, simply get a few wardrobe staples: a good watch, a nice pair of shoes, and some decent ties and cufflinks.

Much like fashion, SoCal is all about tapping into your inner­self, and discovering what makes you tick. Around here, no two people are the same, and individualism is embraced. Next time someone tells you they know what SoCal fashion is all about, you’ll know the truth: They don’t. Because, no one can define something that’s so original in spirit.

Complete Your Fall Look With These Must-Have Accessories