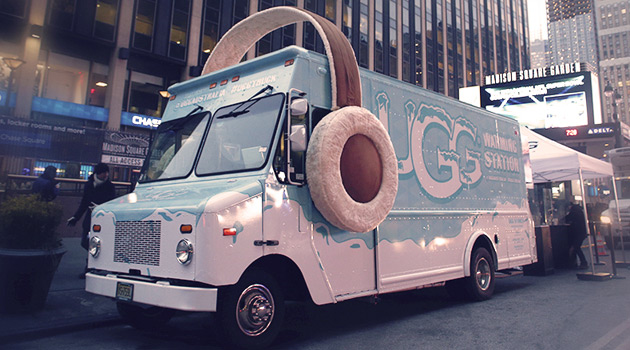 Dubbed the UGG Warming Truck, the igloo-themed truck will have a giant pair of UGG earmuffs attached to the top of the vehicle. UGG will be handing out free hot chocolate and also selling UGG Australia’s coveted cold weather accessories (hats, scarves, mittens, gloves) for men, women and kids to keep everyone warm during the lead up to the Big Game.

The UGG Warming Truck will be located in front of Penn Station (7th Avenue between West 30th and 32nd Streets) on Friday, January 31st from 8am to 5pm and Saturday, February 1st from 9am to 6pm. You won’t be able to miss it, as it’ll have a giant pair of UGG earmuffs fixed to the top of the truck.

There will also be some celebrities stopping by the UGG Warming Truck:

Along with the UGG Warming Truck, the four UGG Australia stores around New York City will run individual in-store contests for consumers to win a pair of tickets (2 tickets) to the Big Game on February 2nd!

Consumers can enter to win by visiting an UGG Australia store during business hours to fill out a contest entry (one entry per person, winner must be 18 or older, no purchase necessary) from January 23-31.

Four winners for the four pairs of tickets will be randomly selected from the valid entries and will be notified on Saturday, February 1st by 9am ET to claim their tickets. Click here to read the official rules.

Go For The Gold With These Olympic-Themed Cocktails