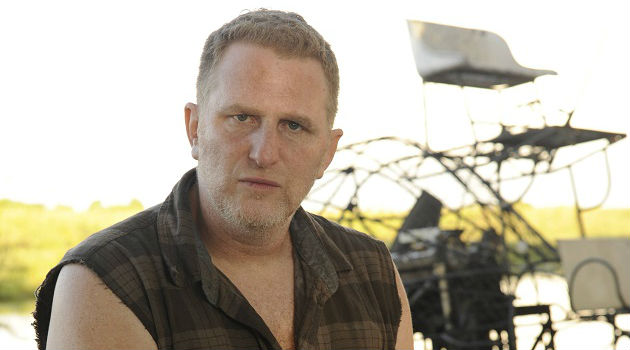 Michael Rapaport joined Justified’s 5th season as charismatic criminal Darryl Crowe Jr. I had the chance to talk with him about Justified, some of his favorite projects, and his love of reality television.

1) My question for you is I’ve been loving watching you on Justified this season, and I was wondering what has been your favorite part of playing Darryl and what has been the most challenging part?

My favorite part is just being able to say and do things that you can’t do in real life and behaving in a way that’s just not really acceptable in the real world. And then when I see the episodes, I get off on the little things, the little sort of things, the lines in between the lines of dialogue.

So that’s been my favorite part and just really being able to. “It’s like playing cowboys and Indians.” When you’re playing this bad of a character, it’s obviously not reality for someone who’s not living that life. So that’s been the most fun. The challenge has been just the intensity of the work schedule, the accent and my own personal standards.

2) I’m really enjoying Darryl, and I was wondering, we haven’t addressed this one specific thing and that is, as probably the most interesting villain since Mags Bennett back in Season 2, Darryl is a pretty strange cat. So I was wondering what did you find was the key that made him click for you, that made you say, “Oh yeah, I got this guy.”

3) Setting aside Justified, what would you say is your favorite project that you’ve worked on over the years that didn’t get the love that you thought it deserved?

That’s a good question. I would probably say I did a movie called Special that I wish had gotten better distribution. It’s an independent movie that I’m very proud of that people see on Netflix and iTunes and such.

I really did enjoy working on the TV show The War at Home. I thought that was a really good show, and I thought that we didn’t really get a fair shot at making a sort of traditional, family-style, raunchy television show. That was disappointing that it ended shortly.

There have been a bunch of them. I did a movie called Illtown that I think is pretty good. I don’t want to say the documentary Beats, Rhymes & Life, because that as much fanfare as you can get for a documentary, but I always like to bring that up.

Those things are probably the ones that stick out off the top of my head.

4) And as a follow-up, what’s next for you beyond Justified? I know 30-for-30 was mentioned. So that sounds pretty intriguing, as a sports fan myself.

We’re in the middle of finishing up the 30-for-30 right now, and I’m really excited about it. For better or for worse, it’s an exciting time to be a Knicks fan. So we’re deep, deep, deep in the throes of that right now.

Yes, but at least you guys had the 80s and you had Iverson in the 90s. So I don’t feel bad for you guys.

5) You mentioned earlier that you were a fan of Justified before coming into the show. Are there other shows that you’re a fan of that you would like to work on sometime in the future?

That’s a good question. Right now, let me see, well, I was obviously a big fan of Breaking Bad. Everybody was into that. I’ve been enjoying True Detective. To be honest with you, right now, I’m probably forgetting some stuff, but to be really honest with you the thing that I get the most joy out of on television, besides sports right now and since True Detective ended I’m really, and I wouldn’t say that I’m embarrassed about it because I’m actually a proud viewer, but I do watch a lot of reality television, for better or for worse, like a lot of Bravo television.

It’s shameful, but sometimes I watch those episodes of television and I’m like, “That was a really good hour of television.” I know, I know it doesn’t sound highbrow and geeky and all that. But all these television critics and stuff like that, you can sit down and watch a couple of hours of some good reality television and it’s as entertaining as anything that they have on cable, HBO, Showtime or anything. I promise you.

Justified airs Tuesday’s at 10:00 on FX. Check out this clip from next week’s episode.

Related Topics:JustifiedMichael Rapaport
Up Next

Enjoy These Royal Cocktails During The ‘Game of Thrones’ Season Premiere