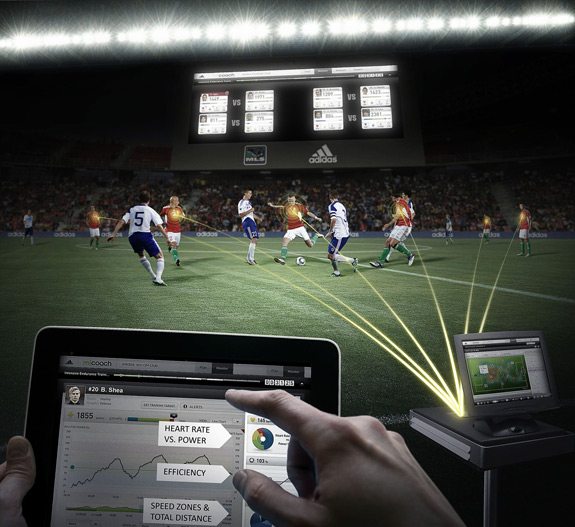 Today, adidas and Major League Soccer announced that the 2012 AT&T MLS All-Star Game on July 25th in Philadelphia will be the world’s first “smart soccer match” and will feature the new micoach professional soccer team tracking system, the next step in player performance analysis technology.

“adidas has always been known as a pioneer, an innovator and an industry-leader when it comes to the sport of soccer,” said MLS Commissioner Don Garber. “It is an honor that they have chosen to debut their new game-changing and revolutionary technology at this year’s AT&T MLS All-Star Game in Philadelphia. adidas has quickly become a leader in sports analytics and we believe our All-Star Game will serve as the perfect opportunity to introduce the new micoach professional soccer team tracking system.”

Tested and developed in collaboration with MLS and its clubs, multiple national teams, and clubs in Europe, the micoach professional soccer team tracking system is a step further into the future from the world’s leading soccer brand. This announcement follows the launch of the world’s first smart cleat – the adizero f50 micoach.

“Our leading innovations help athletes and coaches on the field of play and we are finding ways to use these innovations to create more immersive sporting environments and experiences that will revolutionize the way we view sports and engage and excite fans,” said Patrik Nilsson, president of adidas America. “The new micoach team tracking system combines state of the art technology with real time analysis bringing the game the most significant advancement in soccer coaching in the modern era. MLS understands digital innovation is the future of team sports and we are proud to make the MLS All-Star Game the world’s first smart competition with our new micoach team tracking platform.”

Following the debut of the micoach professional soccer team tracking system at the MLS All-Star Game, the new technology will be rolled out globally in the coming seasons.

Get The Chance To Design A Shoe For adidas!