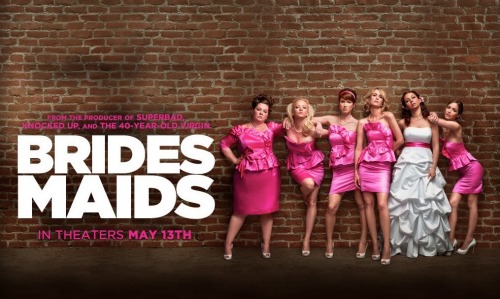 While the summer is chock full of action movies and super hero drama, there’s a flick for the ladies out there that most guys are going to get dragged to if your woman like comedy. That movie is Bridesmaids, the female version of “Wedding Crashers,” but maybe even more crude with a lot of bathroom drama thrown in.

The movie, starring a couple Saturday Night Live ladies – Kristen Wiig and Maya Rudolph, is rather predictable, but it does have a lot of crass humor in it that your lady will enjoy. As a guy, it’s kind of a “grin and bear” it flick, but it isn’t like being dragged to the opera or anything half as bad as that.

The movie goes as one would think. Annie (played by Wiig) is named as the Maid of Honor for her BFF Lillian’s (Rudolph) wedding. Over the next two hours Annie’s life goes from bad to worse, as she not only sucks as a Maid of Honor, but also ends up moving in with her mom, loses her job, and her love life is not exactly a thing of beauty, though you know in the end she’s gonna end up with this Irish cop she keeps running into.

The battle in the movie is between Annie and Lillian’s new pal – the ultra rich and snobby Helen, played by the rather hot Rose Byrne. You may remember her as the girlfriend of Russell Brand in the movie “Get Him to the Greek.” Her job of course all movie is to out spend Annie on everything, and try to win the role of Maid of Honor away from her, something she does very well despite having a fragile ego due to the fact she really has no friends.

Throughout the movie, the other bridesmaids are involved in the hijinks that ensue, with the best part being played by the plump Melissa McCarthy, who could be the new Chris Farley of females. She’s easily the best part and funniest in the movie, and there’s no doubt she’s going to get more roles due to this part. Almost half of the funny, memorable parts in the movie belong to her, and she pulls it off very well.

While the plot lacks a lot, the movie is funny, and your lady will likely come out of it with a smile. You probably don’t want to take your mom or grandma, as you’ll be blushing after the amount of sex scenes (one in the first two minutes of the movie) and jokes, as well as the gross bathroom humor that continues to rear its ugly head.

By the end, Annie comes out on top (you saw that coming three minutes into the movie), and the movie has a predictable happy ending for everyone. If your going to drag your woman to a number of action and super hero movies all summer, do yourself a favor and escort her on this trip to see “Bridesmaids.”

Trust me, there’s worse things she could drag you too.