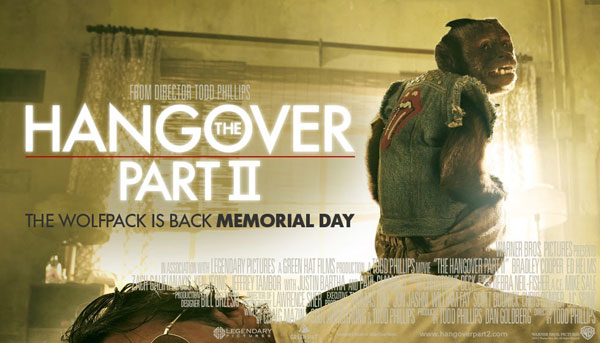 If it ain’t broke, don’t fix it. That’s what the people behind The Hangover decided to do with The Hangover, Part 2. They know there’s a reason the first film became the highest grossing R-rated comedy of all time. So they gave us more of the same… the Wolf Pack wakes up after a wild night that they can’t remember. Somehow, Stu has disfigured himself again. Somehow, there’s a random animal in their room. And somehow, another wedding is in jeopardy because of a disappearance and case of mistaken identity.

But the ante has definitely been raised the second time around. Bangkok looks much dirtier and more dangerous than Vegas did, and the type of debauchery that’s possible there.. let’s just say, this movie definitely earned its R rating. There’s one scene, in particular, that rides the line of disgusting. But I dare you to watch it without laughing out loud.

Is the second movie better than the first? That’s hard to say. Part of what made the original movie great was getting to know these characters and how they relate to each other. We already know them now, so we’re not surprised by Alan or the wildly inappropriate things that come out of his mouth. We’ve already seen all of Mr. Chow’s nakedness and craziness, so that’s not a shock either. This time we’re expecting the big laughs, and we get them. We’re expecting supremely quotable lines, and we get them.

Maybe it’s not a better ride.. but it’s definitely a fun and raunchy ride worth going along on!