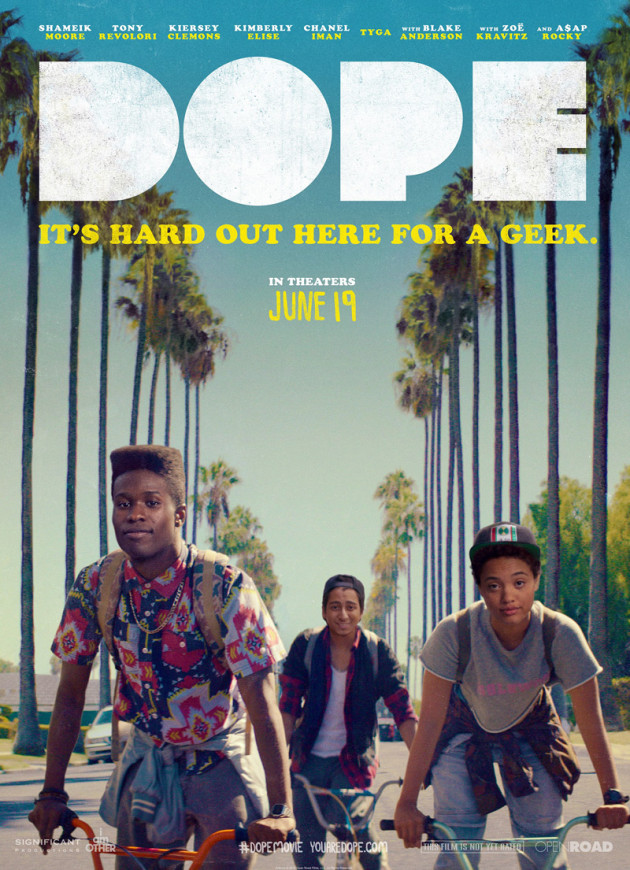 In every decade, there are certain movies that act as time capsules, reflecting exactly where society is in that day and age, warts and all. Later on, we look back on these films with the same admiration we had for them before but with a side of shame as we wonder just what the hell we were thinking.

Dope not only seems aware that it could very well be one of these movies in the future, but also seems intent on reflecting on exactly what it means to be nostalgic towards another time in the first place, and how new generations mold their identity more and more based on what the previous ones achieved. However, none of that would ultimately matter very much if Dope was not a good movie, and fortunately, it’s a pretty great one.

Malcolm (Shameik Moore) is a teenage boy who feels utterly out of place in the world he lives in. A geek obsessed with 90s rap culture living in a harsh Los Angeles town where he can’t even enter school without walking through a metal detector, Malcolm has his mind focused on the future, wanting more than anything to be a man of Harvard. That being said, he certainly isn’t getting out of here in the near future, so he along with his two buddies in punk rock Diggy (Kiersey Clemons) and Jib (Tony Revolori) pass the time goofing around, hopefully avoiding getting beat up. That is until Dom (ASAP Rocky), a local gangster, pulls the three of them into a party that results with Malcolm getting stuck with a backpack full of drugs that everybody seems to want, forcing our three heroes to grow a spine at long last to get themselves out of their predicament.

If there’s a name that needs to be learned by the end of this review, it’s that of writer/director Rick Famuyiwa. In both a comedic and dramatic vein, he proves himself a master storyteller with this film. From the very first frame, every little bit of motion is injected with kinetic energy. Taking a hint from such directors as Edgar Wright, and Phil Lord/Chris Miller, Famuyiwa masterfully incorporates visual and editing cues to sell jokes and scenarios. Everything is perfectly larger than life, making the story feel fable-like without ever going over the top. However, he also knows when to pull back a little and let a scene breathe, and in the film’s few dramatic moments, he lets what the characters have to say be the star, and man, do these characters have a lot to say.

Famuyiwa makes a point in ensuring that whether a character is one of the leads, or just an ancillary piece of the scene, they always have something funny or interesting to say. These people feel like they live in our world, constantly making cultural references to fuel their points, or occasionally going off on hilarious tangents even in moments of high tension. They hit a perfect balance between natural and heightened that is only aided further by wonderful performances by the entire cast. Shameik Moore in particular is a stand-out, never Malcolm into a stereotype of any form, melding a quiet charm with a confidence that makes us root for him. He also has fantastic chemistry with Clemons and Revolori, some of the movie’s strongest moments being when the three of them are firing off at each other. There are moments where certain characters feel a little too broad, bringing the comedy down a bit, but normally the film is on to something else by the time one would process that.

For all of it’s eccentricity, Dope does loose a bit of fuel as it goes on. There’s a shift in the narrative in the second half that starts to drain a bit of the comedic power that the first half has. It certainly still manages to have plenty of great moments, but all of a sudden, a story that felt like it was moving a million miles an hour starts to stall to about a hundred thousand. There are one or two scenes that are certainly well directed, but feel a bit out of place with what the rest of the film seems to do or say, and by the time we reach the home stretch, Famuyiwa misses a couple opportunities to walk off stage on a powerful note, instead opting for a more conventional ending that feels the need to tie up every loose end.

Perhaps the greatest achievement of Dope is that there is nothing quite like it. Rick Famuyiwa incorporates elements of broad, satirical comedy with that of the type of racially/culturally charged tale that normally finds itself with a place on Oscar night to create something completely original. It’s not a parody, simply a new perspective on these stories that we haven’t gotten yet, and considering how well the final product has come together, I cannot wait to see what Famuyiwa will take on next.