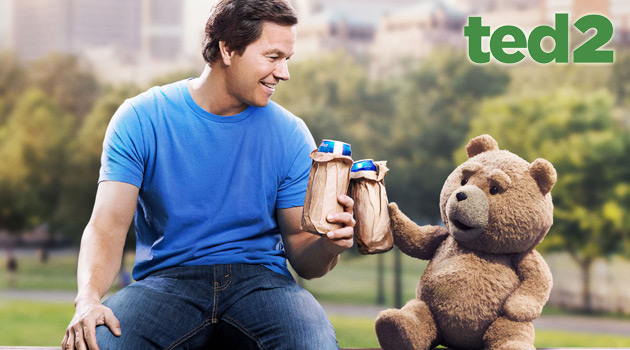 For a guy who previously built his empire on cartoons with fat men fighting chickens and sexually ambiguous aliens, Seth MacFarlane really could not have asked for a better live action debut than Ted. It was a perfect meshing of his absurd humor with a storyline that had some deeply relatable themes of arrested development and friendship, it was a hit with both critics and audiences alike. Then, like many artists who storm out of the gate swinging, he face-planted with the flat A Million Ways To Die in the West. Seemingly taking that failure in stride, MacFarlane has decided to go back to his tale of a slacker and his bear, for better or worse.

Ted 2 picks up several months after the original ended, with our titular stuffed bear (Seth MacFarlane) getting married to his girlfriend Tami-Lynn (Jessica Barth). While Ted is dancing his night away in a Vaudevillian state of bliss, his best friend John (Mark Wahlberg) is lamenting his divorce from Mila Kunis’ Lori six months prior. However, John finds himself having to put all that aside when Ted and Tami-Lynn find themselves unable to adopt a child, as Ted is not recognized by the state as a human being. Determined to sue the government for Ted’s rights, they find themselves turning to lawyer Samantha Jackson (Amanda Seyfried) who to their delight turns out to be much more free spirited then your average attorney.

While he does not always succeed in his attempt, MacFarlane deserves heavy praise for making a genuine effort to craft a story for Ted and John that isn’t just a re-tread of what came before, while still retaining the spirit of what made that movie work. While the first one was mainly John’s story, with Ted resigned to being an entertaining obstacle for most of the story, this one really goes out of it’s way to humanize Ted through this court case device, which makes his chemistry with John all the stronger. These two genuinely feel like two best friends who have hung out with each other all their lives, and the movie is at it’s funniest when it simply allows them to play off each other with banter that would be funny even if one of them wasn’t a talking bear. While the screenplay does have to regress John back a bit from the mature point he got to at the end of Ted, MacFarlane doesn’t simply throw it away either. The explanation ultimately given for how things are now not only makes sense, but gains points for even being there in the first place. Also, while Mila Kunis certainly served her purpose very well in Ted, she dosen’t exactly make for the best third stooge, making Seyfried a very welcome presence. Her easy going demeanor meshes well with that of her peers, and her character’s willingness to throw herself into the boy’s shenanigans makes for some very entertaining moments. Even Tami-Lynn, who was such a flat bore last time around gets something to do here, proving herself fairly likable herself as the film goes on.

The humor is looser and more absurd than in the original, which serves as both a strength and a weakness. There are plenty of moments here that are hilariously loopy stoner movie bliss, with some cameos, politically incorrect jobs and references galore, vintage MacFarlane at his most well structured and biting. However, there are still plenty of scenes that just fall flat, carrying out one joke for entirely too long before moving to something new. The movie never truly looses momentum, but it’ll often alternate between something hysterical, and something lame, unlike its constantly funny predecessor. I suppose that’s just the curse of being a talent who mostly writes short jokes for television. There’s plenty of great material spewing out, but no real filter to buffer out the stuff that just isn’t working.

Falling particularly flat is the third act, which betrays the braveness of the rest of the story by needlessly bringing back Giovanni Ribisi’s Donnie, Ted’s stalker. Just like in the first one, there’s a big chase action sequence involving this character and although MacFarlane does have a decent knack for managing comedic chaos, it feels completely forced in just to repeat something from the original. This segment even goes as far as to essentially have the exact same two or three concluding scenes as the first film, and although this repetition is brought up and made fun of, that doesn’t really excuse it. Sorry Seth, but leave the deprecating humor and repetition to the Jump Street guys.

Even if it is as not as fully developed a story as it’s predecessor, Ted 2 does ultimately get the job done in the end. It delivers plenty of the raunchy humor that is expected, while balancing it out with characters that easy to care about, even going the extra mile to give a little depth to those who were underdeveloped before. However, it eventually does fall into the standard comedy sequel tropes to droning effect, loosing some of the goodwill that it stuffs into it’s furry, funny little body. Even so, it’s a perfectly huggable summer diversion that certainly could have worn it’s premise a whole lot thinner than it does. Now let’s see a good one without the bear MacFarlane.