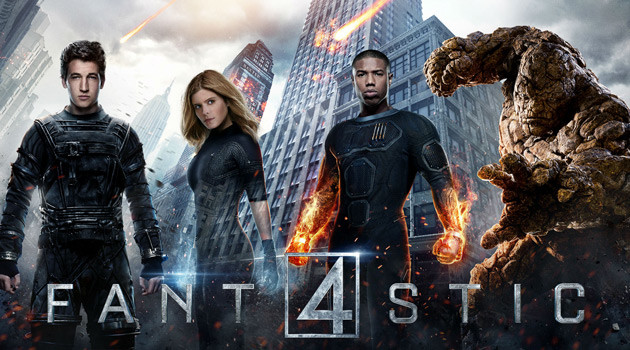 I cannot wait until later in the review to just come out with it: Fantastic Four is absolutely terrible, and the sad truth is, this should have been so easy. 20th Century Fox’s previous attempt at a franchise based on Marvel’s first family was given a lukewarm reception at best. Most felt as though it degraded the characters to juvenile humor and an over-arching cartoon-like sensibility that made it impossible to take seriously on any level.

Now, 10 years later after these train wrecks of a “franchise” released, another genius at the studio thought, “Let’s try what worked so well for Spider-Man and make these happy go lucky characters a little deeper and darker!” Much like the wallcrawler’s re-tooled franchise, they brought in a fresh film-making voice in Josh Trank, who’d previously only been at the helm of one movie, which just so happened to be the wonderful anti super-hero story Chronicle. Seemed like a great idea at the time. However, unlike the series of this film’s inspiration which decided to spin out of control in it’s second run, this one delivers an unconscionable mess to it’s audience from the get-go.

Fantastic Four starts off with the story of 2 boys and their teleportation machine. Reed Richards (Miles Teller) is something of a prodigy who believes that he can create a portal to another dimension with the device, while auto mechanic Ben Grimm (Jamie Bell) provides the spare parts and physical back up. After the guys cause an embarrassing but somewhat encouraging incident at a science fair, researcher Franklin Storm (Reg E. Cathy) decides to take their invention on by providing a lab to perfect the machine. To aid Reed, Dr. Storm brings his adopted daughter Susan (Kate Mara), troublemaker son Johnny (Michael B. Jordan), and antagonistic genius Victor Von Doom (Toby Kebbell) on board as well. When the machine is finally finished, Richards and his crew stage a rouge mission to the parallel dimension that goes horribly wrong. Everyone besides Doom return, but with horrific abilities that will forever change the course of their lives.

While this film is certainly a disaster of cobbled together storytelling among a great deal of other deadly sins, perhaps it’s greatest failure is it’s complete inability to make it’s central team of characters intriguing in any way. These characters certainly have great potential, as all of the young actors here have done wonderful work in the past, but the lackluster material and Trank’s flat direction utterly fail them. Teller’s Richards is something of a mimic of the awkwardly intelligent persona of Andrew Garfield’s interpretation of Peter Parker, but without the quirk and charm that made that performance work so well. We’re supposed to above all else want to follow Reed due to his tenacity and sheer power of mind, but the character we’re given is a cowardly wuss who comes into his own only because the script demands him to. While Teller definitely sells Reed’s intellect, there is simply no power in anything he says, no matter how many forced, un-funny quips the normally razor sharp Teller is forced to deliver. It certainly does not help that his sparing partners are somehow even lamer, particularly Mara’s Sue Storm, who’s greatest personality trait is that she enjoys listening to music to focus. That’s right, this girl can turn invisible and create force fields, and yet her most memorable contribution is wearing a pair of headphones and listening to non-descript music.

Meanwhile, Jamie Bell’s Grimm turns into a badly designed waste of space who not only isn’t given any time to establish this supposedly close relationship he has with Reed, but turns the ‘Thing’ persona into little more than a growling heavy who punches things, and Kebbell is laughable as the criminally underdeveloped Dr. Doom. The sinister “Dr. Doom”, one of the greatest Marvel villains ever, is reduced to an unshaven grunter who spends his days living in a warehouse and playing Assassins Creed. This is seriously our introduction to the character. The only person who comes out of this with a little dignity is Michael B. Jordan, who exerts every bit of his natural likability to try and pull some personality out of Johnny Storm, but even he is only given a few lame quips and a contrived daddy-issues story-line that goes nowhere. However, it’s hard to blame these performers for these turns. They all went down together, and it’s all because of the sheer ineptitude of one Josh Trank.

Yes, I am keenly aware that Trank had his original vision of this film savaged by the studio through this entire production. However, with that in mind, perhaps there is good reason the studio found him unprepared to take on a project of this size. Fantastic Four is a movie that has no idea what it wants to be, and over the course of it’s cobbled together one hundred minutes, never decides. Initially it’s something of a coming of age sci-fi adventure, which is clearly the territory that Trank is most comfortable in. While these segments certainly don’t offer anything terribly unique, it at the very least has a semblance of a story driving it. Granted, Trank guides basic human interaction with all the energy of a tired hospital worker trying to keep dying burn victims from just giving up, but at least they’re interacting at all. As soon as the powers are dolled out, the film descends into an odd, depressing ten minute tribute to body-horror movies as the characters are transformed, before taking a year-long time jump that essentially removes the entire second act of the story. That’s right, we don’t get to see these guys get used to their powers and bond as a team, they just go ahead and do it behind our backs. Then, when it’s time to for the rushed climax that throws a half-baked attempt at Dr. Doom in our faces, we get no sense of camaraderie among the team. They’re just four acquaintances who are mildly inconvenienced by this apocalyptic terror.

It certainly does not help that whatever limited action does finally appear is sewn together with practically no creativity. All of the energy and invention that Trank brought to these types of sequences in Chronicle has vanished, replaced by simply doing the bare-minimum of what the Fantastic Four characters are capable of visually. Although the movie goes a colossal ninety percent of it’s running length without any action to speak of, within five minutes of it beginning, you’ll be begging for it to be over. Fortunately, the movie hears you, and mercifully stops almost instantly after even the slightest momentum has been built.

I have no doubt that there’s fault on both sides of this catastrophe. Trank may have had some solid ideas that Fox truncated and destroyed, but that does not excuse just how lifelessly brought to the screen the moments that do remain are. This is a movie that not only disgraces the super-hero genre, but seems un-aware that there is a genre to begin with. It makes all of the critical mistakes that have made the worst of these films so awful, while doing such an equally terrible job at telling a relatively simple and certainly “lore-free” story that it’s a wonder this cut of the movie was even allowed to release at all.

It’s a jumbled, lazily assembled mess, and what would really be fantastic is if we never heard from this sad attempt at a Fantastic Four franchise again.

Related Topics:Fantastic Four
Up Next