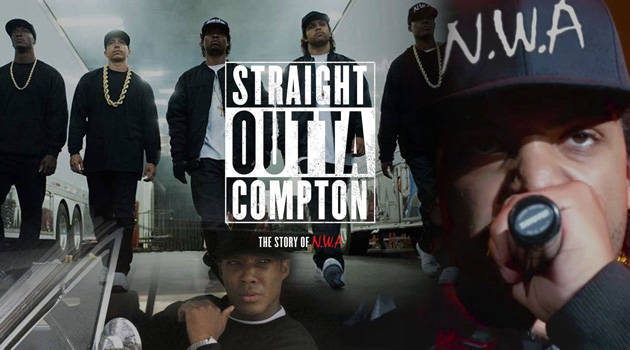 Please bear one thing in mind as I bust out my thoughts on this movie. While I certainly enjoy my fair share of rap music (N.W.A very much included), I don’t claim to be any expert or authority on it. It doesn’t really mean anything to me, it’s just fun to blast out of some open car windows. I bring this up because there are a whole lot of aspects of F. Gary Grey’s sprawling biopic of one of the most influential rap groups in history that I don’t like, but I understand that most of them are more personal taste reasons than objective ones. Perhaps these rhymes just weren’t meant for me to begin with.

Beginning in 1989, we find a group of young men in Compton California trying to find themselves. O’Shea “Ice Cube” Jackson (O’Shea Jackson, Jr.) is a poet at the tail end of high school who isn’t sure exactly what direction to head in. Andre Young (Corey Hawkins) is a dedicated producer who is willing to live in poverty for a while if it means achieving his dreams. Eric Wright (Jason Mitchell) is a bit more of a wild-card, descending into criminal activity every once and a while, but even so having a lot of talent under the surface. When Dre gets a local studio to himself, he has the spontaneous idea to have Eric perform the song they’re working on, and it becomes the mega-hit ‘Boyz N The Hood.’ When money hungry manager Jerry Heller (Paul Giamatti) becomes infatuated with the group, he promises endless fame and fortune for Eric if he signs with them. Eric decides to take the other boys with him, and with their two friends, Lorenzo Patterson (Aldis Hodge) and Antione Carraby (Neil Brown, Jr.) form the group N.W.A. Their music chronicles the hardships and violence of their life in Compton, along with a few choice words for the police.

For all the chinks in it’s armor, Straight Outta Compton has a whole lot to praise, and it starts with the young actors who carry it. These are iconic figures in music history, and it would have been easy for any of these guys to create simple caricatures out of them, costing on the name, but they all rise to the occasion. The strongest of which is most definitely Hawkins as Dr. Dre, not only by far the most empathetic character in the film, but the one who gets the widest range of emotions to run though. Hawkins completely sells just how dedicated this man is to his craft, and how it’s only when people get in the way of his creativity that he loses his temper. Mitchell also has several great moments as Easy E, who for a lot of the film is painted as the golden boy with a huge dark side. We see why the other guys would have issues with him, and why they would rally behind him, and when it comes time to document the ultimate tragedy of that character, Mitchell gets some fantastically authentic moments. As for Jackson Jr, it would be really easy to chalk his casting up to simple nepotism, especially considering how creepily he resembles his father, but he really does capture Ice Cube’s ferocious personality. He might not have as much range as his co-stars, but considering his character doesn’t go through quite as much, it about evens out. Giamatti also shines, bringing a bit more depth than average to the sniveling manager role.

F. Gary Grey does some of his strongest work to date in the directors chair here. He soaks the movie in a gritty authenticity that not only captures the brutality (particularly by the police) these men had to go through, but also the moments in which these guys were less than model citizens themselves. Each scene feels like real people talking and creating, and the strongest moments of the film are where we see how these guys channeled their anger into that creativity. However, Grey does make a fatal error here, and that is sheer excess. The film clocks in at an astonishing two hours and thirty minutes, and there’s a solid forty of those that could be trimmed, especially as we move out of the N.W.A days. It devolves from a very focused, intense story, to a parade of cameos from popular nineties rappers and ‘Behind The Music’ esque corporate moves and group switches that become beyond repetitive. After a while, I just wished that these guys could just get along, or just stop working all together so that I could go home. It’s essentially a Peter Jackson movie set in the hood.

This movie also threw me off and made me a bit uncomfortable with some, and I stress some of what it very un-ironically glorifies. While it is certainly an asset to document some of the bad things these guys did, it’s never put-together in a way that even remotely feels like anything other than a romp, which makes it hard to sympathize with these guys when they start complaining that they’ve been harassed by the law, even when in those situations it was wrongfully. These men are completely corrupted by fame, and by the time they’re pulling out assault rifles on people in hotels, they loose a great deal of their humanity, even if what occurs on screen is authentic.

Straight Outta Compton is definitely a very well put together biopic that really shines in it’s best moments. However, it feels as though Grey was worried that he’d be slapped over the head by Cube and Dr. Dre, who produced the film, if he even slightly criticized these men for their actions or forgot to put one exhausting detail of their lives into the story. As such, it became hard for me to care very much after the most compelling part of the story was over, and there was still a hour plus to go. However, to audience members that this music means a great deal more to, something tells me my problems will be hardly existent to them. To them I say, fire it up, because it most certainly has something to say.

Related Topics:Straight Outta Compton
Up Next

6 Of The Best Spy Movies Of All-Time