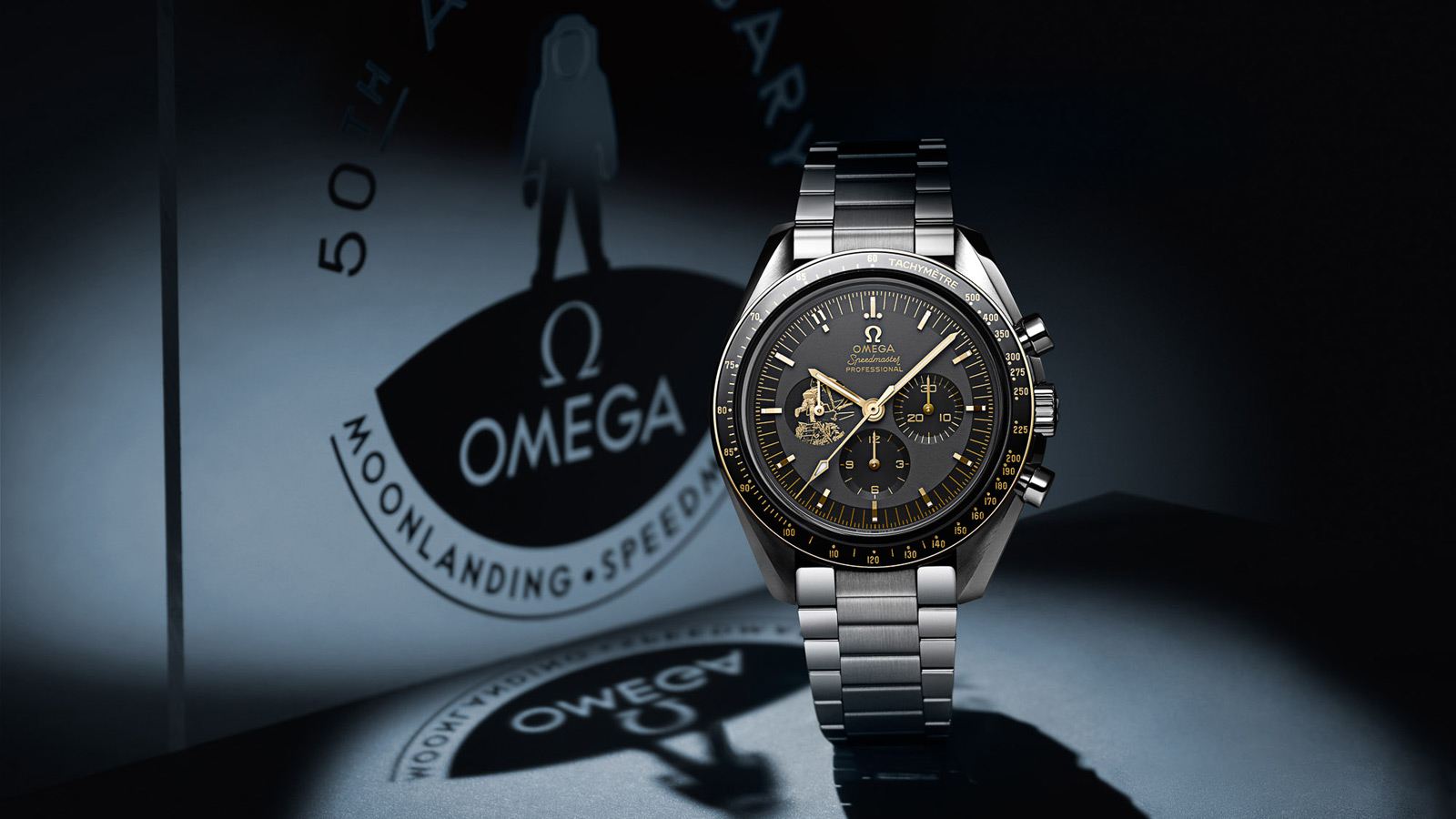 On July 20, 1969, Apollo 11 astronaut Buzz Aldrin became the second human being to walk on the moon — and the first to wear a watch while doing so. His watch? An Omega Speedmaster.

Now, on the 50th anniversary of Apollo 11, Omega has introduced a new Speedmaster Limited Edition that pays tribute to those iconic hours, allowing you to wear the first watch worn on the moon, and relive its journey. 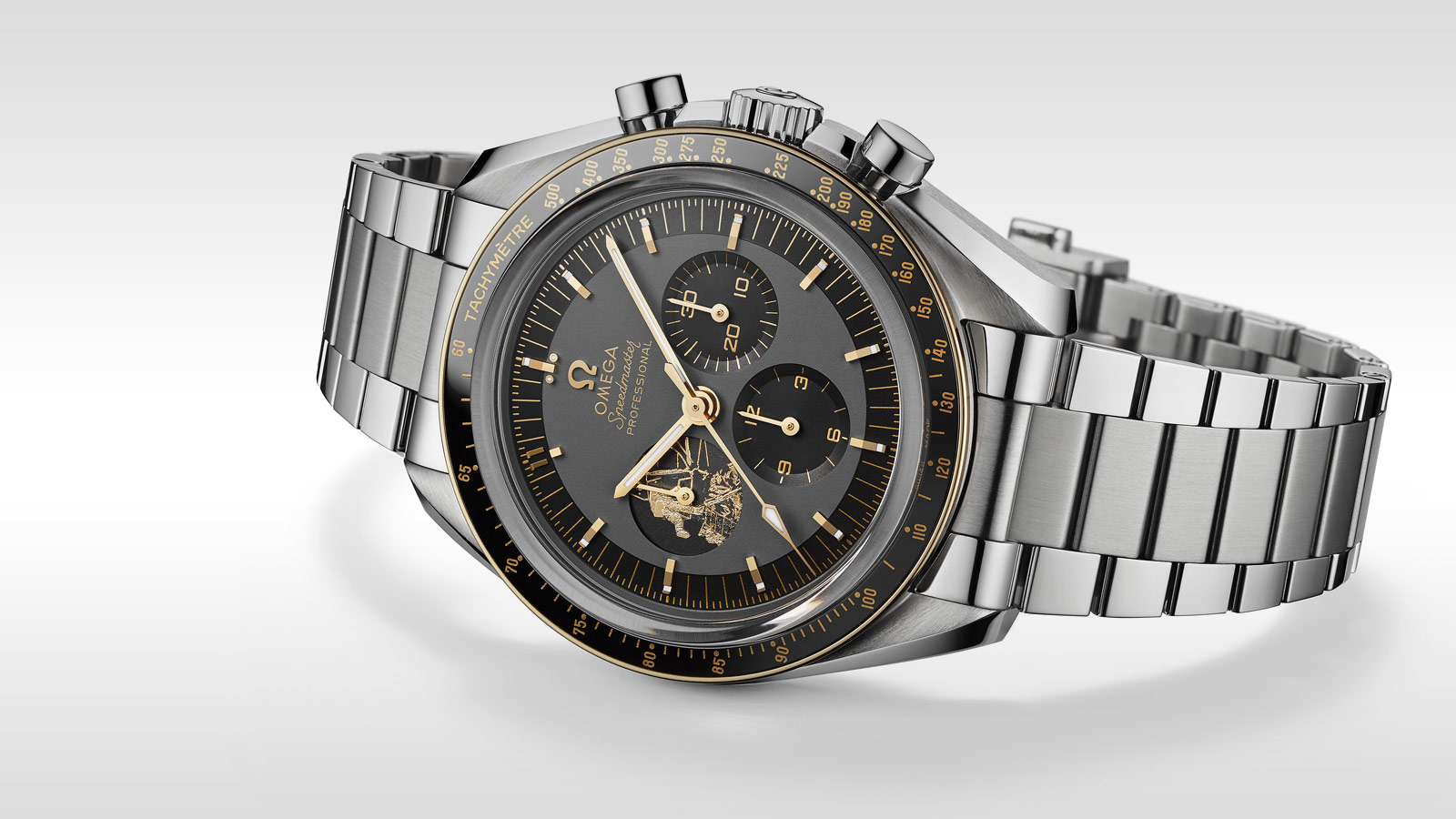 The limited-edition Apollo 11 Speedmaster features a 42mm stainless steel case w/ a polished black ceramic bezel, and the use of 18k Moonshine gold in the indices, bezel, logo, and hands. Commemorative details include a laser engraving of the iconic image of astronaut Buzz Aldrin exiting the Lunar Lander in the 9 o’clock sub-dial, and the 11 o’clock index replaced with an “11” to reference the Apollo mission.

On the rear of the watch, the case features a second laser engraving, this one of the boot print of Neil Armstrong’s first step on the lunar surface with the words, “That’s one small step for a man, one giant leap for mankind,” along with the reticles (crosshairs) that were common to Apollo photographs. 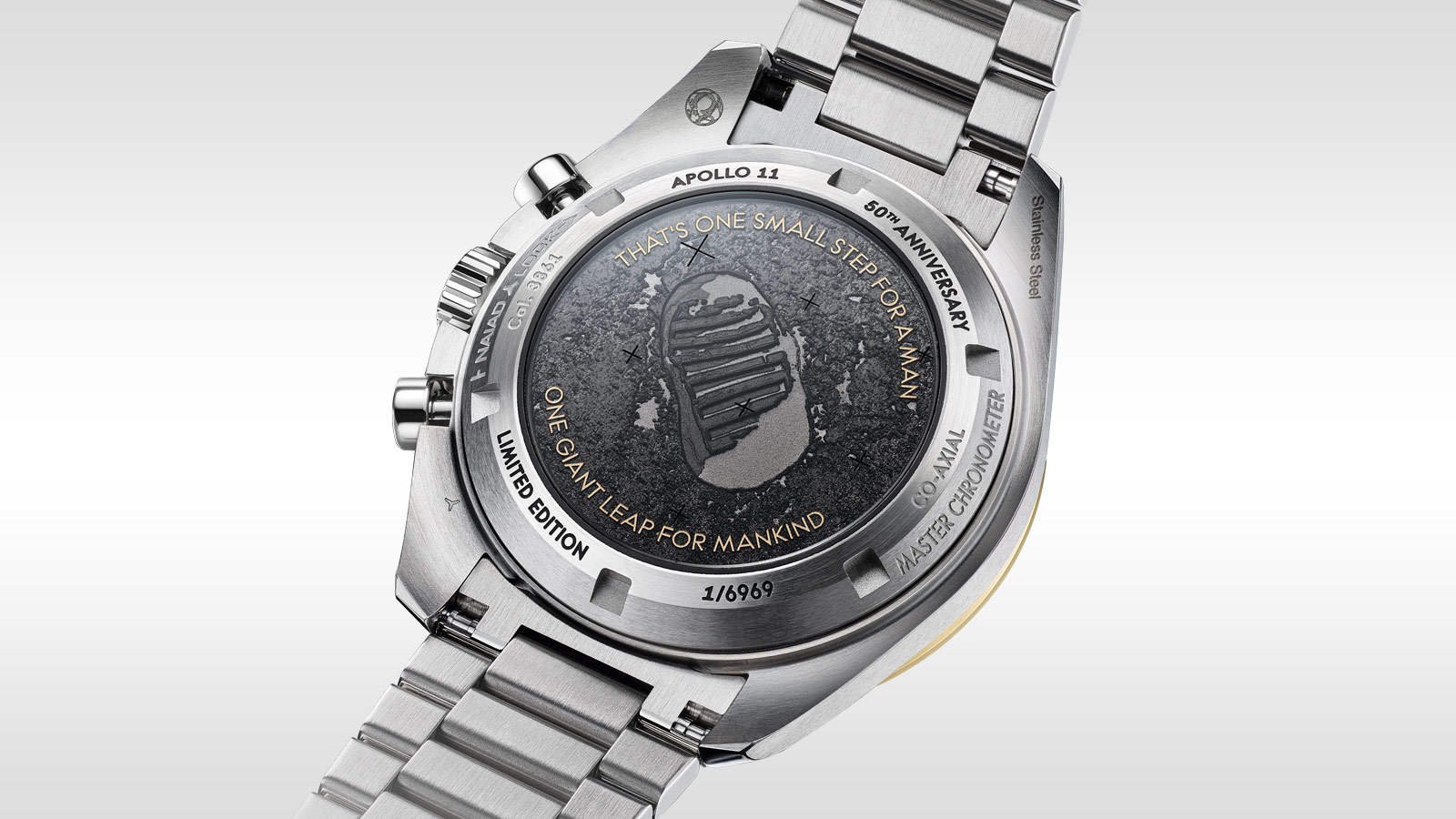 In addition to the metal bracelet, the Speedmaster comes with an additional Velcro strap with black-coated cork (shown below). This is a salute to the Apollo-era “boost protective cover,” the fiberglass structure covered with cork which fitted over the Command Module like a glove, keeping the crew of the Saturn V rocket safe from the intense heat produced at launch.

Omega will be producing only 6,969 pieces (at a cost of $9,650 each), and “Proud owners will find their unique [edition] number engraved in black on the caseback, along with ‘Apollo 11 50th Anniversary,'” as you can see in the photo. 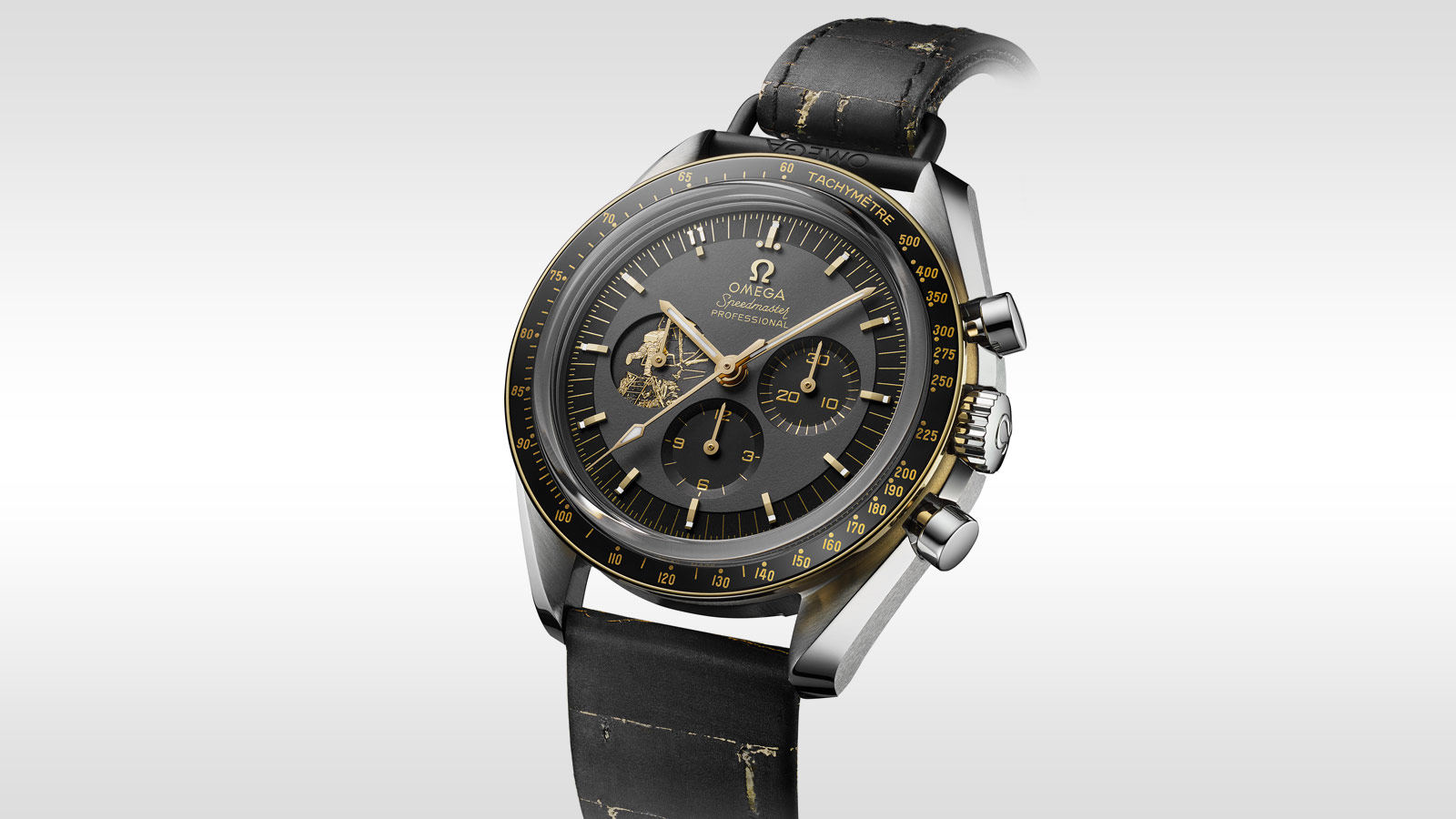 “There were many world-changing moments that defined the first lunar landing in 1969. From famous words to dusty footprints, it was a mission that remains unforgettable in so many ways,” writes Omega. “On the 50th anniversary of Apollo 11, Omega is proud to unveil a new Speedmaster Limited Edition that pays tribute to those iconic hours.” 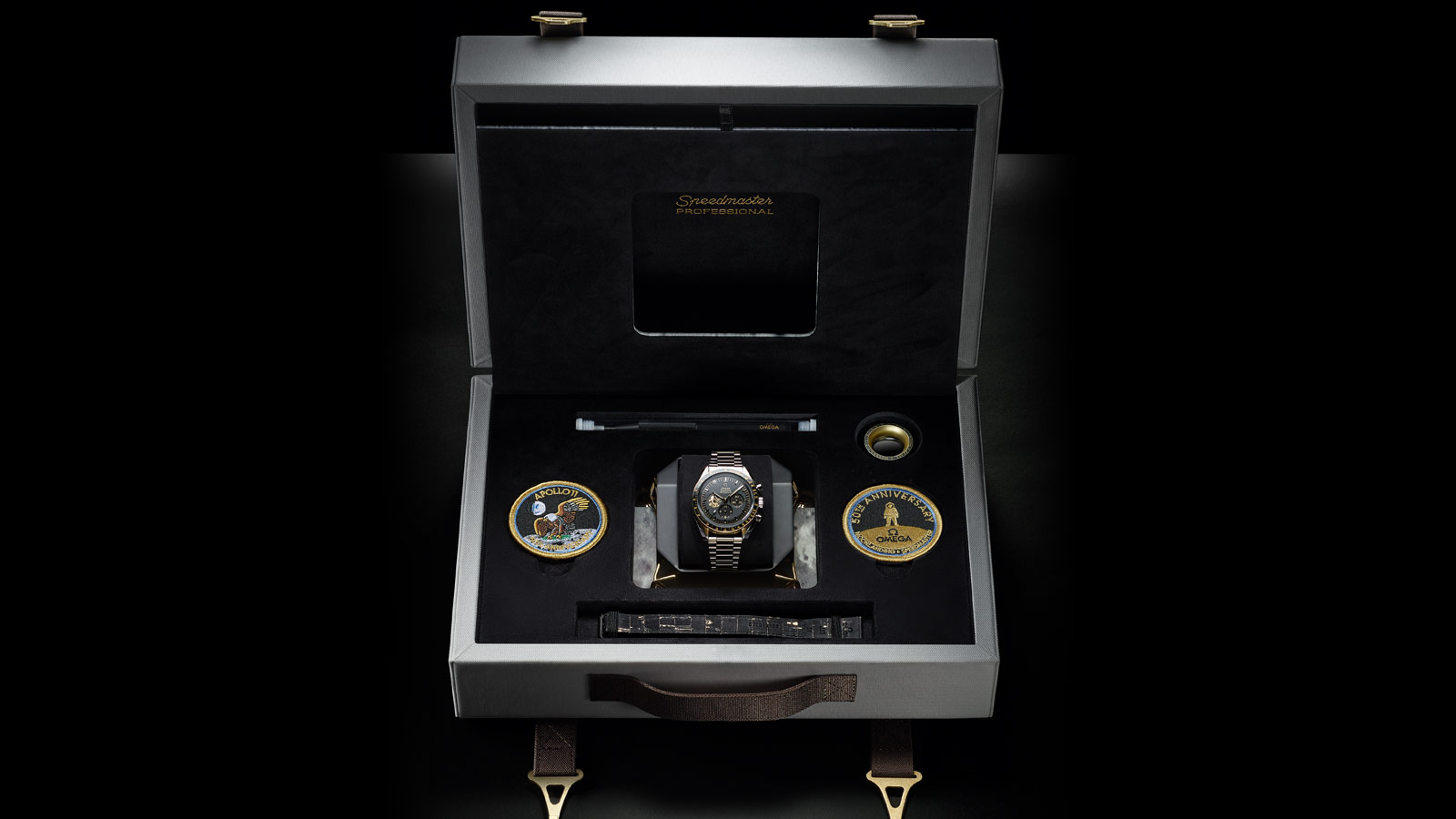 Personally, I think Omega really knocked it out of the park out with this special edition watch, a fitting tribute to the iconic Apollo 11 mission in which they had close ties to. And while they could have only made 1969 of them in keeping with the theme, they decided to produce 5,000 more, ensuring that all fans have an opportunity to get their hands on one.

I’d love to add one of these to my collection, as I’ve always been a bit of a space geek, but I’ve already got too many watches as it is.