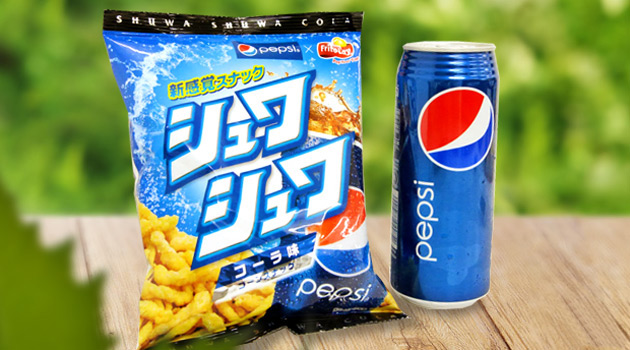 We’ve all been there.. You’re sitting at home, playing video games for hours on end, enjoying a Pepsi with a big bag of crunchy Cheetos. Now, have I ever started eating a Cheetos and had a sip of Pepsi at the same time? Probably, but not intentionally. And I’m sure my reaction was anything but “Yum” when that happened. So it makes me wonder why anyone would ever think of a snack like this.

Yes, in Japan, they’ve introduced a Pepsi-flavored Cheetos that’s officially known as Pepsi Shuwa Shuwa, which I hope is Japanese for this is disgusting. It really is an onomatopoeia for the sound of carbonation in a soda, go figure! Check out this video, where this brave soul buys a bag of them at the store to try out.

He said the Pepsi-flavored Cheetos has almost a pop rock sensation to it, which sounds extremely disturbing.

What other strange food collaborations have you heard of? I think this is one of the most obscure ones, along with the meat-flavored ice cream. Would you try these Pepsi-flavored Cheetos? I’m a guy that’s willing to try anything once, but this concept is pretty strange, even for me.

Leave a comment below, and let us know your thoughts on the Pepsi-flavored Cheetos. And if you’ll be in Japan anytime soon, pick up a bag and let us know what you thought of ’em!

Classy Bride Walks Down The Aisle To Buckcherry’s “Crazy Bitch”