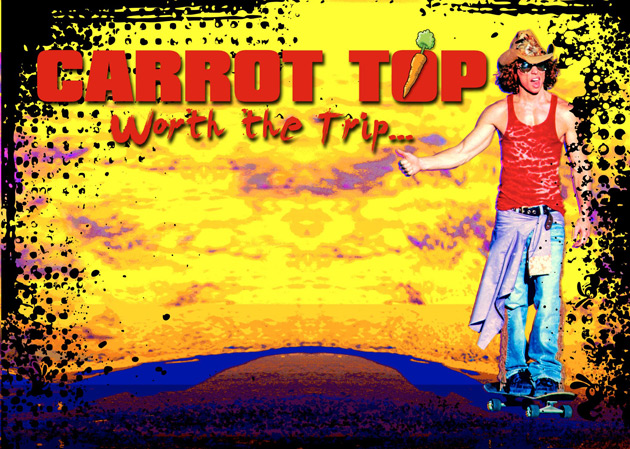 Have you seen Carrot Top perform before? The first time I saw Carrot Top was back in the mid-90s, when he performed at my college. It was my first time seeing a so-called “prop comic”, and I thought he was an absolute genius. I saw him again in 2000 at the MGM in Las Vegas, and he was even funnier than before.

He made the move to the Luxor Hotel and Casino back in 2005, where he now performs almost 300 shows a year in the Atrium Theatre. I’ve been wanting to see him for years now, but it seemed like every time I was in Vegas, his show was dark. Thankfully, he was performing the last time I visited Las Vegas, and I was able to score tickets to his show.

Carrot Top has become somewhat of a punch-line himself, due to his freakish looks and crazy red hair. But he’s been making a living doing comedy in Las Vegas for over 20 years, which really says something.

My wife wasn’t sure what to expect coming into the show, but halfway through the show I looked over and she was laughing hysterically, tears streaming down her face. Yes, the show is really that good.

Carrot Top found a winning formula early on in his career, and he’s stuck with it. He uses crazy props and wacky inventions to keep audiences in stiches as he pokes fun at pop culture, politics, music and whatever the real world has to offer. Unlike other comics who will recycle jokes for years on end, his material is VERY current, often talking about things that happened just a few days ago!

He also engages with the audience quite a bit, so don’t sit in the front row unless you want to get picked on.. This poor girl from Columbus got the brunt of it, but it was all in good fun. She had such a good time that she said she was coming back the following night!

There was also a point in the show where he handed out shots of Crown Royal to people in the front rows, and yours truly got the very last shot. Of course, when he saw my shaved head, he made a quick joke about Velcro, and then he “stuck” his hair onto my head. Funny stuff.. Sweaty, but funny.

Honestly, by the end of the show, my face was hurting from laughing so much. My wife was a newfound Carrot Top fan, and she was already asking when we could go see him again. 🙂

If you’re coming to Las Vegas, and you’re looking for fun evening out, be sure to check out Carrot Top at the Luxor. I promise, you won’t be disappointed!