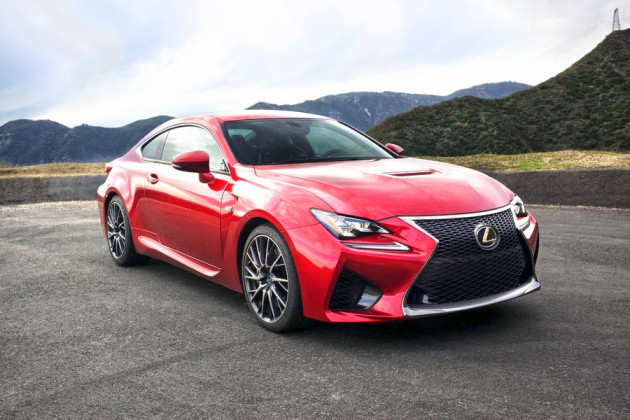 The Lexus RC F is one of the most beautiful cars on the road. It’s almost too beautiful and when I first saw it, I thought for sure it was just a concept and not a production vehicle. Then it arrived in my driveway as a press loan for a week. Wow.

Heidi Klum is hot, Brooke Shields is classy, and Adriana Lima is beautiful. The RC F is all of those things. It’s a perfect package of performance, good looks, and luxury that comes together as one of the sexiest cars on the road today.

With the 2015 RC F, Lexus is squarely aiming for the European crowd, gunning to take on the BMW M4 and the Mercedes-Benz C63 AMG. This car definitely brings the game, though whether it’s better or worse is still up to consumers to decide. Much of this will come down to taste and brand loyalty, as buyers in the luxury sports coupe segment tend to be pretty brand pretentious on the whole. 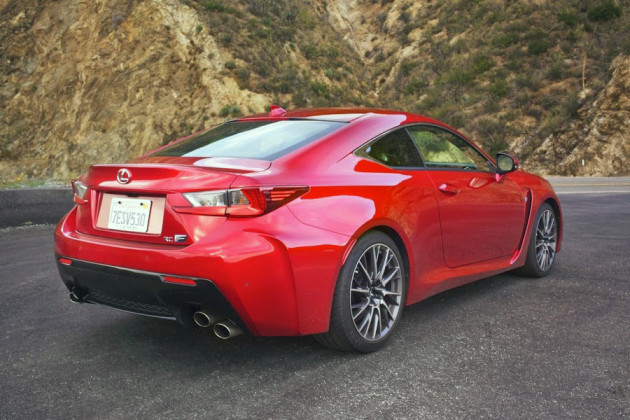 For its strengths, the Lexus RC F has its stellar looks, a powerful V8 that churns out 467HP, and a beautiful interior. For weaknesses, it has a heavy drive dynamic and a bit less acceleration than some rivals to go with its high amounts of interior road noise.

When the Lexus IS F took a bow last year, many of us were concerned that Lexus might be leaving the true performance market altogether, relegating the “F” name to just a couple of sedans and trim levels, leaving out a flagship performance coupe. Luckily, the new F car they showed as a concept quickly turned into reality as the 2015 RC F we finally got to drive. The engine is the same 5.0-liters of displacement that the IS F carried, but outputs fifty more horses and several more pound-feet of torque as well. In a smaller car.

Yes, there is a god of automotive happiness. He looks with favor upon the RC F. 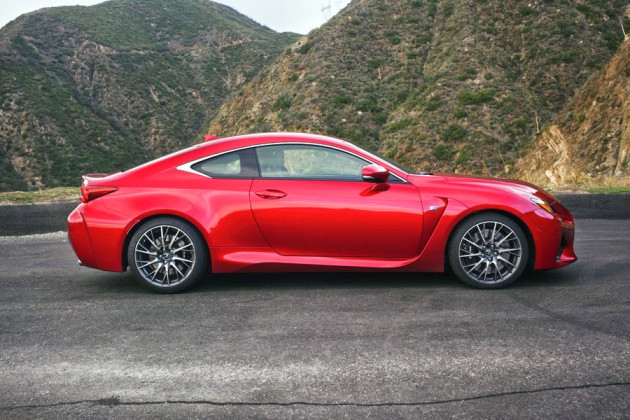 The car’s exterior is phenomenally lovely with a lot of lines and aggressive styling. It toes the line of becoming gaudy without going over and comes off instead as being brash, but beautifully refined at the same time. The abundance of lines and curves creates shades and nuance that are brought out by excellent color choices such as the showstopping Infrared color we drove. The multiple curves and lines on the hood and fenders create varied color palettes in different lighting while the sharp corners and raised edges on the rear quarter and fascia bring out even more.

Inside, the Lexus RC F continues this look with an interior that boasts a perfect mix of hardline sports car looks and soft luxury accouterments. The front seats are NuLuxe F-spec sport seats that look thin and sporty but which don’t sacrifice comfort. The shoulder portals for the five-point harness pass-through are a great touch, despite the 5-point not being present, and the optional heated and ventilated leather is well worth the upgrade price. The stitching is beyond comparison in this market, adding a lot to the look of the RC F’s interior. 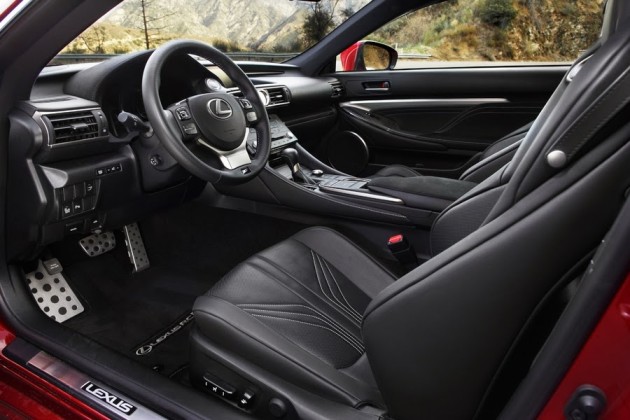 Most Lexus fans will be immediately familiar with the driver’s layout in the cockpit of the RC F and all coupe fans will realize that the back seats are mainly for show. The trunk is surprisingly accommodating, though, with more space than would seem likely.

Out on the road, the beautiful natural V8 growls happily when pressed and the 2015 RC F rockets well with sub-5 0-60 mph times being an easy feat. The sport-tuned suspension in the RC F is tight and unforgiving on the road, as a sports car’s chassis should be. The cabin noise, however, is very high in the RC F and reminds us of cheap $14k cars for its resonance and persistently high level. Cornering is another learning curve for the RC F. The car feels very heavy and as such, tends to feel as if it’s just about to tip or slide when hitting a hard turn. Until the driver gets used to this, that means slower curves. 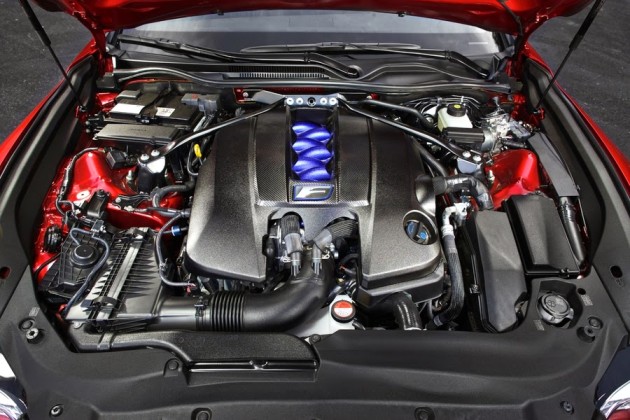 On the up side, though, the engine emits excellent exhaust notes across a low spectrum and the eight-speed automatic transmission shifts faster and more precisely than any other Lexus we’ve driven. It’s not quite as good as a dual-clutch and the paddle shifters still impart a short delay between trigger and shift, but it’s far better than other Lexus cars we’ve complained about in the past.

In all, the 2015 Lexus RC F is by far the best-looking car we’ve seen in a long time. Its lines are classic, it’s look is timeless, and its interior is beautifully made. A well-wrought return to the sports coupe for Toyota’s luxury brand and one that bodes well as a new beginning.