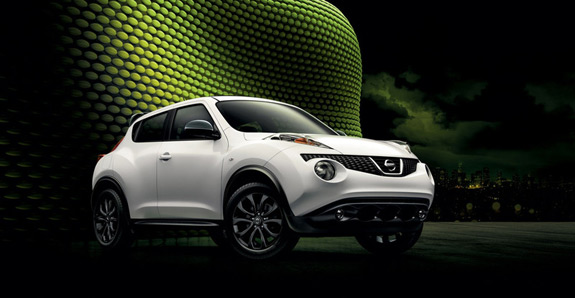 In its first 2 years of production, the highly innovative Nissan JUKE has been hard to ignore. Its aggressive styling has been matched only by its dynamic performance – driven by its standard 188HP 1.6L Direct Injection Gasoline Turbo, 16-valve DOHC aluminum-alloy inline 4-cylinder and available advanced torque vectoring AWD system. So it might come as a surprise that Nissan is giving JUKE a slightly more stealthy appearance with a new accessory grouping called the JUKE Midnight Edition.

Available as a Nissan accessory package on all 2013 JUKE S, SV and SL models, the Midnight Edition features unique 17-inch Black Wheels, a Sapphire Black rear roof spoiler, and Sapphire Black mirror caps. The package costs $1200 (MSRP), saving you over $500 in you purchased the pieces separately.

“The Midnight Edition JUKE stands out by its subtlety,” said Al Castignetti, vice president and general manager, Nissan Division, Nissan North America, Inc. “The combination of black-on-black-on-black wheels, spoiler and mirrors gives JUKE a dramatic new look, which we think enhances its already bold styling. We expect it to be a very popular addition to the JUKE lineup for 2013.” 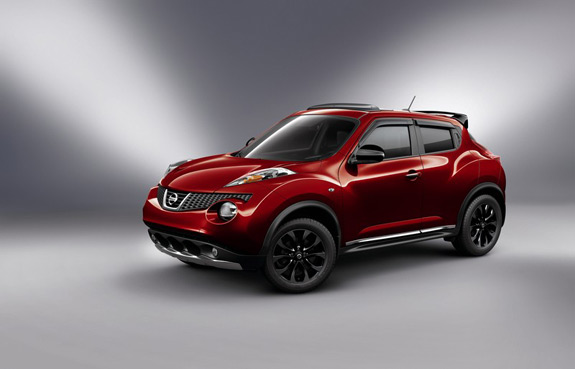 Other enhancements to the 2013 JUKE include:

The 2013 Nissan JUKE with the new Midnight Edition will be available at Nissan dealers nationwide beginning in September.