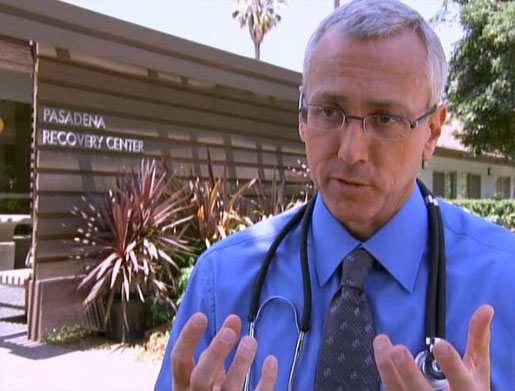 Seriously, they were this big!

Dr. Drew Pinksy turned on the TV one night and was dismayed that he couldn’t find himself on any of the channels. “How could this be?! I’m Dr. Drew Pinksy!” Yes, Dr. Drew is a bit of a media whore, and you’ll never know where he’ll pop up next.

My first experience with Dr. Drew was in the late 90s, when he co-hosted Loveline with Adam Carolla on MTV. Loveline had been a popular radio show since the early 80s, but the show wasn’t broadcast in my area. So the MTV show really introduced Drew to a whole new audience, and put him on the map.

Over the next decade, Drew went on a media blitz, showing up on a TON of shows, including Big Brother, Strictly Sex with Dr. Drew, Strictly Dr. Drew, Sex.. with Mom and Dad, Celebrity Rehab, Sober House, and Sex Rehab. He’s also been interviewed by a variety of news programs whenever some celebrity gets into trouble with drugs.

Now, Dr. Drew is joining HLN’s nightly lineup, and bringing his expertise as a practicing physician and specialist in addiction medicine. The aim of Dr. Drew’s new show is to help people while making a real difference. Driven by current events, “Dr. Drew” on HLN focuses on the human – and human behavior – at the center of the story.

But long before Dr. Drew made his way to HLN, there was Loveline. And in this exclusive HLN interview, Adam Carolla discusses his first impression of Dr. Drew and the camaraderie they had while working on the show. First impression? “Sorta like a bad sandwich joint. Consistent. Not great. But you know what you’re getting when you get the tuna melt.”

Just Listen To The Sweet Sound Of This Ferrari FF!

Kurt Angle Arrested for Being Drunk in a Car