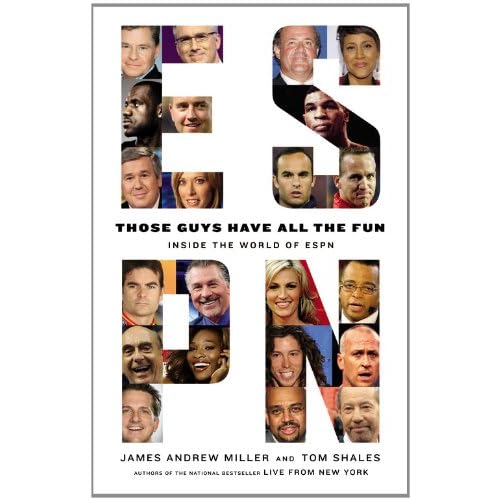 Those Guys Have All the Fun: Inside The World Of ESPN tells for the first time the complete, unauthorized story of ESPN’s founding and extraordinary growth, as told to bestselling authors James A. Miller and Tom Shales by the people who lived it.

Chris Berman, Robin Roberts, Keith Olbermann, Hannah Storm, Bill Simmons, Tony Kornheiser, Stuart Scott, Erin Andrews, Mike Ditka, Bob Knight, and scores of others speak openly about the games, shows, scandals, gambling addictions, bitter rivalries, and sudden suspensions that make up the network’s soaring and stormy history. The result is a wild, smart, effervescent story of triumph, genius, ego, and the rise of an empire unlike any television had ever seen.

In Those Guys Have All the Fun, you’ll find sports, celebrities, atheletes, sex, parties, friendships, rivalries, fights, money, racism, sexism, big business, gambling, and more sports. It’s all here in the words of the people who lived it. For example:

It’s a MASSIVE book, coming in at 763 pages! There’s a ton of material here, but I felt that the book was padded with too many historical footnotes and dull anecdotes. They could have cut out about 200 pages and no one would have been the wiser.

Nonetheless, Those Guys is a must-read for the ESPN enthusiast, offering up all the juicy tidbits and sure to keep you reading from cover to cover!

Those Guys Have All the Fun is currently on sale at Amazon.com for just $14.91, so be sure to pick up your copy today!

The Halfway Point of the ESPN History