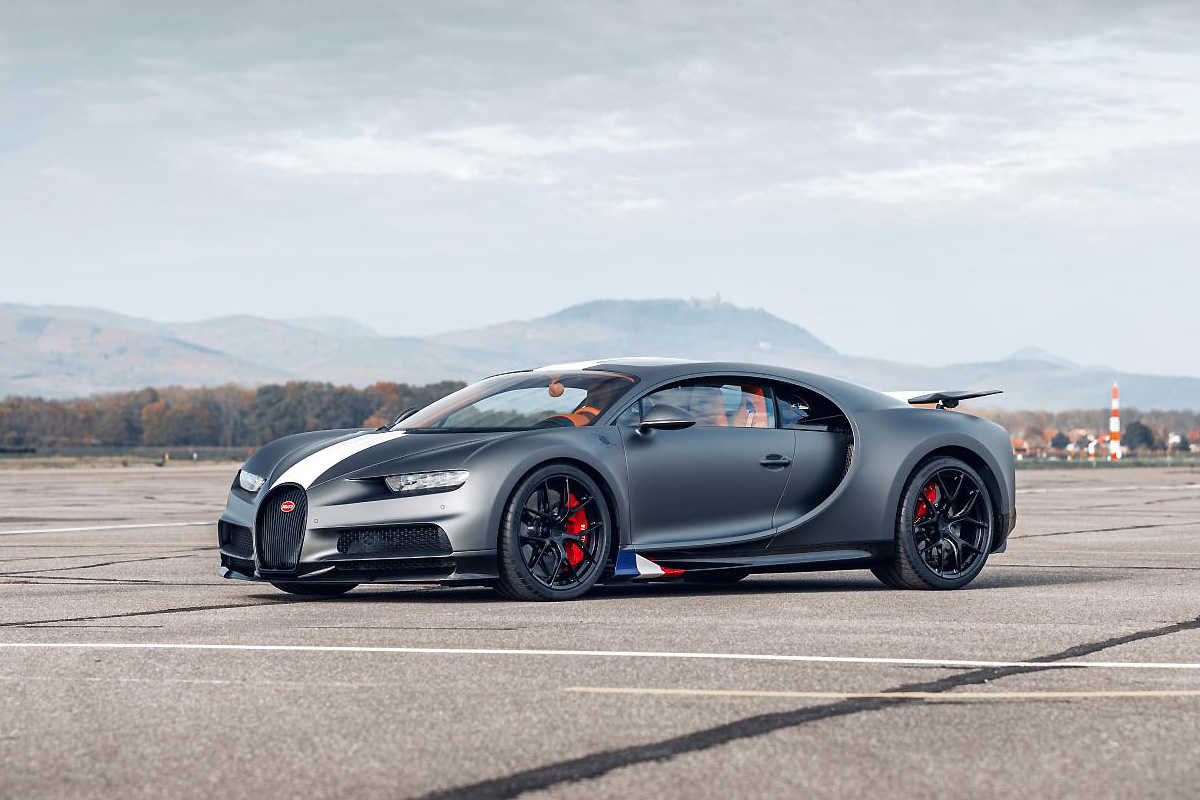 Feast your eyes on the Bugatti Chiron Sport “Les Légendes du Ciel”, an exclusive edition to honor its racing drivers from the “golden decade” that will set you back a cool $3.42 million.

Bugatti has had close associations with aviation since the company was established more than 110 years ago. Many successful Bugatti racing drivers, such as Albert Divo, Robert Benoist and Bartolomeo ‘Meo’ Costantini, flew for the French Air Force. And French aviator legend Roland Garros privately drove a Bugatti Type 18 to be as fast on the road as in the air.

Company founder Ettore Bugatti admired the fearless character and technical expertise of his drivers who were fascinated by high speeds – and also mastered them. On the road, the racing drivers benefited from the experience gained in aircraft cockpits. They in turn admired Ettore Bugatti for his talent as an engineer and were fascinated by his agile, light and speedy vehicles, embodying on the road what their planes were in the sky. Roland Garros even called him the “incomparable artist who alone knows, how to give life to steel.” 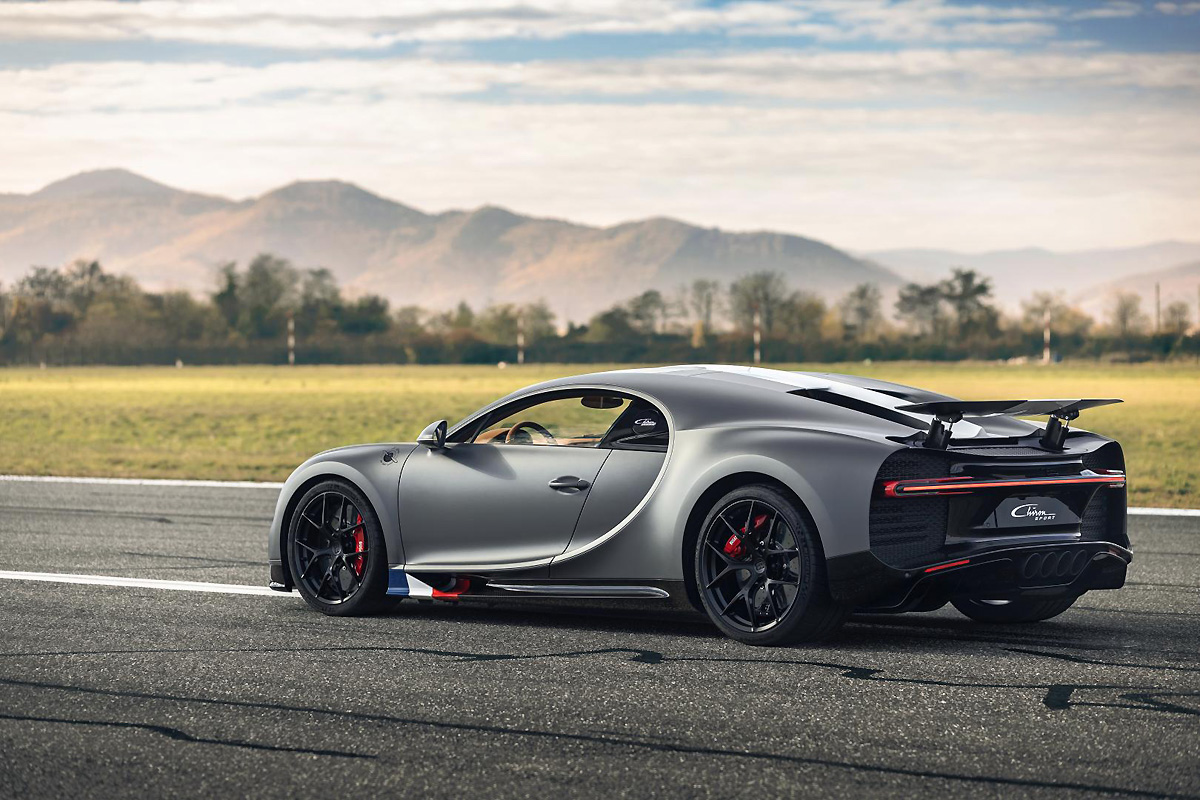 Ettore Bugatti has always been inspired by aviation. In around 1915, Bugatti himself designed aircraft engines and from 1937 he also developed an entire aircraft intended to break speed records. The project was stopped because of the outbreak of the Second World War. But Ettore Bugatti kept in close personal contact with the pilots throughout his life.

The “Les Légendes du Ciel” edition Bugatti is honoring these legends of aviation, based on the Chiron Sport and limited to just 20 vehicles. The new edition references many features of the historic aircrafts in which Bugatti pilots gained profitable experience. In addition to the unusual color of the paintwork, the vehicle includes a special full leather interior with hand-drawn sketches and diamond cut aluminum.

A striking feature of the Chiron Sport “Les Légendes du Ciel” is its special, matte-grey “Gris Serpent” paintwork, a modern interpretation of the exterior color of the aircrafts from the 1920s. This stretches across the entire vehicle and is traversed from the front to the rear via the extending rear spoiler with a high-contrast, white gloss center stripe. The front wings are adorned with the “Les Légendes du Ciel“ logo. The “Le Bleu-Blanc-Rouge” tricolor in Blue, White and Red decorates the front area of the side sills made of exposed black carbon fiber. 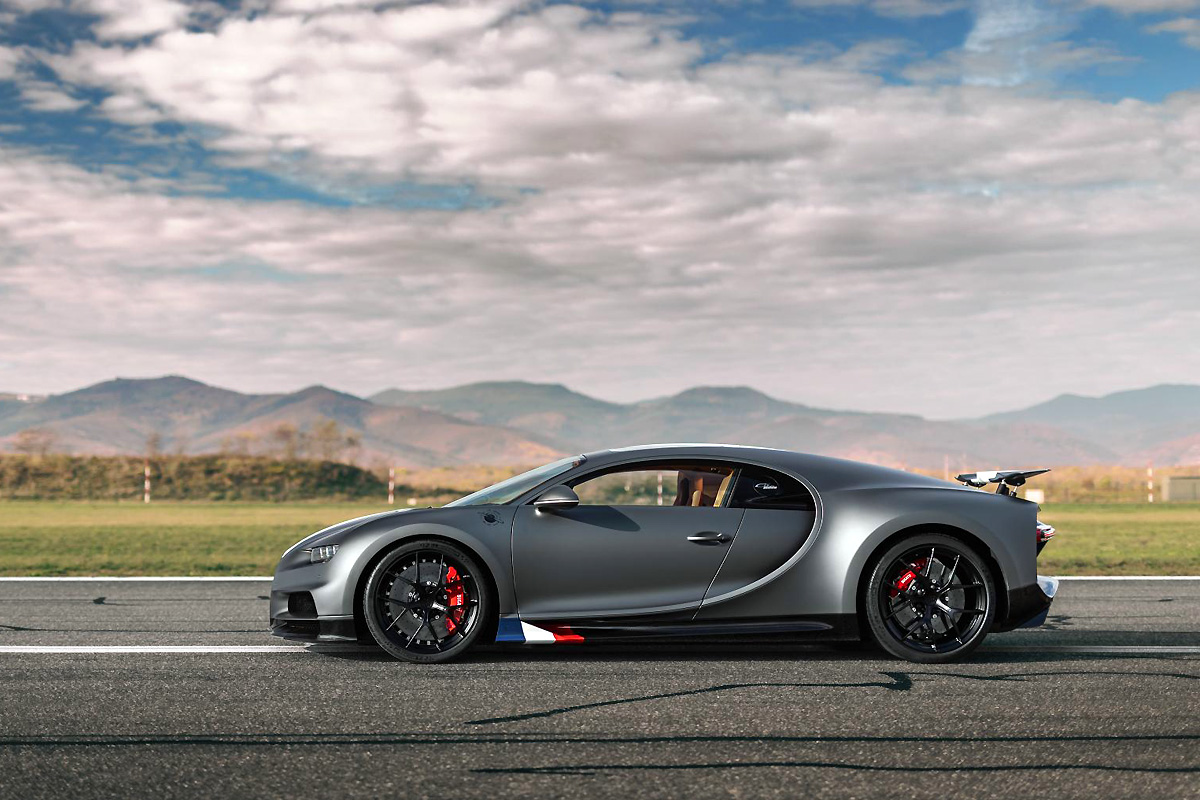 The horseshoe shaped radiator grill also has a black gloss finish, and the radiator grille mesh is made of laser-cut and deep-drawn aluminum, on which the dynamic pattern of the stitched seams is repeated on the leather seats, a detail reminiscent of planes flying in formation in an air parade. The door entry lights project the edition logo onto the ground when the doors are opened. The door sills are made of brushed aluminum with the “Les Légendes du Ciel“ logo on the middle console inlays also characterizes the new edition.

The interior visually evokes aircraft from the past century. Bugatti uses fine “Gaucho” leather for the entire vehicle interior. The light brown leather is reminiscent of natural leather in the vintage aircraft of days gone by. The natural material is contrasted only by aluminum trims, an aluminum inlay with “Les Légendes du Ciel” that can also be found on the headrests as well as the special edition numbering “1 of 20”. Bugatti also optionally offers comfort seats and the glass roof “Sky View” through which occupants can gaze into the sky like in open-top aircraft of the past century. 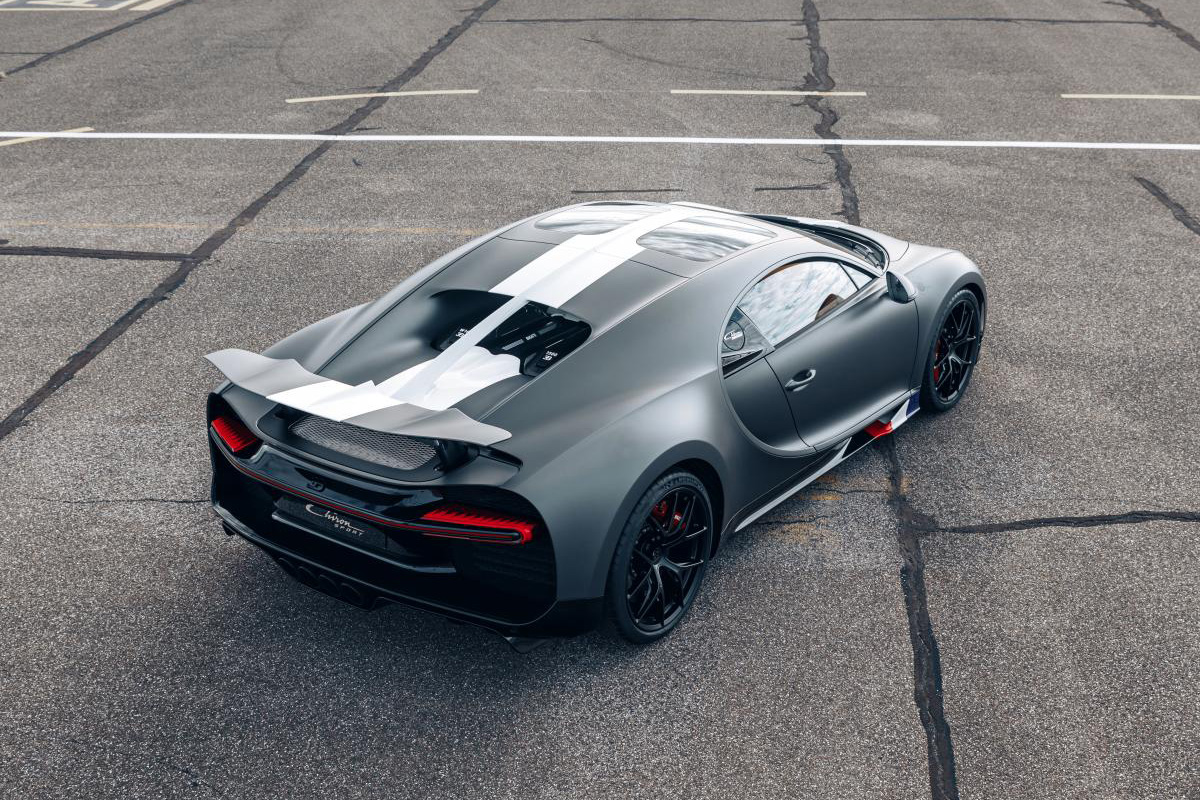 On the door panels there is a hand-sketched racing scene between the Nieuport 17 aircraft and a Bugatti Type 13, which symbolizes the two souls honored by the edition. The Nieuport 17 is a very special aircraft, a French biplane aircraft that was built from 1916 and was very popular with its pilots due to its reliability, speed, agility and maneuverability. The single-seater aircraft was powered by a 9-cylinder engine that delivered up to 130 PS.

The Bugatti Type 13 is a very special vehicle in Bugatti’s 110 year history – It’s the first model to bear the name Bugatti. From 1910, the Type 13 impressed with lightweight design, agility and the high output for the time of more than 15 PS. More than 110 years ago, the “Pur Sang” (thoroughbred) already reached speeds of almost 100 km/h and won many races over the years, laying the foundations for Bugatti’s racing success. The perlée-finish, polished aluminum of the armrest tray and the center console insert, are also reminiscent of the historic racing cars. 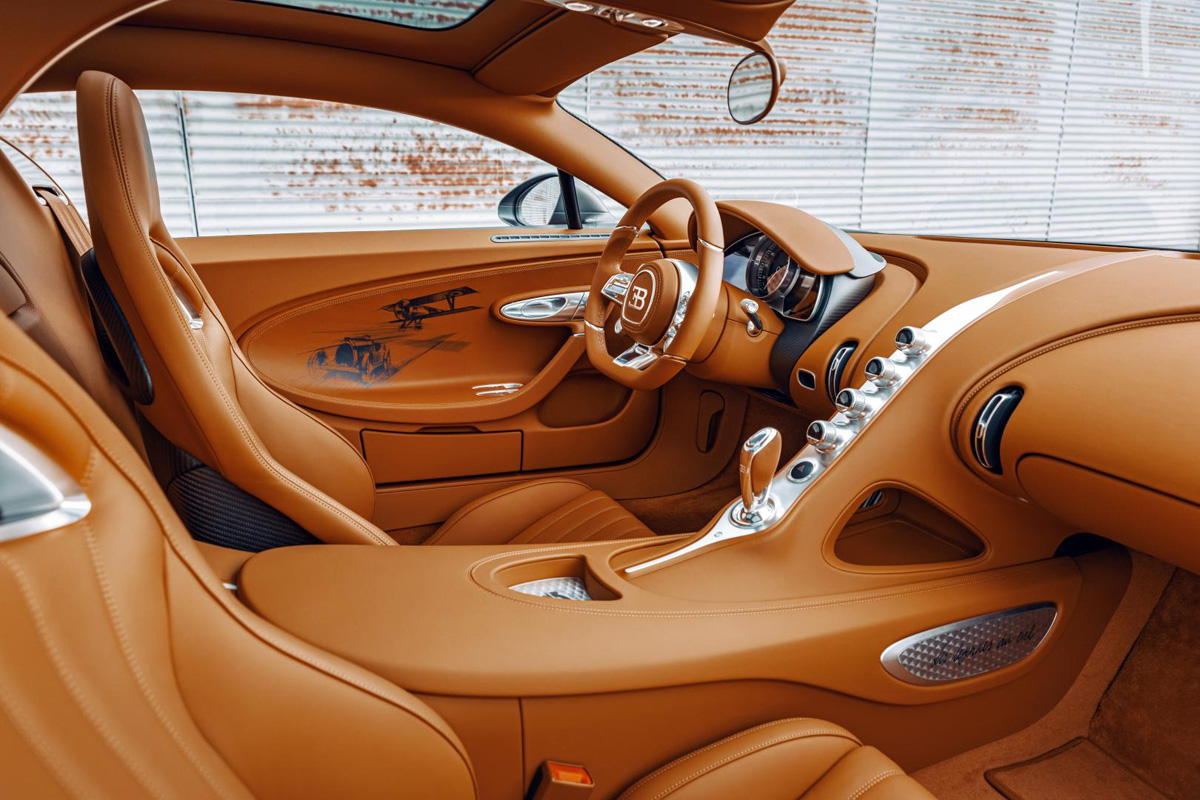 What do you think of the Bugatti Chiron Sport “Les Légendes du Ciel”? 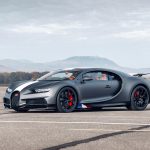 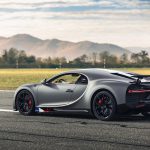 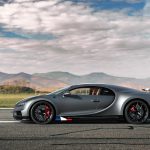 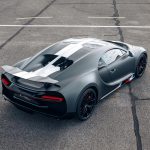 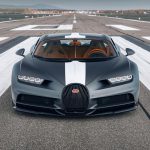 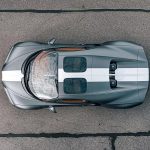 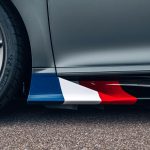 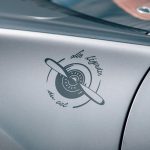 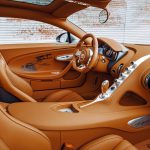 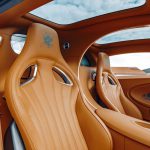