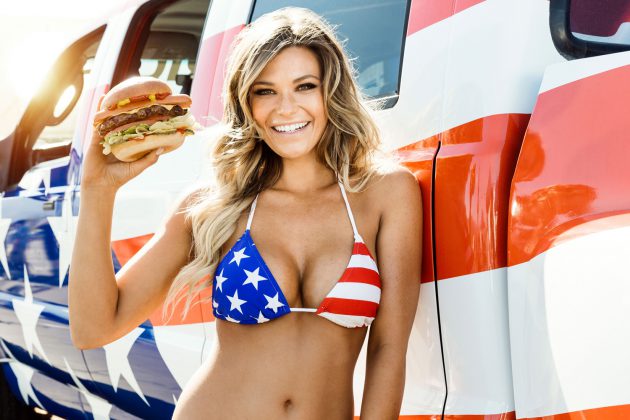 Kate Upton, Sara Underwood, Emily Ratajkowski, and Charlotte McKinney are just a few of the stunners who have done commercials for Carl’s Jr. How to they land such amazing talent? I imagine it involved a whole lot of $$$$, since they’re clearly not in it for the free food..

Samantha Hoopes is the latest model to star in a Carl’s Jr. commercial, and this one is ultra-patriotic as they celebrate a gluttonous burger that only America could invent, the new 1/2-pound Most American Thickburger, which is a cheeseburger with a split hot dog and kettle cooked potato chips.

You can see the commercial here:

If Samantha looks familiar to you, you might remember her from last year’s Sports Illustrated Swimsuit Issue, where she was robbed of the SI Rookie of the Year title (damn you Sara Sampaio!). Nonetheless, she’s been making waves ever since, modeling for Guess, Levi’s Jeans and Plumeria Swimwear, posing for Maxim, and appearing on the current season of MTV’s Guy Code.

Her Instagram game is also on point, so make sure you’re following her on there if you’re not already. Now enough of the talking, here’s what you guys have been waiting for, the pics! 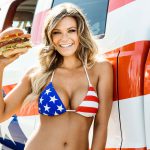