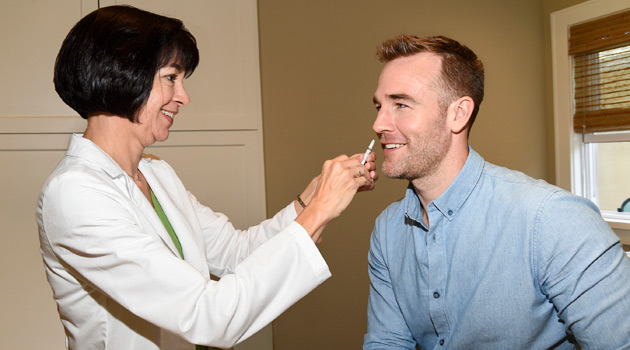 This flu season, actor and father James Van Der Beek has teamed up with FluMist Quadrivalent to dispel common myths about the flu and underscore the importance of getting annual influenza vaccination. As part of the campaign, Van Der Beek stars in an informative and comedic video, called Just the Flu Facts, in which he uses his signature sense of humor to debunk common misconceptions about seasonal influenza that are often barriers to vaccination.

We had a chance to talk with Van Der Beek about his involvement in this campaign, along with his upcoming role in the new series CSI: Cyber. We even threw in a few Dawson’s Creek questions.. Check it out!

M: How did you get involved in the FluMist Quadrivalent campaign?

VDB: I was one of those people who thought there was only one flu vaccination out there. So after AstraZeneca approached me about this and told me that they had this FluMist Quadrivalent which is a mist, a needle-free vaccine in which just a gentle mist is sprayed in the nose, I thought “Wow that’s really interesting.” I have kids, and obviously kids don’t love needles. So that really kind of piqued my interest, and then I talked to them and learned that there were a number of myths about the flu that I thought were fact, which were actually not. So I realized this was an informational campaign that could really benefit a lot of people. When I really got into the research of it, I found that the flu hospitalizes 200,000 people a year, cost hospitals $10.4 billion in lost productivity, with a total of 44 million days of work days lost in the US alone. According to the CDC, the best way to protect yourself against the flu is a vaccination. So when I heard that this FluMist was an option, I thought “Yeah, this is great, I want to be a part of this.”

M: And I can only imagine as a Fad, you want to protect your kids, and it’s something you’d really want to get into because the flu is just such a prevalent virus.

M: Was the video for the campaign your idea?

VDB: I think the initial idea was, because I’d done some videos in the past that have kind of caught on. So I think their pitch to me was “Hey, why don’t you come and make a fun little video which will help dispel some myths about this thing that puts more kids in the hospital than any vaccine preventative disease.” I thought it sounded like ripe ground for comedy.

M: I’m tempted to ask, why for the kid in the video, weren’t you comfortable using your own kids? Was that the campaign’s idea, and if so, how did that come about?

VDB: My kids are a little too young for that kind of work, and I’m not about to put them to work just yet. They need to get to an age when they can decide whether or not they want to be on camera before I even bring that up as an option. I started acting professionally when I was 15, that’s when I decided “I think I can do this for real,” and I asked my Mom to take me to New York and started doing it. So, I think I’ve been in the business too long to put my own kids in front of the camera before they have the cognition to say no.

M: So Dawson’s Creek: Generations isn’t quite a thing yet?

VDB: (laughs) Well, my daughter’s four, so I would say not for another 12-13 years or so, and by then I don’t think anyone will know what Dawson’s Creek is.

M: Obviously she’s only four, so it’s still very early, but has she shown any interest in what you do?

VDB: She’s very creative. We tell stories, we do voices, we do characters. You know, I’m kind of a professional clown really, so I’m great with four year olds, and she plays right back. Just a very sharp, very creative kid. So however that manifests, I’ll support it, but I’m certainly not rushing to put them in the business.

M: That’s very understandable, and I’m curious about when they do get to a certain age and become kind of cognizant of the fact that you are a famous guy, how do you introduce that into their lives and keep a normal lifestyle?

VDB: I think it’s just a fact. It is what it is. It’s just what Dad does. He puts on makeup and pretends to be other people for a living. I think it’s been a fact of live since, you know, before you can remember! I think it’ll be pretty normal I would imagine. I’ve been asked for autographs in front of them before, and usually if I’m with the kids and they require my attention, I’ll very politely say “I’m with my kids, not right now, thank you,” and most people are really very cool about that. So I try to keep it just as normal as possible really. I haven’t done any guest appearances on Yo Gabba Gabba or Sesame Street yet. That would really make me cool in their eyes probably, I’m hoping. Or they’d probably just think I’m still goofy.

M: Have you ever turned down any opportunities in your career because you’re obviously family oriented and you wouldn’t want your kids to have that heightened exposure if you were to say, do a superhero movie or something?

VDB: No, I mean, I still have to provide a life for them, and acting is my biggest income generator. So no, I have not purposely shied away from something that I thought would be higher profile. I mean, I have made choices. It certainly dictates the tone of things that I’ve had interest in. It doesn’t mean that I won’t do something dark, it just has to have a point. I’ve turned down slasher, gore porn flicks. Unless I see a real redeeming lesson…not lesson. God, I hate that word I’m sounding so old, (laughs) but unless there’s a point to it, I don’t think I can do something that is just sensationalized.

M: That does bring me to ask about CSI: Cyber, because in light of everything that’s been going on with cyber terrorism recently with the Sony hacks and everything, it’s interesting that CSI was kind of, aware of that before it was even happening in a sense to bring the show to life. Do you think that that’s why you took it, because you had a sense that it would be important at some point?

VDB: I mean, CSI is probably the biggest franchise in television. It’s a great thing to be a part of, and provides job security. I thought, “Who better to take on this new realm of cybercrime then brain trusted CSI who’s been doing this for 15+ years.”

M: There’s sort of a confidence that it’s going to be quality and there’s not going to be trouble bringing it to life, it’s just going to be there on the day, I can imagine.

VDB: Well, I’ve made enough television to know how tricky it is to make a satisfying 47 and a half minutes told in five acts, especially with this new realm of storytelling, stories that for the most part, a lot of the details are told in a computer, in code! So you want really shorthanded storytellers, tackling all those puzzles to try and solve “how do we explain what a firewall is?. We’ve got visual representations, we’ve got some great graphics, it’s a real fun puzzle to try and solve, and because it’s the CSI team, they’re very good at solving them.

M: Do you think that eventually, as we talked about before, when your kids come into knowing that you’re an actor, do you think that this role and this character on CSI will be a good one to introduce them to your career as an actor?

VDB: Well, I like this guy! I don’t like playing perfect people because that’s the most uninteresting thing in the world, I don’t really think people go for that, and this guy definitely has his blind spots. I do think they’re going to have to be a certain age just because of the content of the show itself. It’s a crime show, so perhaps I’ll show them Castle in the Sky first, the Miyazaki film that I did the voice to, maybe that’ll be a better introduction.

M: Maybe just one day slip “Sandcastles in the Sand” onto their iPod and kind of wait for them to realize that you’re in it.

VDB: (laughs) I don’t think that’ll be the first thing I slip in! Unless they discover that on their own.

Thanks to James Van Der Beek for taking the time out of his busy schedule to talk with us!