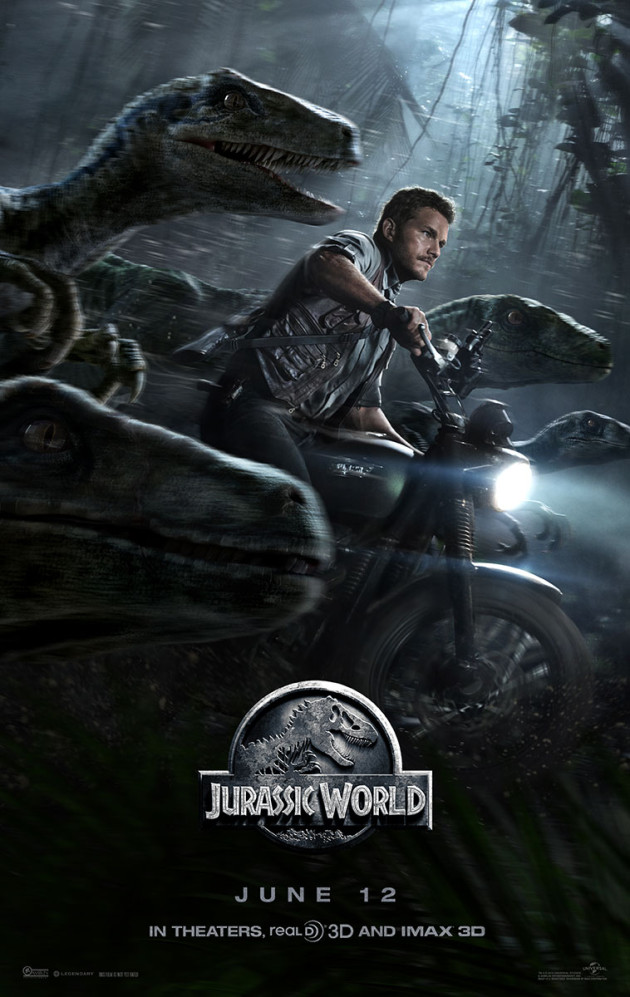 The original Jurassic Park is the type of blockbuster movie that every generation only gets a few of. An iconic, groundbreaking roller coaster ride that used technology in new ways that inspired wonder in all who saw it. A lofty legacy to be sure, and certainly one that the previous two sequels, The Lost World and Jurassic Park 3 were not able to fully deliver on. Well, we’re now fourteen years on from the last attempt, and indie darling and genre film lover Colin Trevorrow (Safety Not Guaranteed) has taken it upon himself to buck that trend, and give us the true sequel that a masterpiece such as the original deserves. It’s definitely a lofty goal for any filmmaker, especially for one so fresh in his career, and as such it is easy to go into this film hoping for the best, but bracing for disappointment.

The story, which is certainly the most inventive of the Jurassic sequels, fully realizes John Hammond’s dream of a completely operational theme park where genetically revived dinosaurs wow thousands of visitors every day. Or at least, they used to. It seems as though the park has been up and running for too long, with people reacting like they’re at any other Sea World type affair. This deeply dismays Claire Dearing (Bryce Dallas Howard), an operations manager determined to increase attendance by any means necessary, even if it means creating a horrifying new species called the Indominus Rex through lab experimentation. Meanwhile, Raptor trainer Owen Grady (Chris Pratt) warns against this experimentation and is proven right when the Indominus Rex gets loose, and starts creating murderous mayhem in the densely populated theme park.

Jurassic World impresses almost instantly with its thoughtful and multi-faceted story. Trevorrow knows all too well that we’ve now seen CGI creatures in what seems like a million and ten other blockbusters, and brilliantly has the world of the film reflect this. The park goers indifference to these truly majestic creatures is our indifference, creating an undercurrent of satire that sometimes bites harder than the creatures themselves. As a side dish, we even have some deeply intriguing conversations about the militarization of these creatures, courtesy of Vincent D’Onofrio’s gung-ho security head, that in turn bleed into the film’s theme of animal cruelty. Even when the movie wobbles a bit, which certainly does happen from time to time, it will often make up for it with just how fascinating some of the ideas presented are. 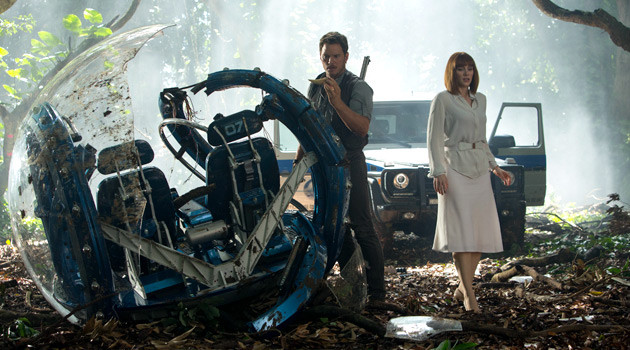 The characters are also nicely developed and portrayed for the most part. Anyone thinking that Chris Pratt needs to rely on his lovably goofy persona of Parks and Recreation or Guardians of the Galaxy is in for a very pleasant surprise here. Owen takes his role as Raptor trainer very seriously, and Pratt pulls us in by giving his empathy for these creatures total authenticity. Everything from the cadence he speaks in, to his vibrant hand gestures when taking, along with his sheer presence in the action sequences completely sells Owen as a hero we can get behind, without constantly having his previous work run through the back of our minds. If there was any doubt that this guy could be Indiana Jones, that’ll stop here. Dallas Howard is given a bit more of a shrill stereotype to play, and as such has to fight to give her moments of spontaneity and humor, but she manages get some good moments in even if perhaps she does not have the chemistry with Pratt that the film wants us to think she does. The supporting cast is uniformly strong, with Ty Simpkins and Nick Robinson adding a nice touch of humanity as Claire’s two nephews who are trapped in the park, Jake Johnson giving us some laughs, and D’Onofrio playing the commanding villain that he could probably give us in his sleep by now.

Although there is a great deal of character and story development here, don’t think for a second that this film skimps on the action. In fact, Trevorrow orchestrates several of the year’s most thrilling set-pieces here. This is a monster movie through and through, and that will not be forgotten once the action gets going. The dinosaurs are portrayed not as video game obstacles, but vicious, relentless creatures who mangle their victims to awesomely brutal effect. The violence here is not only showy, but it’s visceral. No matter how minor the person dying is, we feel the impact of each chomp on their spine. It truly does feel like a thrill ride, constantly escalating to a climax that is simply beyond words. It’s over the top genre movie cheese, but because we care about this story and the people in it, it becomes awesome over the top genre cheese.

The whole experience is so enjoyable that it’s genuinely hard to really find issues within it. Mostly, they lie in small things that perhaps could have been better, but ultimately don’t hurt very much at all. The first twenty minutes or so have a couple of clunky scenes that feel like a dumping ground for all of the exposition so we won’t have to bother with it later. It’s nothing horrible, just a bit sloppy. This is where the weakness in Howard’s character is felt the most as well, making it hard to empathize with her quite as much as the rest of the cast (which the film is even smart enough to acknowledge. Also, the design of the Indominus Rex is slightly disappointing, and for all the mayhem it causes, some more invention in that creature would be welcome to make it truly memorable.

Slight nitpicks aside, Jurassic World emerges as the most entertaining blockbuster of the summer so far, and an absolute slam dunk for Trevorrow. The perfect mix of brains and brawn, it proves to be a more than worthy successor to its iconic granddaddy. It’s the first movie in a long time that gave me the feeling of being on a roller coaster, reminding me of why I love huge summer movies so much, in a season where I could really use a reminder. My recommendation, buy an annual pass to this park, because you’re going to want to come back a couple of times.

Check Out The Official Trailer For ‘Z For Zachariah’