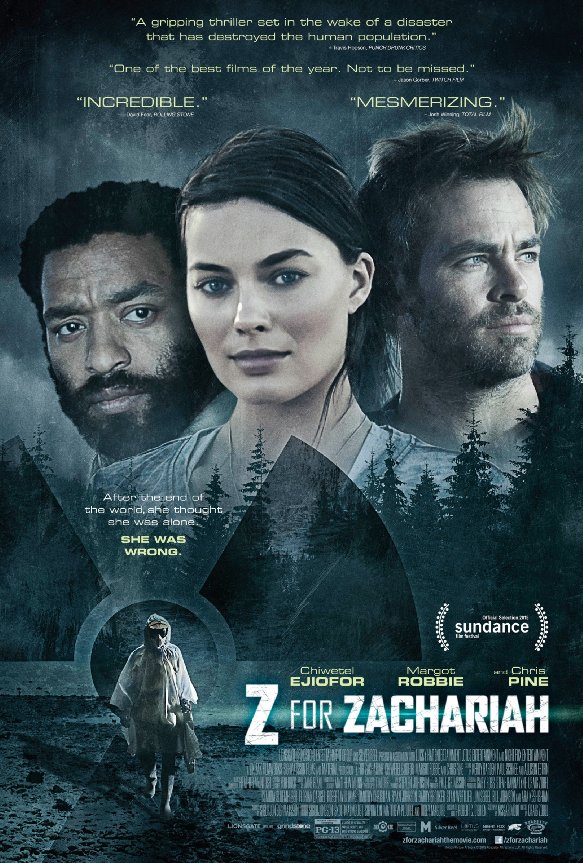 We’ve seen a whole slew of movie trailers come out this month.. But one movie that managed to fly under the radar during all of this was Z For Zachariah, an end-of-the-world movie adapted from the book of the same name, starring Chiwetel Ejiofor, Margot Robbie and Chris Pine.

In the not-distant future, a disastrous radioactive event has obliterated most of civilization. Yet somewhere deep in the American South is a valley that remains untouched; evidence of a micro-climate or some other miracle. A young farm girl, Ann Burden (Robbie), is grittily surviving on her own in this valley, fearing she may actually be the proverbial last woman on earth. Then, she discovers the most astonishing sight of her life: another human being.

John Loomis (Ejiofor) arrives in the valley a cipher; a distraught scientist nearly driven mad by radiation exposure and his desperate search for others. He and Ann share little in common beyond survival. Even so, as Ann nurses Loomis back to health, they build a fragile, imperative strand of trust across the gulf between them – finding solace amidst the eerie reality of their new lives. With all the time in the world, they even dare to imagine forging a future – for themselves, for humanity. But when a stranger (Pine) enters the valley, their precarious bond begins to unravel. Now, all three must grapple with an unstable situation – one of secrets, suspicions and mortal threats.

You can watch the trailer here:

While those big budget, special effects movies are all fine and dandy, it’s these indie flicks that really do it for me. Early reviews have been great, so I can’t wait to check out Z For Zachariah for myself when it opens in theaters August 21, 2015.