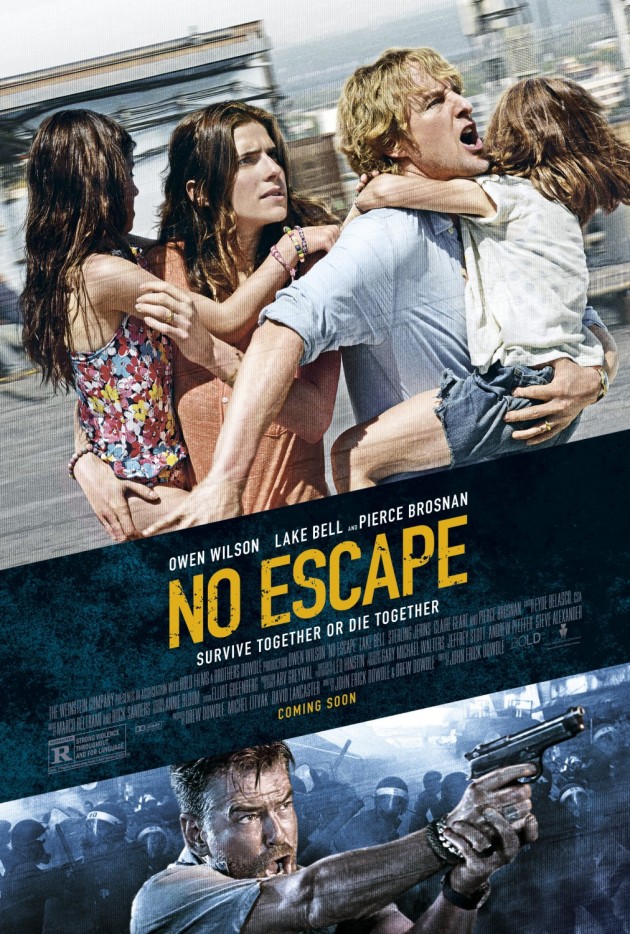 There have been plenty of movies about characters trapped in a horrific situation where it seems like they will not return alive. The realism and severity of these situations often varies, but we as an audience generally try to feel their fear along with them. We want to feel trapped also, but what happens when a movie instills that feeling for all the wrong reasons? When it’s not the opposing force on screen that makes us feel confined, but the very doors that welcomed us into the theater to begin with that now feel bolted down by an iron bar and won’t open until the movie we’re watching finally ends. Well my friends, the movie No Escape finally gives us that experience, and frankly I wish I had stayed home and waited for real life terrorists to come after me.

The movie focuses on the Dwyer family, who has just re-located to an unnamed country somewhere in Asia. Jack (Owen Wilson) is hoping to give his family a new start after his own business venture went belly up. His wife Annie (Lake Bell) and two kids certainly could be taking it better though, with the language barrier being especially annoying to them. However, everybody’s priorities take a big hit when a deadly political uprising starts in the town with the locals killing anyone who stands in their way, with an especially specific appetite for white meat. Jack now must navigate has family out of the mayhem with the help of Hammond (Pierce Brosnan), a former British intelligence agent who has befriended them.

No Escape is a bad movie that cuts on two different levels, so let’s begin with the lesser of the two. I’m fairly certain that director John Erick Dowdle is more terrified behind the camera than his characters in front of it. This is a film that should be about managing mayhem on a grand scale. However, instead of reveling in that chaos, Dowdle chooses to lean on the classic crutches of bad modern direction until they cave in and knock him flat onto his behind. If there is any form of motion going on in a shot, the camera nauseatingly jolts with it. It’s as if the production team had absolutely no way of sweeping over the chaos, so they just had the extras carry small cameras and toss them to one another. Every once and a while, an actual image will peak through, but those are butchered by goofy looking slow motion that removes any sense of brutality from the violence. There are a couple moments of effective tension, particularly in the more contained environments, but the movie will all too often opt for sequences that it simply isn’t well produced enough to portray.

More infuriating than the lackluster presentation is the film’s nauseating xenophobia. Try as it might to be, No Escape is not a Friday The 13th movie. There’s no supernatural force creating destruction, but instead a very realistic and potentially terrifying wave of violence by human beings. However, that horror would be rooted in humanity, and in giving both sides a realistic motive for wanting to do this to one another. Instead, the movie opts for the more lazy, cartoonish approach and essentially turns the enemy forces into Cobra from GI Joe. Faceless, nameless goons who just exist to glower at the camera, shoot people, and be scary foreign people. As such, the movie only works if it’s audience chooses to accept that these people are just plain bad, an insulting and dubious proposition.

The only thing holding this movie together is the competent cast who do what they can with thin characters. Wilson makes for a surprisingly empathetic dramatic lead, fusing his every-man charm with an authentic protective streak. He doesn’t feel like an action hero, but a normal guy who just wants his family safe. He shares some subtle if believable chemistry with Bell, who fills her equally authentic role just as well. Brosnan is the only one who feels out of place, essentially porting over his goofy James Bond persona into a story that certainly does not need any more silliness weighing it down.

As much as No Escape would like its audience to believe that it’s “villains” are shallow monsters, it turns out that the film itself is the one to be resented. This is an ugly, shallowly produced affair that squanders what could have been a riveting and socially relevant premise into mush. Fortunately for the audience, there is a way to escape through those beautiful red exit doors.

Related Topics:No Escape
Up Next