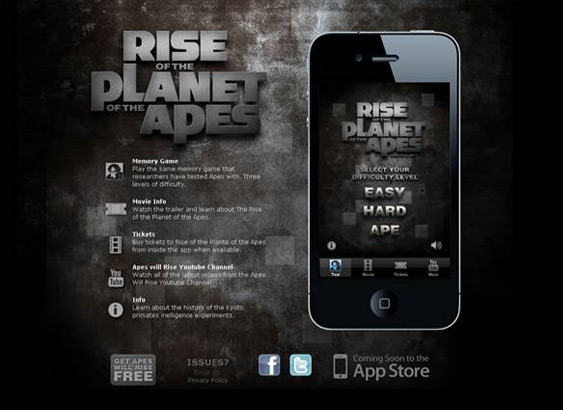 The new Rise Of The Planet Of The Apes iPhone/iPad app ask the question – Are you smarter than an ape? Say what now?!

Based on an actual intelligence test done at Kyoto University, it parallels the central storyline of the upcoming film, in which a scientist’s tampering with the laws of nature leads to the development of superior intelligence in apes and the onset of a war for supremacy.

The test is as simple as it is revealing: The numbers 1-9 appear on the screen in random positions, and then are quickly covered. You must remember their positions, and then touch the squares in numeric order, in order to pass to the next round. A number is added for each round, so after several rounds recreating their proper positions becomes quite a challenge.

A challenge for humans, that is. Studies show that young chimps outperform adult humans in this memory test. “We were very surprised to find this,” Tetsuro Matsuzawa of the Primate Research Institute at Kyoto University said. “But it’s a very concrete, simple fact. Young chimps are superior to human adults in a memory task.”

The app is now available for free download on iTunes.

In addition to the game, the app offers access to the latest content about Rise of the Planet of the Apes, including the theatrical trailer, movie tickets (when available), and the “Apes Will Rise” YouTube channel. You can also learn more about the history of the tests that measured apes’ surprising intelligence.

Rise of the Planet of the Apes comes out in theaters everywhere on August 5th!

Related Topics:iPhone appRise Of The Planet Of The Apes
Up Next

Look Who Else Is Pissed About The Carmageddon!

Star Wars Fans, Help Save A Piece Of Movie History!