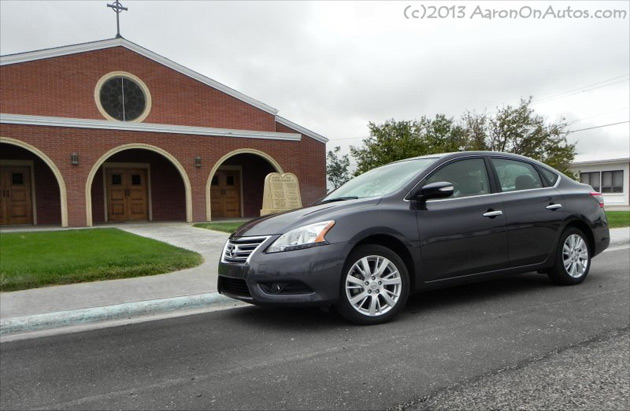 The 2013 Nissan Sentra SL has everything a small family needs from a small sedan. Even with two car seats installed, the Sentra still has plenty of space inside and its trunk is large enough to accommodate a year’s supply of Huggies. The 2013 Sentra SL is very usable as a daily car without looking like every other boring car on the street.

The average reader of Guys Gab is probably not going to think of the Nissan Sentra as a “hot” or “sporty” car; but it is, frankly, a car that sells very well because it fits exactly in the market it’s made for.. and like it or not, you are probably that market. It’s great to drive a hot car like a Lamborghini, a Porsche or the latest GT500, but the reality is, most of us drive what the industry calls “bread and butter cars.”

The base price for the 2013 Sentra is just shy of $16,000, while the fully upfitted model we drove came in at $22,400. At that price, and for the great stuff it includes, it’s hard to imagine going for a lower trim level than the SL. It includes beautiful, premium wheels, just enough chrome trim to give it the right amount of bling factor, and the audio goodness of Bose inside. In Eco mode, the Sentra can surpass its EPA highway rating of 39 mpg, but in Sport mode it supplies enough power to make the freeway on-ramp fun. Fuel economy averages about 34 mpg in the 2013 Sentra. 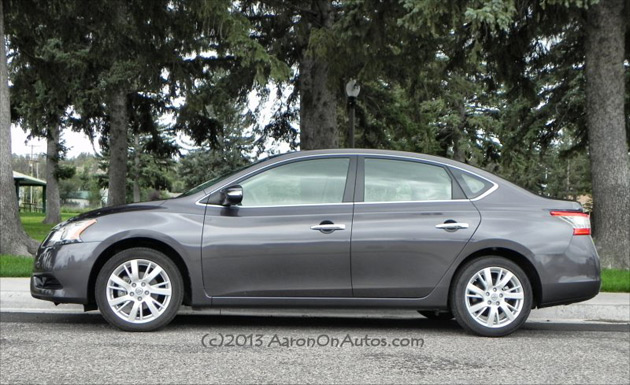 Under the hood is a little 1.8-liter dual overhead camshaft (DOHC) inline-four cylinder engine that puts out 130 horsepower and 128 lb-ft of torque through Nissan’s great Xtronic CVT (continuously variable transmission). A six-speed manual is standard in the base FE+ trim and an option on several other trim levels. Most will find the CVT to be far more efficient.

The full redesign the car received this year is a far cry from the generally boring look it had previously. The new build is similar to the new Altima, it’s bigger brother, but still maintains a style of its own. Being a small sedan, the hood line is not as long and its body has a slight forward tilt akin to the drag racers of old. The SL package has a lot of extra standout features that make it worth the price.

Inside, the 2013 Nissan Sentra SL is very well outfitted. Seating has been improved to be far more comfortable and the front seats offer more shoulder, hip, and head room. The back seat easily accommodates two car seats and has enough space between to let another child sit between or add a third child safety seat, should it be required, you rascal. The trunk is huge, a hallmark of Nissan sedans. The extra two inches added over the previous-generation of the Sentra all went to interior space improvement and it makes the car stand out from the competition. 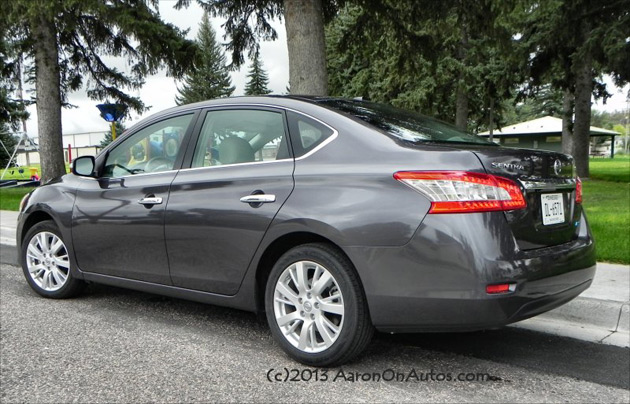 Those who climb into the new 2013 Sentra will also notice that the trim inside has become much more premium in look and feel. This segment is competitive and many are stepping up their game to make their cars more luxurious despite their small price tags and Nissan is pushing that to the limit. No more cheap plastic and lame monotone interiors can be seen on any trim level of the 2013 Sentra.

On the road, the 2013 Nissan Sentra SL drives well, handles nicely for the segment, and has enough output from under the hood to keep it moving without hesitation, uphill or down. Compared to others in this market, like the Honda Civic, Ford Focus or Mazda 3, the Sentra is more well-rounded. The Civic is probably it’s main competition here, being another nicely-rounded vehicle, while the Focus and Mazda 3 are sportier but lack the ergonomics the Sentra has.

For the driver looking to get a practical – but not boring – car, the 2013 Sentra is a great fit. Jumping up to the SL trim package is a must, we think, and well worth the few extra bucks. You won’t win races in the Sentra, but you won’t go broke owning it either and the ladies will appreciate your pragmatic, but stylish choice in cars.

Lexus Dials Up The Fun With F SPORT Models