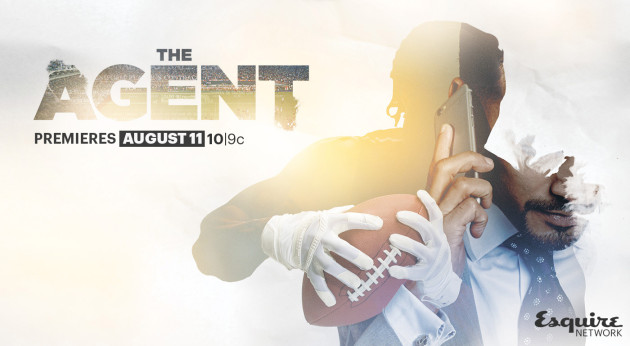 Behind every professional football player is an agent. Their clients make the plays on the field, but they run the game off the field. Esquire Network gives an inside look at the business behind America’s biggest sports obsession as cameras follow four top real-life ‘Jerry Maguire’ sports agents navigating the cutthroat world of professional football in The Agent. This 10-part documentary series premieres August 11 at 10/9c.

With exclusive access beginning last September, The Agent chronicles the journey leading up to the 2015 draft. From contract negotiations, endorsement deals, recruiting, private clubs and training to meetings with scouts and veteran players in the NFL, viewers will get raw insight into these behind-the-scenes business dealings. The relentless ambition, ruthless pressure and high-stakes of the pursuit to securing that top pick are revealed. Some call it the hustle and grind but it’s all about survival.

Forget about hokey shows like HBO’s Ballers, this is the real deal!

We had a chance to screen the premiere episode, and we were loving every minute of it! Their clients make the plays on the field, but they run the game off the field.

Related Topics:Esquire NetworkThe Agent
Up Next

Should NASCAR Make Changes To Improve Safety For Drivers And Spectators?

Finally, It’s ‘The Walking Dead’ Season Six Trailer That We’ve Been Waiting For!