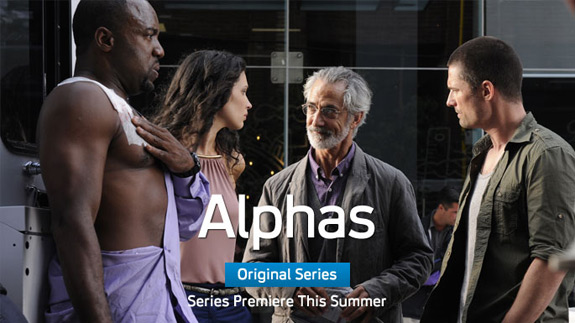 Since there isn’t much on television these days that is worth viewing, I gave Alphas a shot as it’s a show about ‘ordinary’ people with extraordinary abilities. Sadly, it only has one thing going for it and that’s the story so far. I’ll admit, they hooked me with the intro, but the disappointment came after the first commercial. I’m terribly vexed that Hollywood still hasn’t moved past the stereotypical characters and casting that make up a lot of their failures. I did get a chuckle though when I realized this show is little more than a live action Scooby Doo Mystery.

First up, Nina Theroux (Daphne) – Hyper Induction: Overrides the willpower in others. Basically, mind control, but only for a short time and it doesn’t work on everybody. There are two types women this particular hero character represents. Privileged white women, often good looking, who take what they want because they CAN, without fear of repercussion and average white women pushovers who exert very little or have no control over their own lives. I guess this is payback for years of being treated worse than animals on TV. Think about every successful TV show in history even when they started letting minority actors in. White women were always feeble, weak-minded and in distress. Always on the receiving end of violence and never held any jobs with substance. Possible “daddy” issues too, her bio says she’s a “troubled young woman”. Lame. They could have easily written this character for a male to play. Wouldn’t have seen that one coming… oh wait.

Next there’s, Bill Harken – Enhanced Strength from fight-or-flight response. While I can’t readily draw a comparison from Bill to a Scooby Doo character, he’s either a current or former FBI agent. That earns him a spot on the Scooby Doo Detective Agency. My problem with him is that I immediately knew what his power would be when he appeared on the screen BEFORE they showed us what he could do. How did I deduce this? Simple, he’s played by a husky, African-American actor. That’s pretty messed up you say? Maybe, but not as crappy as giving him super speed, like the Flash. O_O I was hoping they’d give him a cool power like telekinesis, since super persuasion was already taken, but deep down I knew. I hate when I’m right. He’s got anger-management and boundary issues too? Seriously? An angry black man with super strength? Where’s that come from? They’ve held the black man down for so long he wants to get revenge and break shit? COME ON SON!! +1 for giving him a heart condition if he ‘hulks out’ for too long. Can’t have an unstoppable, black man on TV going Nat Turner on everybody right? Well played Hollywood…

Then we have Rachel Pirzad (Velma) – Synesthesia: able to enhance her senses, possibly one at a time, but definitely at the expense of the others. This is hinted as the reason she can’t keep a man. No clue why they threw that in there. For example, they had a scene where she was enhancing her vision to find something at a suspect’s apartment and she couldn’t hear her partners calling to tell her that the suspect was returning and might catch her there if she didn’t get out quickly. Going back over the show a second time. I realize now that she’s supposed to be of Persian descent, maybe. I don’t really know. That’s part of my problem with her character casting. It took me a minute to figure that one out because I missed her last name the first time around. I thought she was either Latin-American/Hispanic or South Asian. The neighborhood where they show her for the first time is racially ambiguous and had an Anytown, USA type feel to it. She’s Plain Jane, not as good looking as the white woman in the bunch but not busted either. Her character while highly intelligent has a respectable ability with a ginormous flaw, but she is forgettable and blends in with the background noise. Can’t have her competing with the lead white lady.

Speaking of background noise, we have Gary Bell (Scrappy Doo). The high-functioning autistic kid who can see ALL electromagnetic wavelengths. General consensus from all I spoke to who watched the pilot is that this kid is JUST as annoying as Scrappy Doo was, if not more so. I can’t really agree with that. I mean the kid has autism, which if you didn’t know, is a mental condition, present from early childhood, characterized by great difficulty in communicating and forming relationships, and in using language and abstract concepts. Lamely ironic that he is able to see all types of communications. The actor is doing his best Rain Man impression, but is apparently failing and is not quite as endearing as Raymond Babbitt. He’ll get better as an actor over time. Maybe.

Tying it all together is the doctor (Shaggy), who appears to be a psychiatrist. A Hippy with massive amounts of money as evidenced by his posh house. The father figure, since most of our group of specials need one and mentor I guess. He’s the glue that binds the group together and gives them their mysteries to solve. The doctor is also the liaison for the huge TV cliché. I mean the shady government guy (SGG). That role is probably the only role that is perfectly cast, being played by the guy who played Leoben from Battlestar Galactica.

He tells the viewer, through the doctor that the Alphas, a group of people with special gifts/powers/abilities are back in play. Doc calls them extremists, SGG calls them terrorists, potato poTAHto we’ve got to find them and stop them, yadda yadda yadda. Even though he’s the first we see on screen, we don’t find out that Cameron Hicks (Fred) is an actual Alpha until half-way through the show. Hyper-kinesis according to the show is “extraordinary balance, perfect aim, and synchrony between thought and action”. He’s not really part of the team either as he just wants to find out who it was that manipulated him into killing. Fred would be on his merry way to jail for murder, if the doctor hadn’t intervened and blackmailed him into staying on board because he’s exactly what the team needs and vice-versa.

With plenty of good examples of characters that don’t fit a particular mold, Hollywood continually defaults to this kind of crap. Why are they afraid of trying something different? I will continue to watch to find out who this “Alpha Group” is and what they want. In the meantime I can ignore the fact that our merry band of special detectives roll around town in their very own Mystery Machine.