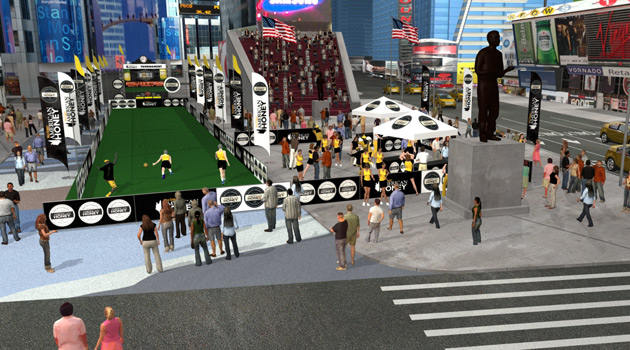 The American favorite kickball game is finally getting the Broadway treatment it deserves. Football legend Donovan McNabb will serve as the celebrity team captain / host for the first-ever kickball game to take place in Times Square.

Wild Turkey American Honey, the original honey bourbon liqueur, will celebrate the launch of its Bar-sity Athletics social sports initiative by turning Times Square into the ultimate social sports stadium for a charity kickball game not to be missed. McNabb will be paired with participants from NYC-based social sports league Zog Sports and the 2013 American Honeys to compete in an once-in-a-lifetime exhibition game featuring the pomp and circumstance of a major league sporting event. The winning team will receive a donation to the charity of their choice through Zog Sports’ Play for Your Cause.

Spectators can watch McNabb in action on the field, as well as participate in a kickball homerun derby and other activities. All events are free to enjoy (21 years of age and older) and open to the public.

If you’re in the city next week, be sure to stop by and check this out!