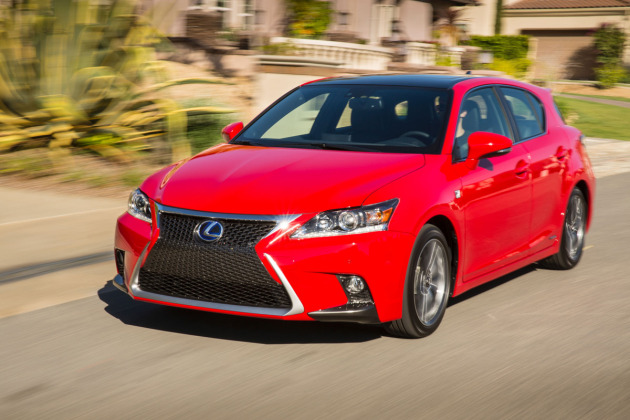 The 2014 Lexus CT200h is the entry-level hybrid in the premium maker’s lineup. Being entry level doesn’t mean it’s cheap, though. Despite the low price, the CT200h offers a lot in the way of looks, refinement, and efficiency. Think of it as a Prius, only pretty.

The 2014 CT200h has a great look. The word “sleek” is easily used here. In the F-Sport package, as we had it, cool accents like a black glass-like roof, auto-leveling LED headlamps, F-Sport specific wheels, and a lot of other accents bring the already good-looking CT200h to the next level.

With all that style also comes great versatility. (To paraphrase Spidey’s uncle.) The hatchback design is open and big. For such a small car, the CT200h offers a lot of interior room and useful cargo utility. Although some might note that the interior isn’t as finely appointed or posh as other Lexus vehicles, it should also be noted that none of those others have the same low sticker number and appeal that the CT200h does. This car is meant for a different market from the usual Lexus crowd. 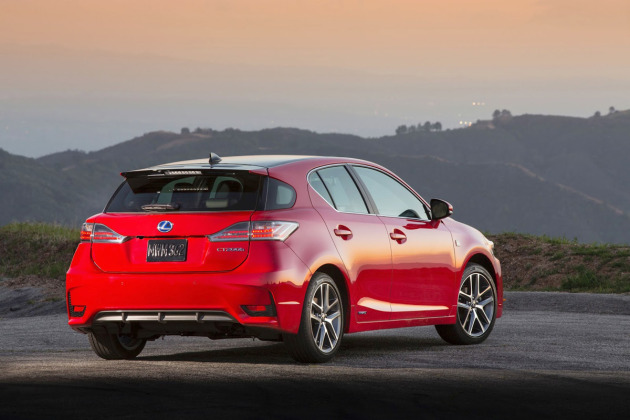 Then there’s fuel efficiency. The 2014 Lexus CT200h has a combined EPA rating of 42 mpg. That’s 40 on the highway and 43 in town. In a week of driving with this car, which included multiple passengers and a lot of highway time, we saw about 40 or so as the norm. Those who live in a more suburban environment will see more than that. Performance lovers, however, should note that this fuel efficiency comes at the price of acceleration. If you’ve driven the Prius, you’ll have an idea how the CT200h accelerates. On the other hand, it doesn’t sport the dead-fish handling and ride characteristics of the Prius nor does it have the “living by the airport” interior sound quality.

The 2014 CT200h rides well and drives well if you aren’t hung up on breaking land speed records. This car is built for style and efficiency and those who decide to purchase one will recognize that. On the other hand, there are options from other makes that will fill the role of sporty in-traffic movers that have roughly the same wagon-like versatility and price point. You won’t find one that spends less time at the gas pump, though.

The base price for the 2014 Lexus CT200h is about $32,000. For that, you get a premium vehicle that is quiet on the road and fuel-sipping in the process. Ours added the F-Sport package elements, navigation, and Intuitive Park Assist and rang in at $40,630 before destination fees. Those additions, however, take the CT200h from “premium” to “entry-level luxury” quickly and add a lot of comfort and nice interior and exterior highlights that really bring out the looks for this car. Unlike most Lexus vehicles, though, the CT200h lets you mix-and-match a lot of these add-on packages, so if budget is a concern, you can do away with a few to lighten the sticker. For example, Intuitive Park is stand-alone and the F-Sport package is actually two optional additions that can be taken either-or. 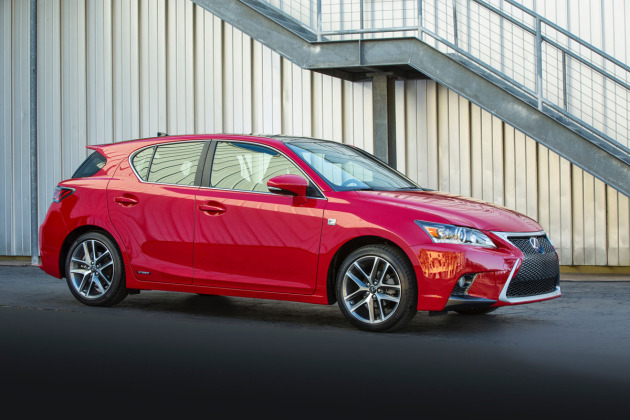 Under the hood, the 2014 CT200h is essentially a Toyota Prius with better handling. The 1.8-liter four-cylinder engine runs through a CVT coupled to two electric motors to output 134 total horsepower. This front-wheel drive system gives a 0-60 that is average (10.4 seconds), but not sprightly. In return for this sluggish movement in comparison to a few of the other options in this market, though, the CT200h delivers a phenomenal 42 mpg combined.

On the interior, the 2014 Lexus CT200h is classy, but not as upscale as some of the more pricey Lexus vehicles are. Taken at face value, however, the CT200h is very comfortable despite its small size, and all seating positions are good. Those of large size, like myself, will be happy with the front seating, though the back seat can be a bit cramped for the knees if you’re over six feet. The small rear doors also make getting in and out of the back seat cumbersome for some ? a common trait in the small car segment today. Luggage space is about average for this size of vehicle, but the folding seat options and big fifth door access give it a lot of usefulness beyond the first-glance appearance. 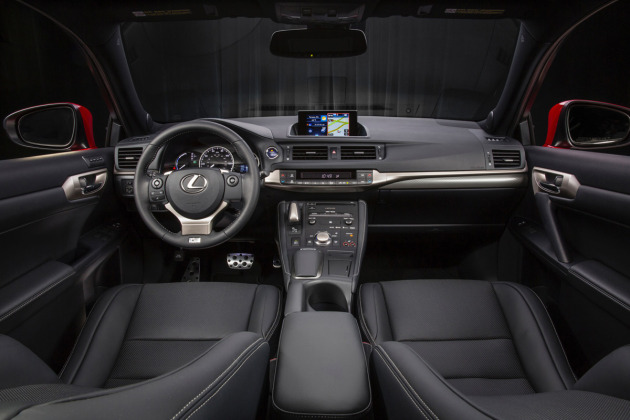 Finally, for the urbanite and suburban living owner, the CT200h offers some great in-town driving dynamics. It’s maneuverable, absorbs small road impacts well, and the stop-start and swap to electric-only are seamless. Like most well-done Toyota hybrids, the CT200h gives no indication of mode swapping unless you are looking at the dash to see them.

All together, we found that the 2014 Lexus CT200h is a good car for the money spent. It offers the benefits of the Toyota hybrid system without the poor handling and loud noise levels of many of the others of that description. It’s a good mix of affordable Toyota build and premium Lexus quality and drive dynamics.

Related Topics:2014 Lexus CT200hLexus
Up Next