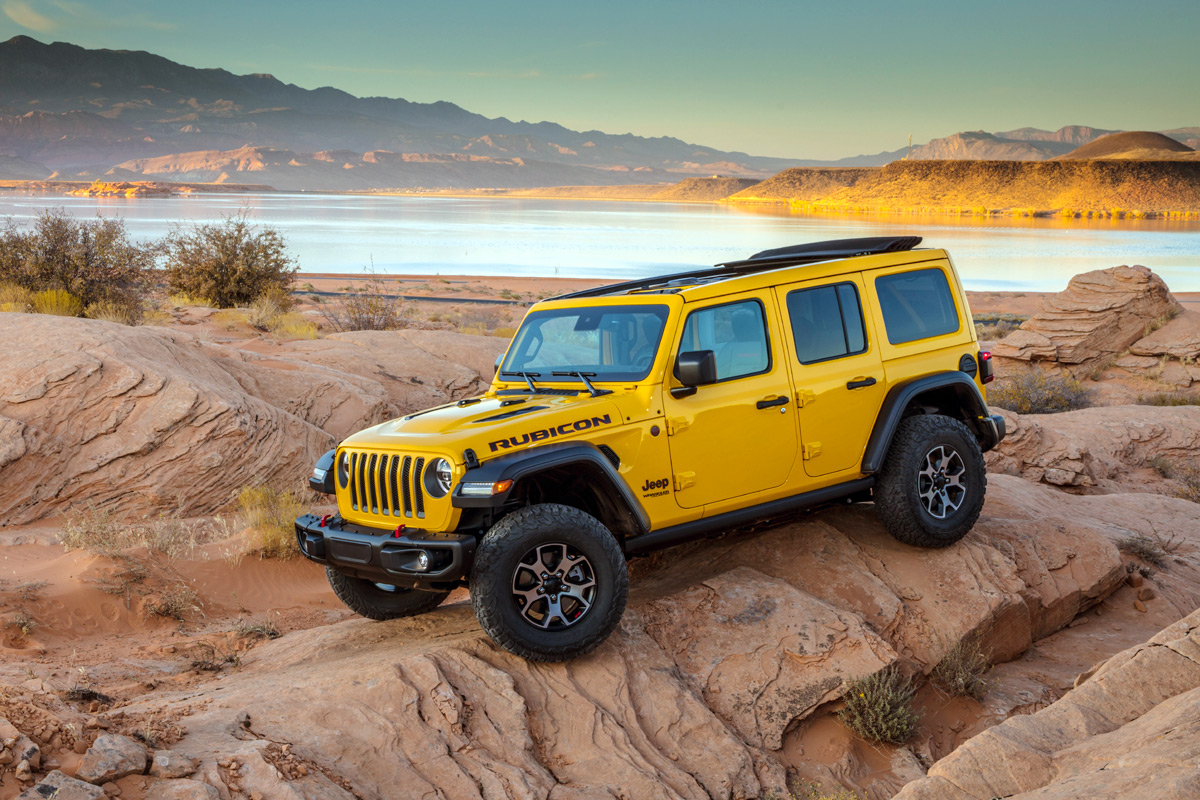 Jeep fans can finally pump their fists in solidarity as diesel fans finally have a from-the-factory option in the Wrangler. Long sought after by enthusiasts, the 2020 Jeep Wrangler EcoDiesel opens up the floodgates for off-road good times with maximum torque and economy.

The 2020 Jeep Wrangler became available with a diesel engine this year, after being revamped 2 years ago for the current-generation of the legendary off-road rig. The 3.0-liter turbodiesel engine will be familiar to Fiat-Chrysler fans as the engine that powered the Grand Cherokee in its diesel days and as the current diesel of choice for the Ram 1500 truck. This is a well-vetted engine made by Fiat in Canada. It’s also the diesel likely to arrive for the Jeep Gladiator in the next year. 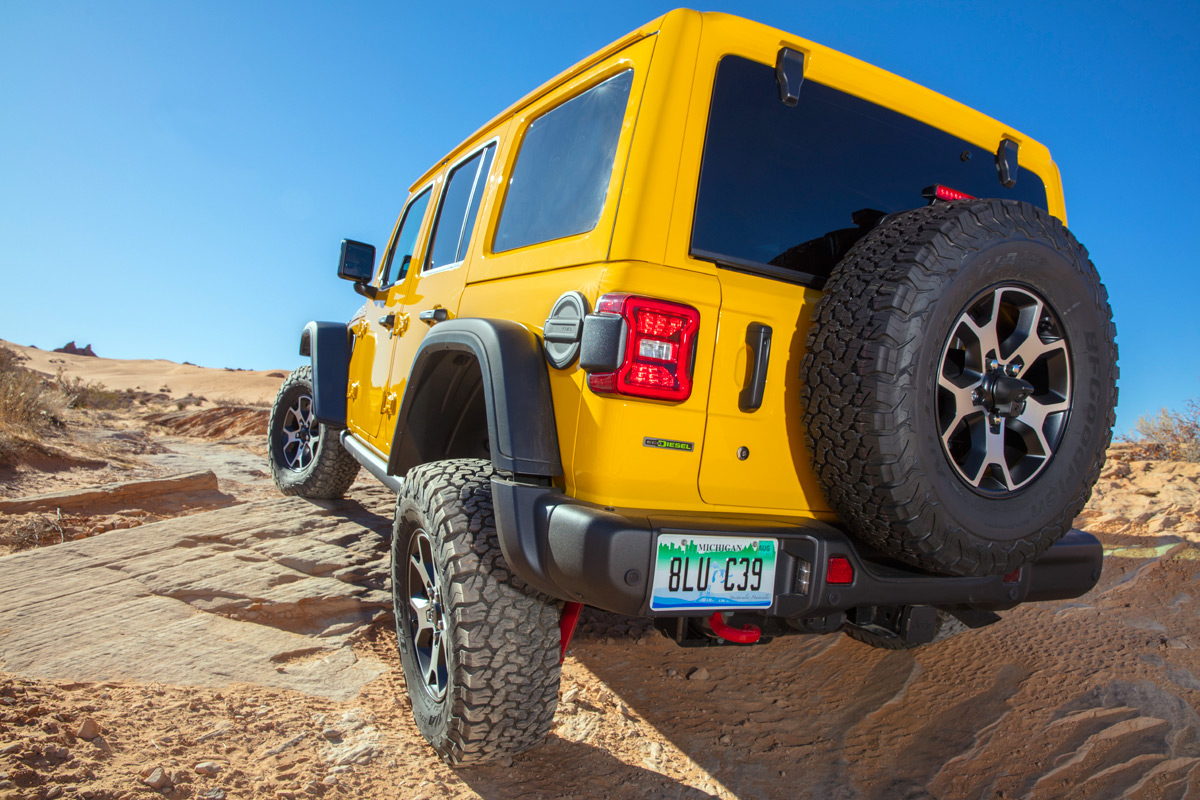 The 3.0L engine puts out 260 horsepower and 442 pound-feet of torque. It pairs to an 8-speed automatic transmission (the only option there) and offers more grunt for the pedal press. For comparison, the standard V6 gas engine for the Wrangler puts out 260 pound-feet while the turbocharged four-cylinder option puts out 295 lb-ft.

Jeep hasn’t adjusted the towing options for the Wrangler with the EcoDiesel, which remain at 2,000 and 3,500 pounds for the two-door and four-door respectively. Why’s that? The towing limits for the Wrangler are wheelbase and frame limits, not powertrain limits. 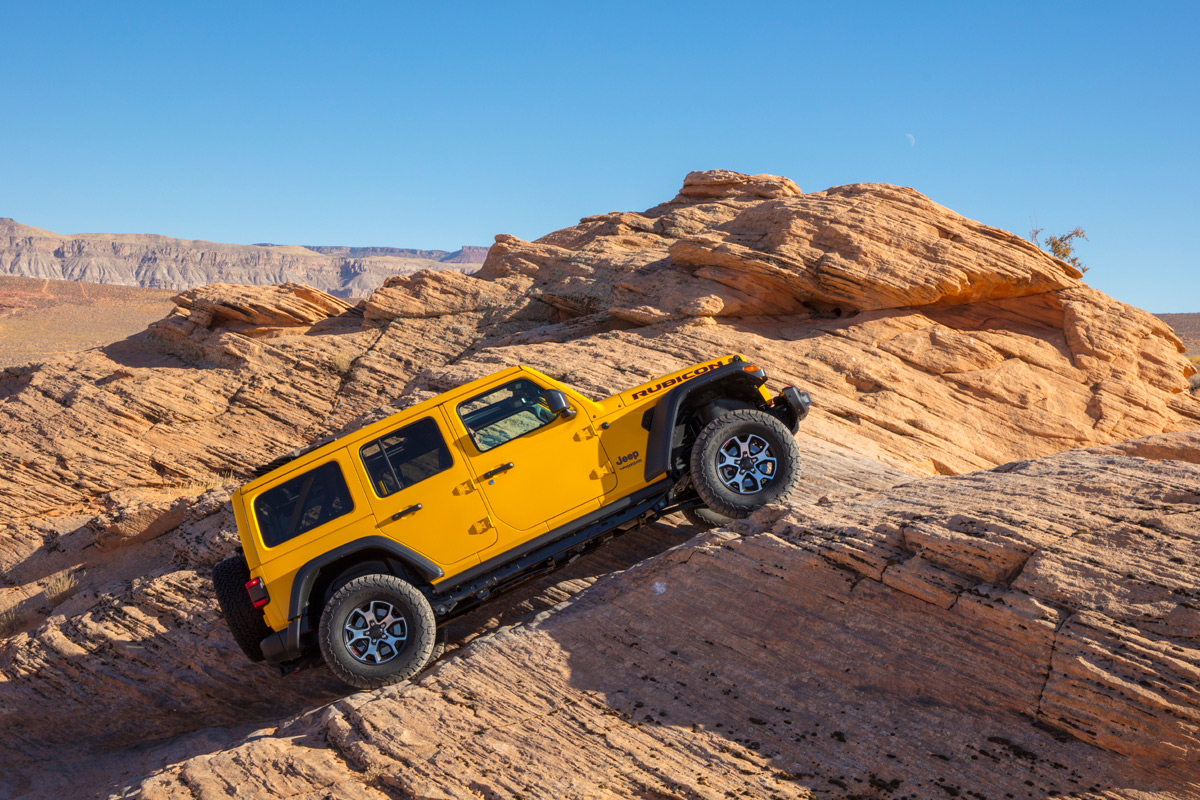 Where the diesel really shines, though, is in deep off-road. All that torque comes fairly early, as diesel outputs are at lower RPM rates, and really kicks it when the tires need a lot of grunt to get the rig moving through or over an obstacle. Which is why so many Moab rigs involve taking older Jeep models, adding larger tires and more robust suspension, and then dropping in a diesel engine.

The 2020 Jeep Wrangler EcoDiesel we drove was a Rubicon model, the top shelf off-road setup Jeep offers. And it’s more than the benchmark for offroading, it’s the production vehicle that no other off-pavement vehicle on the dealer’s lot can match. With its legendary two-speed transfer case, extremely robust Dana axles, and 10.8″ of ground clearance (nevermind extreme approach and departure angles), the Wrangler Rubicon rules the dirt. And mud and rocks and everything else. 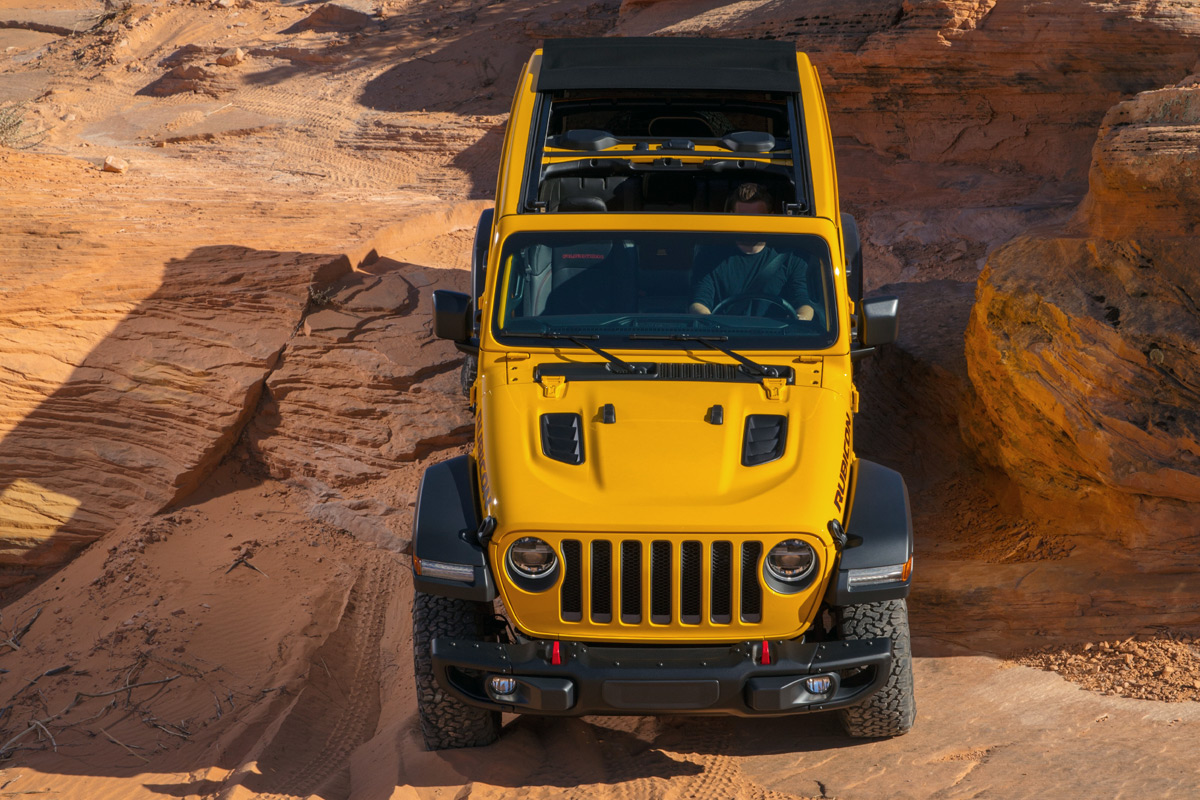 It doesn’t rule the pavement though. The Jeep Wrangler, especially with the Rubicon package, has always been a rough ride on the highway. That said, this latest-generation Wrangler is way smoother than any that came before and the diesel adds a fuel economy boost that’s also a big upgrade for those who travel in their Jeeps before getting to their no-more-roads destination. The 2020 Wrangler with the EcoDiesel is rated at 29 mpg on the highway.

Our Wrangler Rubicon tester got close to that at 28 mpg, which makes perfect sense as it’s the heaviest of the Wrangler trim levels. The good news is that getting that MPG didn’t take any effort on our part. To compare, the 29 mpg rating the Wrangler receives for its diesel is a full 6 mpg higher than the V6 is rated and 5 mpg higher than the new 2.0L turbo gas engine (which requires premium fuel) achieves. 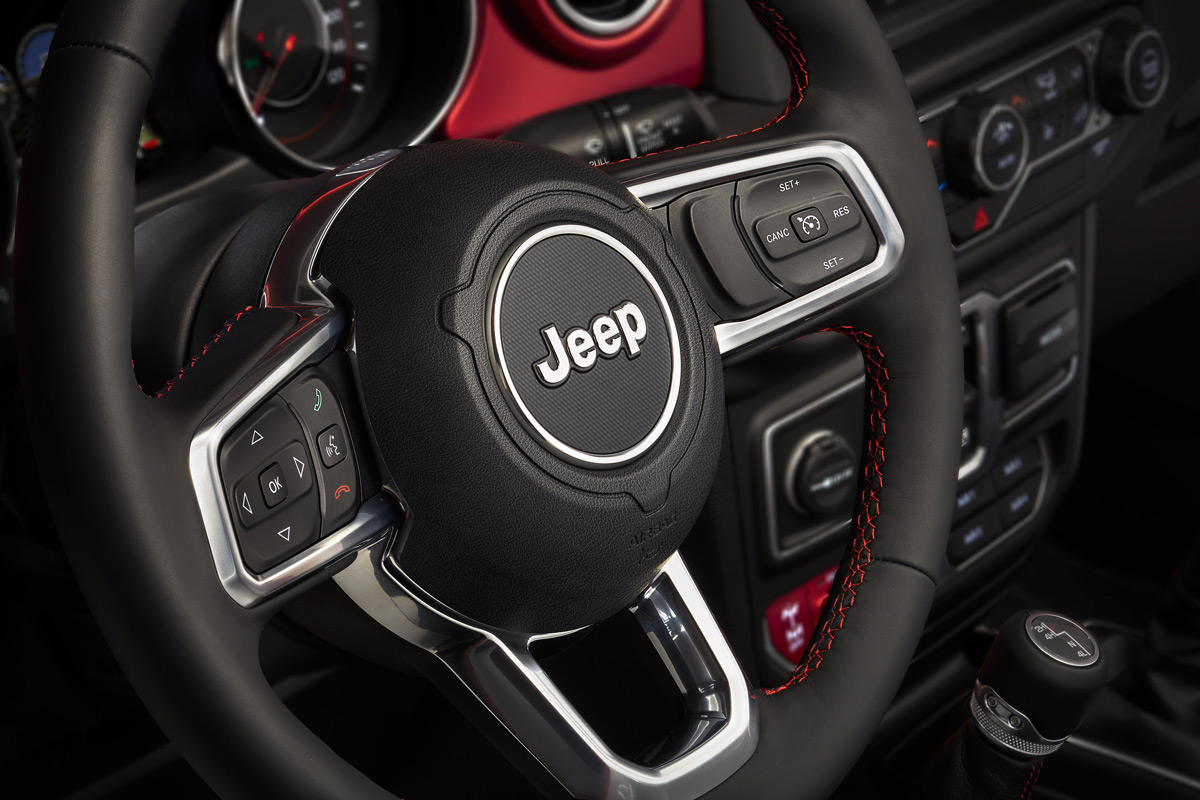 The new generation of the Wrangler also upgrades a lot of other things for the off-road legend. The interior is still all Jeep, of course, but refined touches like better seats (they’re now very similar to those found in the Cherokee and Grand Cherokee), a much-needed infotainment upgrade with the latest Uconnect system from Chrysler, and larger bezels for the gauges so they’re easier to see in varied lighting situations. The back seat in the four-door model is also upgraded to be a much more comfortable bench.

None of those interior upgrades come with downgrades to the rest of the truck. The Wrangler Rubicon can still go almost anywhere you want it to get and in all but the most extreme of temperatures, the diesel will make that happen with more grunt and less fuel. One downside to the diesel, however, is its noise level. The engine is seriously loud. Like almost at the firing up a Hellcat and waking up the neighborhood kind of loud. To be fair to Jeep, there isn’t a lot of sound deadening option with a design like the Wrangler’s, so keeping the noise down was probably an engineering feat that the designers decided wasn’t worth the cost. 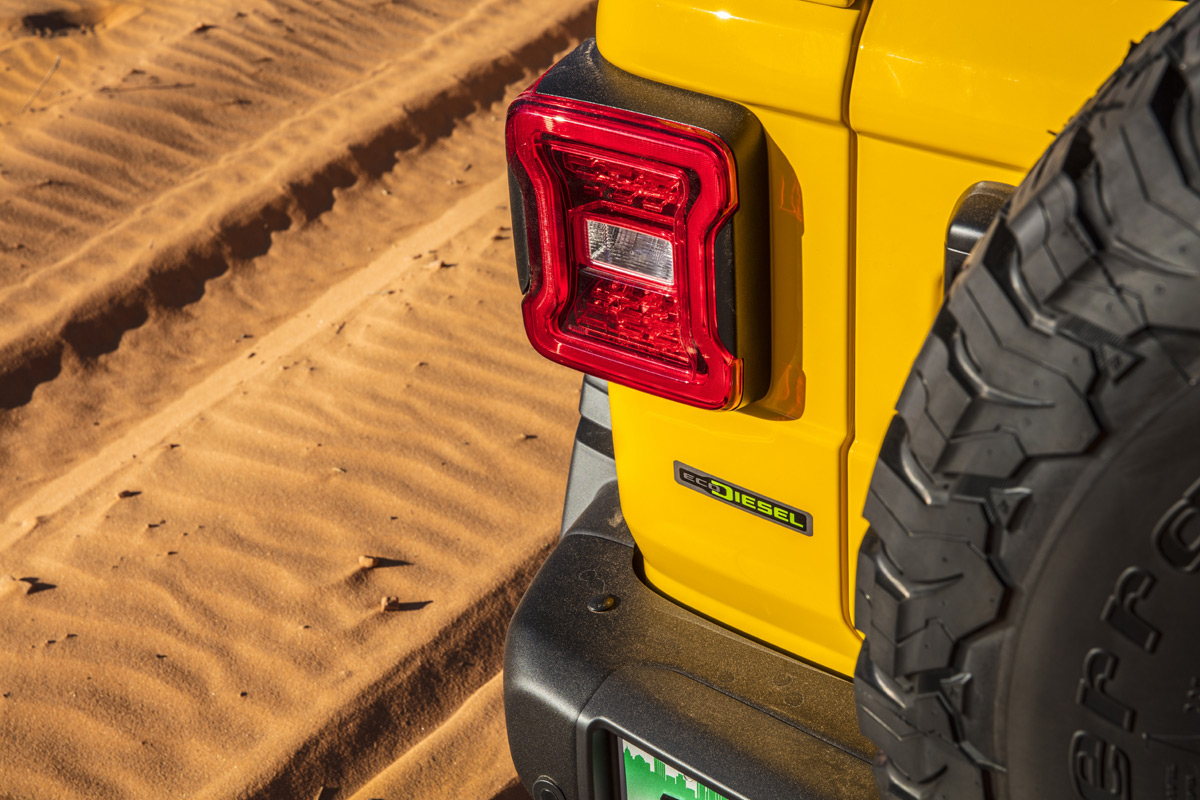 For some folks, the noise from the EcoDiesel engine serve as a badge of honor, indicating that they’re driving the ultimate factory-made Jeep Wrangler.

In all, the 2020 Jeep Wrangler with the EcoDiesel option is a great addition to the iconic Jeep. It adds a lot to the vehicle and is well worth the price. The Wrangler Sport is the lowest entry point for diesel at $37,795 while the Rubicon starts at $47,795 plus destination.