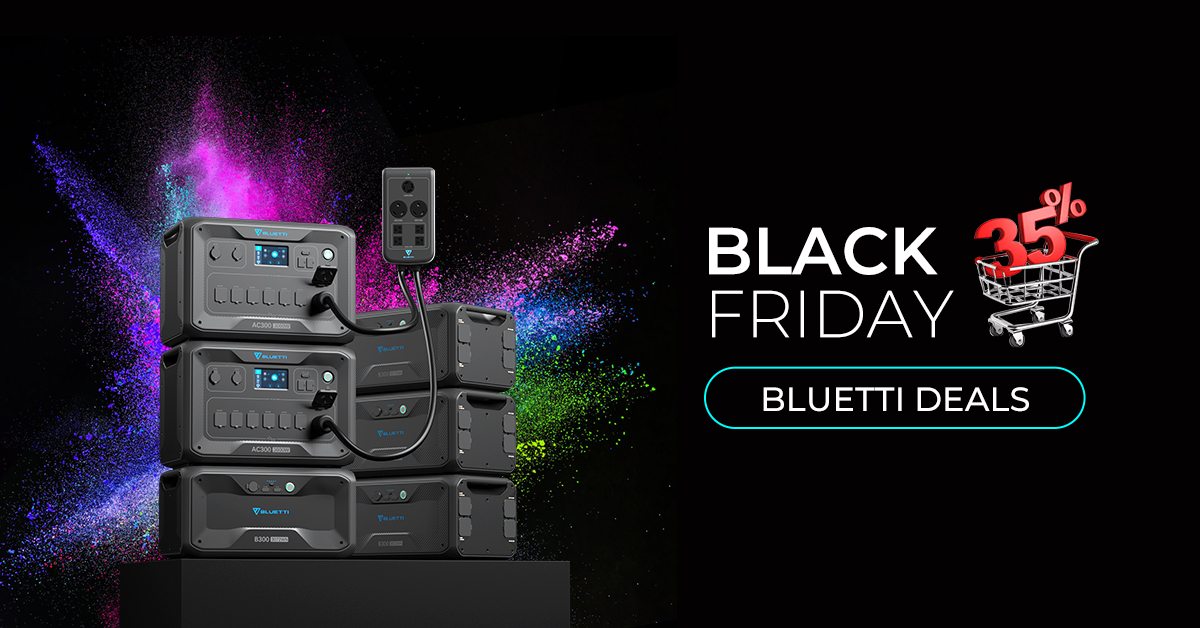 Looking to save some money this Black Friday? Well you’re in luck, because BLUETTI has some great deals that are sure to get homeowners, vanlifers, RVers and campers excited, with some of the biggest discounts they’ve ever offered on their entire product line of products!

We’ve been talking about BLUETTI for months now, as we’re huge fans of their portable power generators and other offerings. If you’ve been thinking about getting on, there’s no better time than now to finally pull the trigger given these prices. So grab your wallet, because you’re not going to want to miss out on these deals.

Here are the three best Black Friday deals they’ve got to offer: 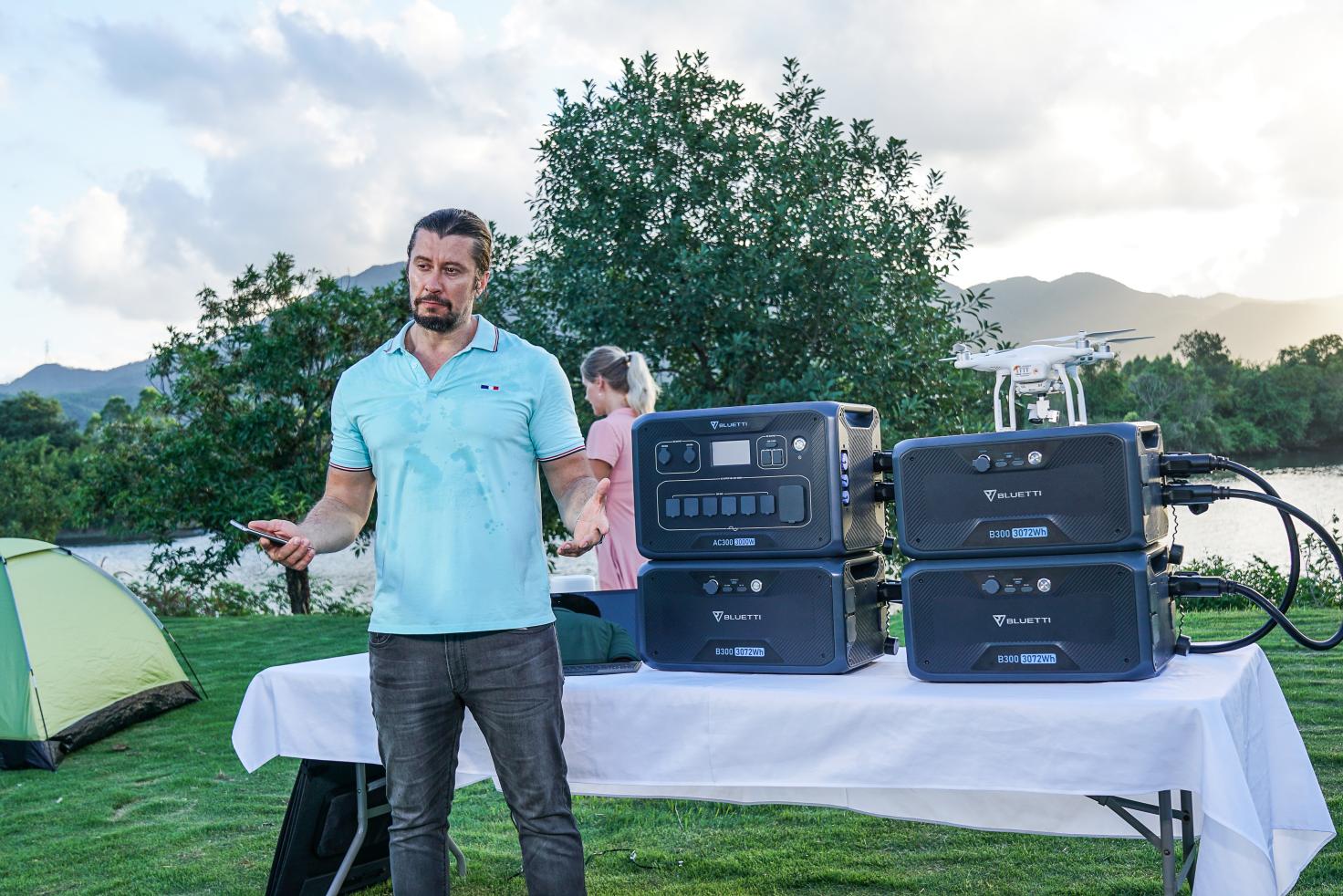 For the homeowner looking for unlimited power:

A 100% modular power system, the BLUETTI AC300 and B300 battery modules are some of the most popular solar products on the market, and for good reason.

Each AC300 can accept up to four external B300 batteries packs, bringing the systems overall capacity to a whopping 12,288 Wh! Needless to say, with this kind of power on hand, you’ll never have to worry about running out of juice… 😉

The major benefit of owning a modular solar generator comes down to portability. In the past, transporting that much power was a tedious task, if not impossible for some. Now, Bluetti has paved the road of innovation, making the transport of vast amounts of power, not only easy (especially on your back), but possible.

The B300 battery modules use top-of-the-range LFP (lithium ferrophosphate) cells, making up 3,500-plus life cycles. To put it simply, these are some of the longest lasting solar generators on the market today.

Furthermore, the AC300 can be charged with both AC and solar simultaneously, whilst being connected to two B300 battery modules. Additionally, the BLUETTI AC300 also allows for the connection of the new BLUETTI Fusion Box Pro, which will double the voltage, power and capacity up to 6,000W, 240V, and 24,576Wh. 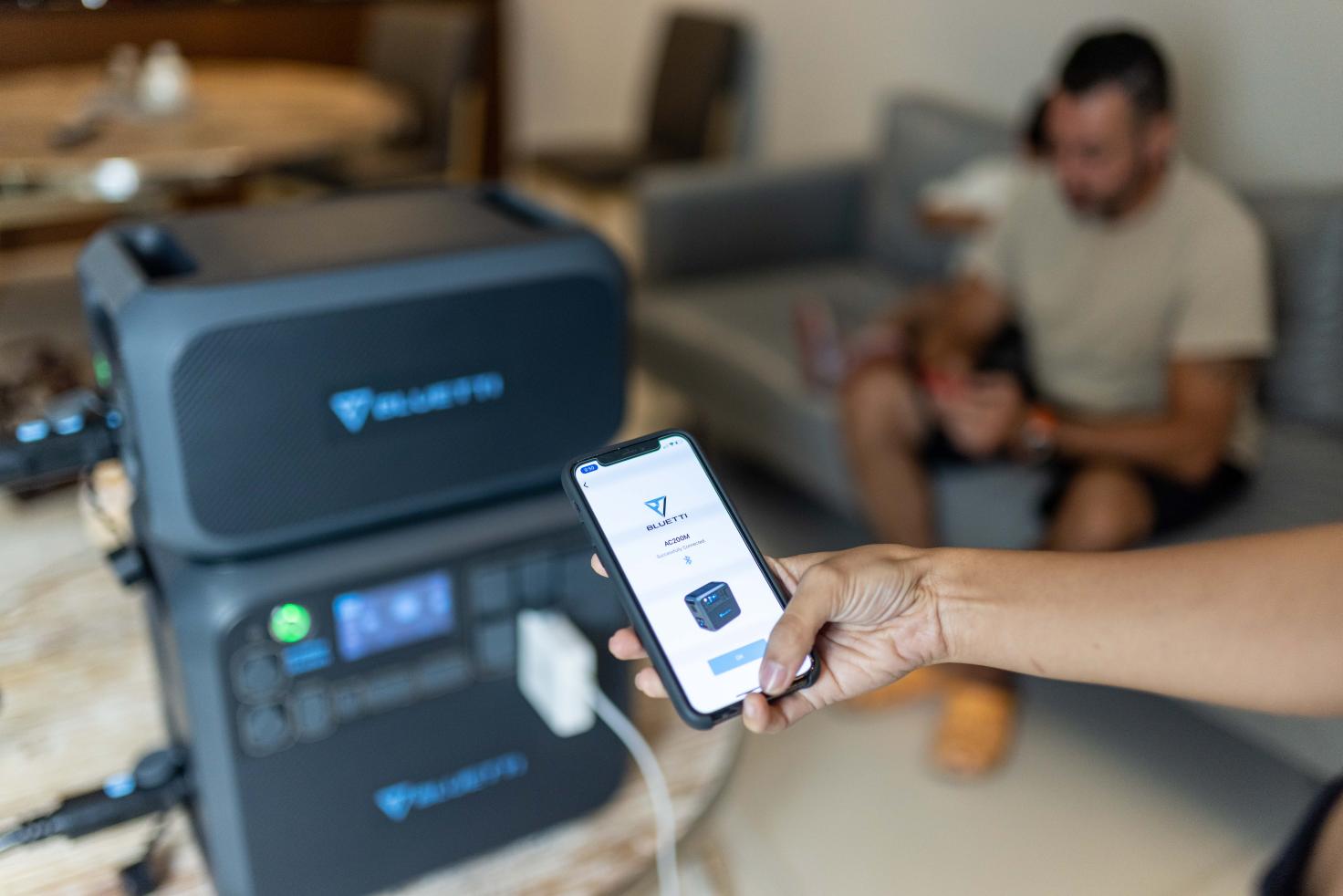 For the unexpected power outage:

The BLUETTI AC200 MAX is the all-around upgraded version of BLUETTI’s long-loved classic model, the AC200 (which was originally launched on the crowdfunding platform Indiegogo, where it was an overwhelming success).

The BLUETTI AC200 MAX can also be charged quickly up to 80% with direct sunshine using solar panels in around 2 hours, allowing you to stay off the grid as long as you’d like. 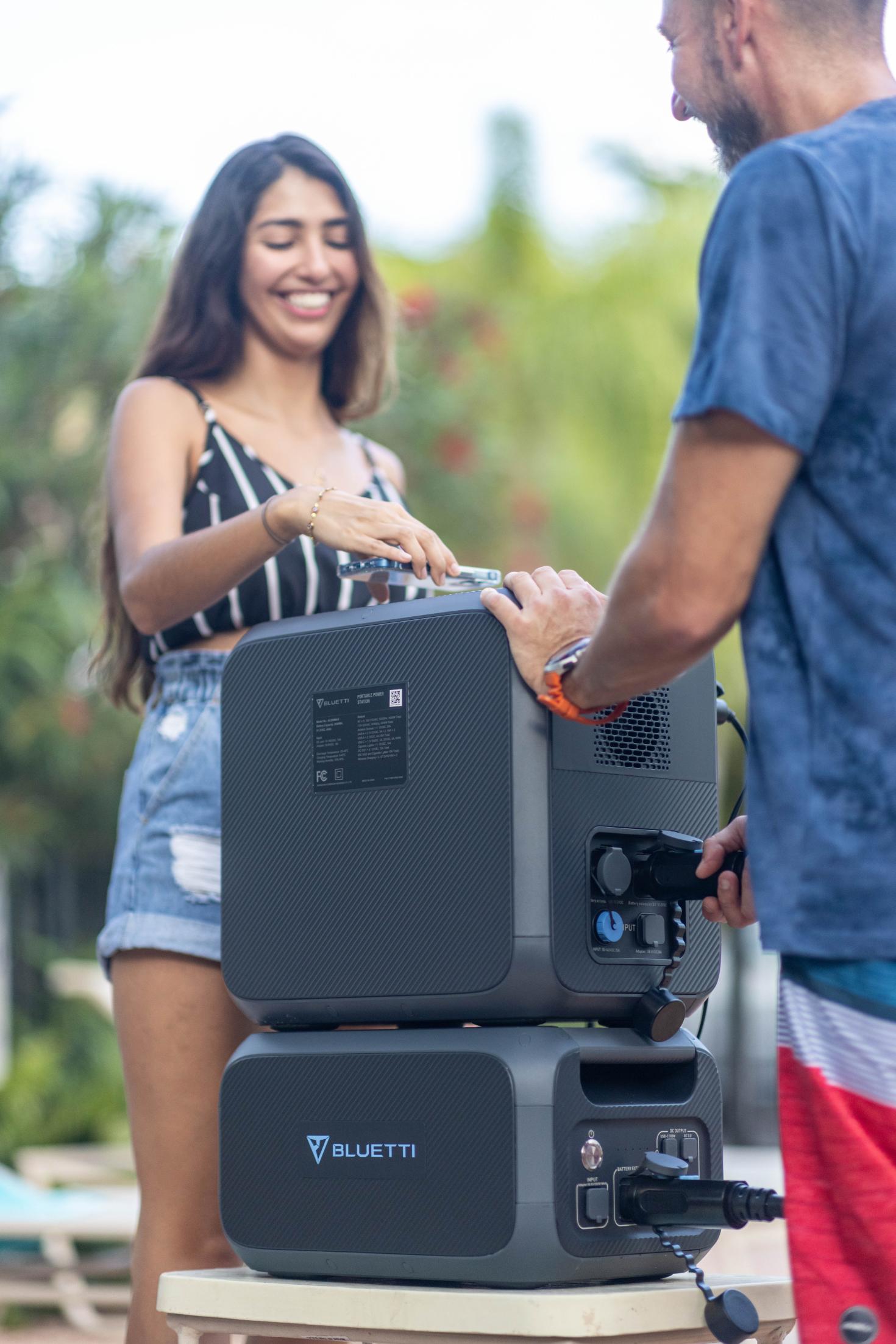 For the perfect camping trip:

Portable solar panels are a great compliment to portable battery power stations when you’re off the beaten path and wall outlets are nowhere to be found. The BLUETTI PV120 and PV200 are foldable solar panels specially designed for campers, van dwellers and for small/medium-size off-grid solar systems.

BLUETTI’s PV120 and PV200 solar panels are made with monocrystalline solar cells that are arguably the most effective solar cells available on the commercial market today. This is largely due to their ability to produce a high amount of clean power even when sunlight is at its truest form.

With greatly improved shading performance, the BLUETTI PV120 and PV200 portable solar panels won’t significantly loose efficiency when any part of the solar cells are blocked by shadows, trees or other sun blockers. And that’s a huge selling point right there! 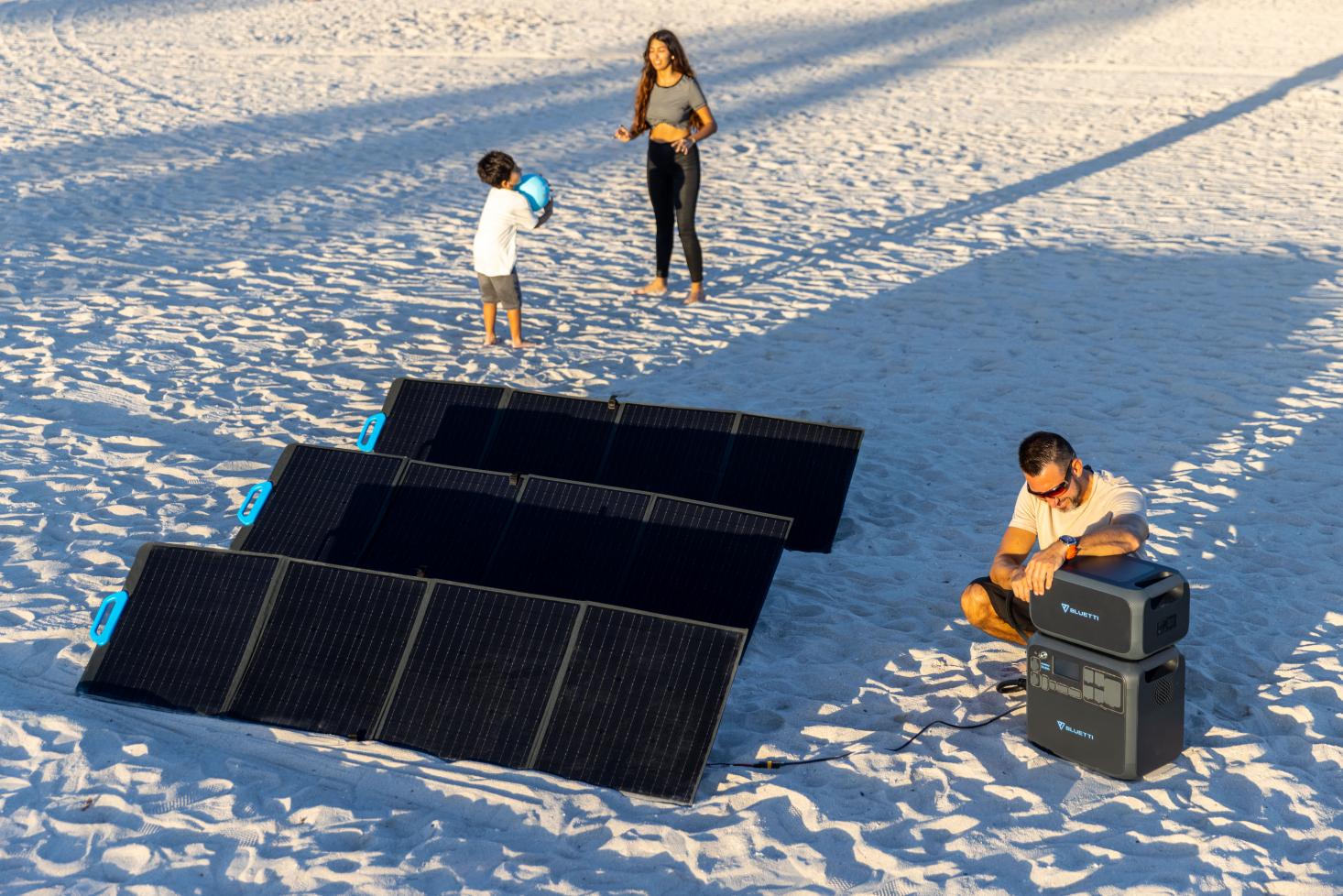 But that’s not all. Below you can see some of the other BLUETTI Black Friday deals:

You can check out all of the BLUETTI Black Friday deals at bluettipower.com. But don’t wait too long, because with prices this low, they’re sure to sell out fast!

Related Topics:Black FridayBLUETTI
Up Next