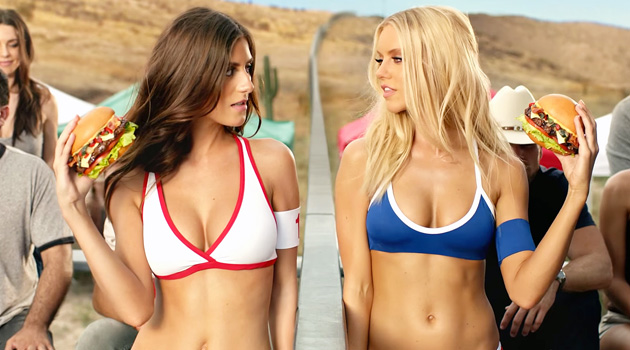 Carl’s Jr. is famous for their racy commercials featuring scantily clad models eating enormous stuffed burgers full of drippy condiments. It’s a formula that’s worked for them, so why change it now? As you can see from the video above, the popular burger chain is continuing that tradition, with a little political commentary thrown in for good measure. But don’t worry, it’s all very tongue in cheek.

Carl’s Jr’s new commercial for their Tex Mex burger features two models in bikinis representing the U.S. and Mexico playing volleyball over a border fence acting as a net. While playing borderball, the two models argue whether the hamburger is “Tex” or “Mex.”

Carl’s Jr. claims the new ad for the Tex Mex Bacon Thickburger was not intended to be a political statement and is simply a fast food ad. Either way, with sexy burger chomping, skimpy bikinis and the occasional slow-mo butt slap involved, we’re not complaining!

What do you think of the new Carl’s Jr. Tex Mex Bacon Thickburger “Borderball” ad?